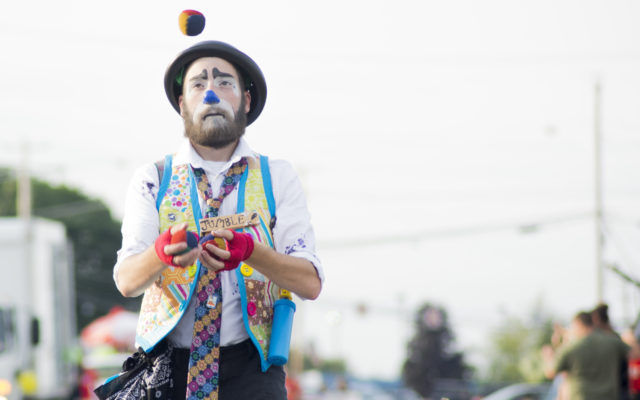 The awards, including six first-place individual honors, were announced during the organization’s fall conference held Friday and Saturday, Oct. 23 and 24. While in other years award winners have attended the conference in person to receive their awards, this year’s event was virtual because of the pandemic.

“It would take more than a pandemic to keep the dedicated staff at these newspapers from doing the high quality work that readers have come to expect,” Julie Harris, senior editor for the weeklies, said.

“I am proud of each person’s accomplishments and each paper’s representation in this industry recognition, and see the awards as testament to the dedication each one has to the communities we serve. It is a privilege to work beside them every day,” she said.

The following is the list of awards presented to each weekly newspaper and its staff in alphabetical order:

Judges of the feature photo category praised Bouchard for capturing the clown’s emotion in his photo of Jumble the Clown taken during the Caribou Cares About Kids parade.

Bouchard’s writing awards included one in investigative reporting for “Caribou agrees to pay $45,000 to former employee to settle discrimination complaint,” which judges said demonstrated good investigation and clear information from both sides; and one for an education story on “MSSM ranked best high school in Maine, second best in the country,” which judges said was well written and informative and did a good job of giving a perspective from different people.

The third writing award was for the health story “Community shares stories of hardship and hope during Overdose Vigil” — an overdose awareness vigil where people told their personal stories and experiences.

“[It is a] great story that I appreciated the writer not ‘over quoting’ when it is tempting in a story like this. The writer gets straight to the heart of what the people being interviewed were trying to get across,” the contest judges commented. 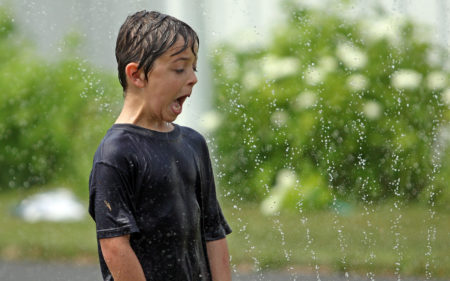 Aiden Macomber of Island Falls reacts to getting sprayed with water from the sprinkler at the Island Falls Municipal Building parking lot during the 2019 Island Falls Summerfest. (Joseph Cyr | Houlton Pioneer Times)

Cyr received second place in people photo for his image of the surprised look of a boy getting splashed that went with a story on Summerfest. His other photo award for Pioneer Times was a third place in news photo for another image from the same Summerfest of sisters Amy Detour and Rebecca Drew, who were dressed as “Pink Ladies.”

“Love the mood of humor and fun captured in this photo. The clarity is awesome too,” judges said about the “Pink Ladies.”

In the writing categories, Cyr was awarded a second place in food feature story for “Dance students get taste of potato picking,” which was about dance students from Gardiner who learned about hand-picking potatoes by doing it.

“[I] really enjoyed the writing — trading tutus, etc. was a fun intro. [Cyr] managed to tell a fundraising story in a way people could get involved with,” a contest judge said.

Judges said the Cary Plantation story “makes clear the reasons and advantages to dissolution of town government, addressing the concerns and fears of the residents but adding a hopeful voice.”

Reporters Jessica Potila in Fort Kent and Morgan Mitchell in Madawaska each received four awards for their work. 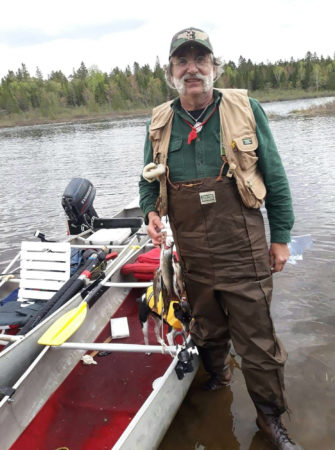 Michael Fiori is seen with a pair of tandem canoes in the wilderness of northern Maine on Monday, June 4, 2019, just hours before he and his brother Larry ended up in a fight for their lives when the canoes capsized in 50-degree water. They were saved with help from New Hampshire scouts who happened to be camping nearby. (AP Photo/Larry Fiori)

Potila had two first-place awards. One was for an outdoors story on “Allagash guide bags 200-pound, 20-point monster buck of his own” about a professional guide who helps hunters find their trophy game in the Maine woods but who found a trophy for himself on the last day of hunting season.

“This is the kind of stuff you won’t find in big newspapers. Love it!,” a judge commented.

The other first place for Potila was in the spot news category on “Brothers credit Scout Troop with saving their lives after canoes topple them into cold northern Maine lake.” The two brothers nearly drowned in the cold late spring lake. Potila was able to interview one of them on deadline about their ordeal to make an ordinary press release on a boating incident much more interesting.

“[This story] is the result of good old-fashioned legwork. Well done,” a judge said in comments.

Potila placed second in the court story category for “Fort Kent group takes objections to Valley Unified site selection process to court.” She also received second place in the sports news story category for “Fort Kent student recognized for his ‘Spirit of the Game’” about a student in Fort Kent who participates in the basketball team even though he has a physical disability. A judge sent the student a message in his comments about the story: “[I] hope he has a long, enjoyable career in this profession [journalism].” 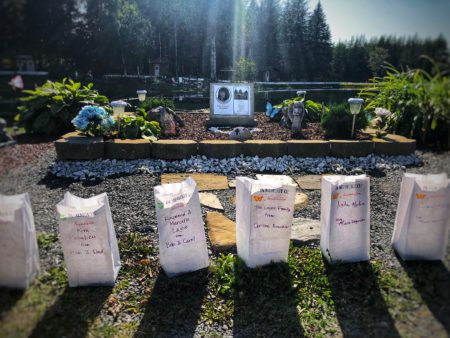 One of the many beautiful memorials with luminarias that line the path around the pond at Mizpah Aug. 25, 2019. (Morgan Mitchell | St. John Valley Times)

Mitchell placed second in religion/spirituality with “Mizpah brings healing to mourners at Walk Around the Pond,” garnering comments from the judges such as “nice blending of information on an upcoming event, with the spiritual impact the place has had on people.”

Mitchell also had two third-place awards. One was for local columnist on Morgan’s Recipe Series, which has a personal story and a favorite recipe with a video on preparing it; and one for a sports profile “Teen girls earn lineman of the year, offensive MVP on Valley league football team”

“You have to enjoy it when youngsters get out of their comfort zone to try a new sport. Football takes a tremendous work ethic and dedication. Enjoyable read,” a judge said in comments.

Besides the individual awards, The Star-Herald placed third in general excellence for its category of weeklies, which is based on circulation. The judges commented that The Star-Herald is a good-looking paper full of well-written news and articles. They also liked the  way photos are played big enough for impact when appropriate.

Reporter Nina Mahaleris took first place in people photo for a picture of John Kennedy shown with a hat that had belonged to his friend who was killed in a homicide. It was part of the story “‘Couldn’t ask for a better fella,’ friends and neighbors share memories while grappling with untimely deaths of two Castle Hill men.”

She also placed second in news photo with a Presque Isle High School graduation picture that really told the story of “Presque Isle graduates reminisce on past, make plans for the future.”

“Love the focus on this young man but yet showing the looks of the fellow students along with him waiting with excitement,” a judge commented on her entry.

a lonely death.” The series focuses on the growing drug problem in Aroostook County. A judge commented on “great reporting and storytelling. The reporter really draws you in.” The first story in that series also garnered attention from the governor’s office when Gov. Janet Mills read the opening paragraphs during a drug symposium in Augusta to illustrate that drugs are not just a big-city problem in Maine. 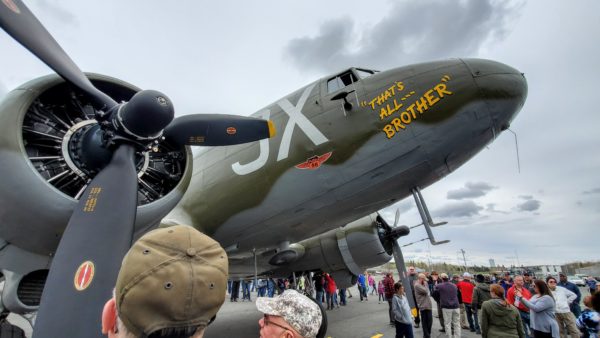 Crowds filled the general aviation area near Presque Isle International Airport on Sunday, May 19, 2019, to witness a piece of history. Nine World War II-era C-47 aircraft flew in to Presque Isle for a short layover before heading to France for a commemoration of the 75th anniversary of D-Day. (Paula Brewer | Star-Herald)

Assistant weeklies editor Paula Brewer captured first place in the picture story category with her great photos from a visit by C-47 aircraft in Presque Isle. The photos were used with this story “Huge crowd greets World War II-era planes en route to D-Day events.” The judges commented on the clarity of the photos, even on a cloudy day, and “great subject placement for captivating photos.”

Brewer placed second in opinion columnist for her column Walkabout:Aroostook on the topic of cursive writing, “Putting pen to paper? Who does that?”

“[This column is] thought provoking and entertaining. And I think cursive should make a comeback as well,” one judge said.

Reporter David Marino Jr., who joined the staff in late November 2019, placed third in analysis for his story on the role Facebook plays in The County with “Facebook groups unite rural Aroostook County, but also spread fear and rumors.” Judges thought it was an interesting commentary on our times and praised Marino for a good job.

He also placed third for business story with one of the first stories he wrote for Star-Herald “New manager, local businesses are reinvigorating the long struggling Aroostook Centre Mall.” Judges commented on how well written the story was, noting that Marino quoted multiple sources and calling it a high interest kind of story.

Reporter Melissa Lizotte placed third for food feature for her story on “French fry stand has decades-long tradition of serving fair customers” about a locally well-known and popular french fry stand. A judge enjoyed the embedded story of how the owners met.

Editorial cartoonist E.A. Williams placed second in that category for his cartoons showing animals having a cookout in the middle of the road because basketball tournament week in Bangor has emptied The County; one on astronaut Jessica Meir’s session with the Caribou students from the International Space Station; and one on people being generous to each other while shopping during shortages caused by the pandemic.

The judge’s comments summed it up: “Excellent art, upbeat, encouraging messages in a field in which it is easy to become cynical. This community is blessed to have an artist of this caliber contributing to their newspaper.”

The 500-millibar upper-level trough associated with the cold front and low pressure that brought last evening's thunderstorms will slowly move over the Valley today and Thursday with a chance for scattered showers and an isolated thunderstorm or two across the Valley this afternoon.
Our Sponsors END_OF_DOCUMENT_TOKEN_TO_BE_REPLACED