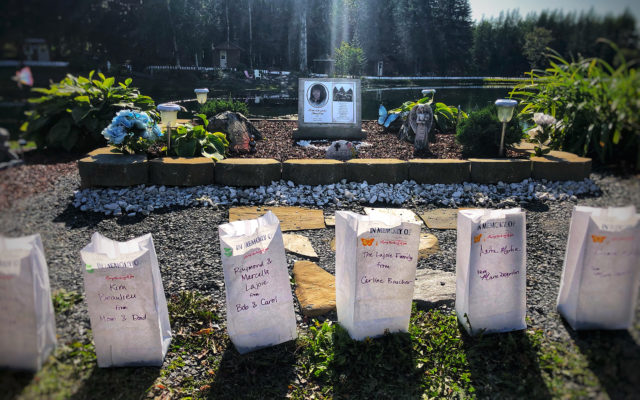 Mizpah brings healing to mourners at Walk Around the Pond

Morgan Mitchell • August 27, 2019
Luminarias lined the walkway of the pond on Aug. 25 to honor those who succumbed to life-threatening illnesses such as cancer and depression, during the annual Walk Around the Pond at Mizpah.

GRAND ISLE, Maine — Luminarias lined the walkway of the pond on Aug. 25 to honor those who succumbed to life-threatening illnesses such as cancer and depression, during the annual Walk Around the Pond at Mizpah.

The illuminated bags, filled with glow sticks, lined the path that visitors walked to enjoy the evening with family and friends at the (at least) 15th year. Each bag was sold for $5 with the proceeds used to put on the event or set aside for operational expenses for the Mizpah property.

Every bag contained the names of the person being honored and the ones who purchased the luminaria. During the annual candlelight walk to honor survivors and the deceased, at least 400 people attended.

“It’s a somber walk, and it’s a bittersweet thing because some people will walk in memory of their loved one who passed,” said one of the organizers, Mike Corbin.

Mike’s brother, the late Richard Corbin, founded Mizpah — which means “helping one another” in Hebrew — in 1991, dedicating the then-15-acre site to instilling the feeling of spiritual healing in visitors. Doctors diagnosed him with Hodgkin’s disease when he was 22 and gave him less than one year to live. But he survived through many treatments and surgeries to age 71.

According to the Mizpah website, Richard made a promise to God at one point that if he spared his life “for a little while longer I would build a place for cancer people to come to. A place for cancer survivors and people in grief to come and reflect, meditate, console and be at peace with each other and enjoy the beauty nature has to offer.”

Since then, Mizpah has become a place for all people, in all walks of life, suffering from any illness to come and find peace in the tranquility of the beautifully groomed grounds.

“We specify cancer, because that is what my brother originally started this for,” Mike said. “But as he went on, he realized that there’s not only cancer, there’s all kinds of other illnesses out there including suicides and depression.”

Angela Albert, mother of the late Karen Dufour, was surrounded by friends and family Sunday night, as she walked in her daughter’s memory. Karen was a victim of suicide.

Karen’s family has a special memorial for her near the water’s edge of the pond. Albert said they go out about once a week to the pond.

“It’s so soothing, it is so calming,” she said. “I even come here at night, and sit here and listen to the music, and it’s very relaxing and healing. It is part of our healing to come here.”

“It is important because we are here with other people who are going through the same grieving process we are,” she said. “We’re all together and we share.