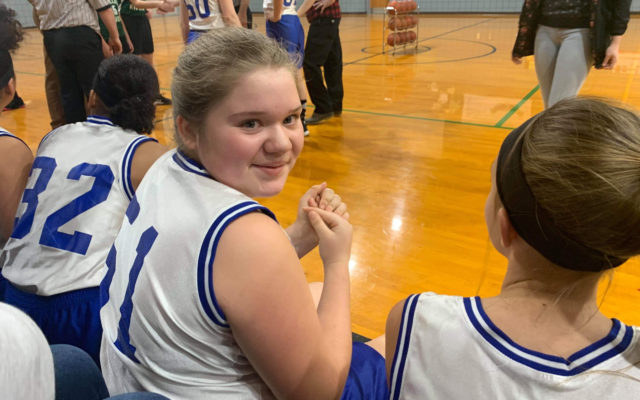 Basketball player with intellectual disabilities wows on and off the court

Morgan Mitchell • January 6, 2020
As fans screamed and cheered in the gymnasium at Madawaska Middle/High School on Dec. 7, Dezarae Ackley used all the training she had with her teachers and coach to block out the noise and shoot and score her first basket during a game.

MADAWASKA, Maine — As fans screamed and cheered in the gymnasium at Madawaska Middle/High School on Dec. 7, Dezarae Ackley used all the training she had with her teachers and coach to block out the noise and shoot and score her first basket during a game. 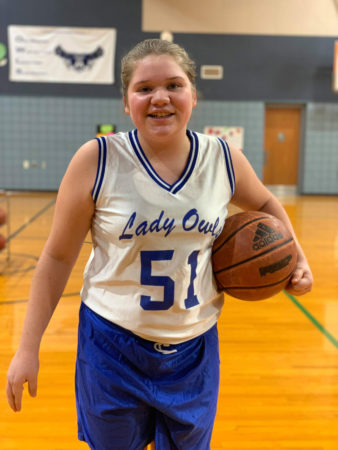 Coach Tom Gerard has taught Ackley, the only intellectually disabled player on the team, in his adaptive physical education class for the last two years.

In the classroom and on the basketball court, Ackley’s coaches and teachers reinforced the process of making baskets — catch, turn, shoot.

“We just developed her ability to shoot and she’s enjoyed it,” he said.

Over and over on the basketball court during the game, Ackley looked for the ball and would repeat the mantra out loud.

Ackley comes from a long line of athletes, according to her mother Erica Cyr.

“She’s good at basketball and she loves it,” Cyr said. “And she wants to be like her big sisters … it runs in the family.”

Ackley has an older sister on the high school varsity team who recently led the Madawaska girls to victory, and a sister in college who was also very athletic.

“Dezarae always goes to cheer them on, and that’s where she had seen it first,” Cyr said. “She wants to be just like them. She wants to be like her sisters and she wants to do ‘big girl things’ as she says.”

Ackley’s teacher, Vanessa Gagnon, said her student is a “ray of sunshine” for the entire classroom, and takes care of the other students in the class as if she were “mom No. 2.”

Gagnon said Ackley had the goal of being on the girls middle school basketball team, and Gerard invited her to be part of the season.

“Sports for her, and every other kid in this school, is just an extension of their education — it is not a standalone. It helps them learn different things and experience different things,” Gerard said. “I see no reason why someone in special education can’t experience the same things.”

Gerard said he previously had a student who played on his middle school team who was in special education and ended up on the high school varsity team.

“For me, this was about learning the life skill of setting a goal, breaking it down into smaller chunks and then working toward that goal,” Gagnon said. “So for her, we had to learn. Not only did she practice in the gym — which making the baskets was the easy part because she’s really good — but we also had to practice in the classroom. We had to practice what game day would look like.”

Gagnon said they would simulate the loudness of the gym on game days and how many and how close the fans would be to the players. Those tactics coupled with the life skills Gagnon said Ackley used allowed the young player to take a chance. 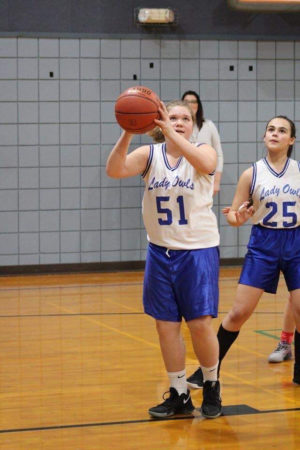 Gagnon said it took about a month of learning in the classroom and the gym, but that it was Ackley’s drive and ambition that allowed her to meet that goal and got her on the court.

“She was determined to be part of the team, and she did it,” Gagnon said.

Sports give students the opportunity to be part of something bigger, Gerard said.

“It gives kids a chance to belong, to participate, and to mainstream with other kids and be part of the school rather than just be isolated,” he said. “And Dez is a prime example of somebody that just got out there.”

Gerard said he spoke with the coach for the Fort Kent girls team about Ackley before the game on Dec. 7.

“It’s middle school sports. It’s about involvement and fun, and getting kids to like the game,” he said. “It’s not a varsity-level sport to where the prime motive is to win the game. So we made sure everybody knew [about Dezarae] and we got it done.”

Gerard said there are more students he wants to get involved in middle and high school sports.

“We try to make sure that everybody gets to participate, not just the athletes but everybody,” he said.

In addition to learning about goals, Gagnon said Ackley modeled for the other students as well as the teachers and coaches that “sometimes in life we have to do things that are scary to us, that really push us out of our comfort zone.”

“I was brave,” Ackley said.

It didn’t end there. At the final middle school game of this season, the young player came out as the top scorer in which she made three baskets totaling six points. She plans to return to the court early next season to continue catching, turning and shooting.

A weak disturbance will drop down from the northwest tonight triggering some snow showers across Fort Kent and vicinity as it moves through with no significant accumulation expected.
Our Sponsors END_OF_DOCUMENT_TOKEN_TO_BE_REPLACED