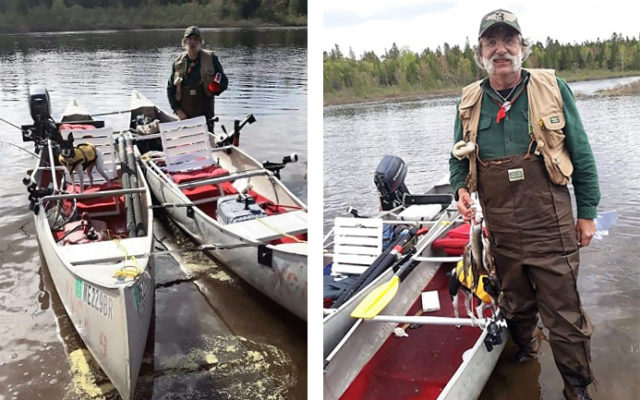 Brothers Michael Fiori, 67, of Brunswick and Larry Fiori, 70, of Kennebunk were fishing in two 17-foot Grumman canoes tied in tandem on Umsaskis Lake when at around 7 p.m. Monday the canoes suddenly filled with water and flipped over, sending the men into the cold water underneath the canoes.

Larry Fiori’s dog Cooper, a rat terrier, was also fishing with the men and went under water when the canoes flipped over.

The men were on day two of a weeklong fishing trip along the Allagash chain of lakes when the incident occurred.

Michael Fiori, who is the founder of the Downeast Pharmacy chain, said Tuesday he believes there was a sudden separation at a bottom seam in the metal of the 1970’s canoes, allowing one canoe to immediately swamp.

“There was no time to do anything. The water immediately flooded and both canoes were on top of us,” Michael Fiori said.

The men were not wearing life jackets when the canoes flipped, but Michael Fiori said they were able to locate the life jackets and put them on after entering the water.

Cooper was wearing a bright yellow dog life vest with a sweater beneath it throughout the fishing trip.

Once the men freed themselves from underneath the canoes, they began swimming for shore but soon became separated.

“I could see dim smoke rising about three to four miles away on a very remote shore of the lake so I headed in that direction,” Michael Fiori said. “I had a whistle around my neck that I always keep on for safety and when I was about a third of the way there, I started yelling for help and whistling constantly. I kept looking for my brother, but I couldn’t see him behind me. I thought maybe I’d lost him.”

Michael Fiori was headed toward the shore of a remote area known as “Sandy Beach,” where Scouts Crew 345 Kingston, New Hampshire, led by Harry Taylor, happened to be camping.

Michael Fioro reached shore at about 8:30 p.m. and the Scouts brought him to their fire where they heated stones and wrapped them in towels to warm him.

“I was shaking pretty bad,” he said. “I told them my brother was in the lake somewhere.”

Members of the Scout crew headed for a ranger station where they notified Ranger Steve Day of the situation. In the meantime, other Scouts headed out on the lake in a canoe in search of Larry Fiori.

“They found him hanging onto a gas can about 250 feet offshore down farther than I was,” Michael Fiori said. “He had floated and paddled some. He was in bad shape.”

Larry Fiori clung to the side of the Scouts canoe until Ranger Day and his crew found them on the lake and were able to lift him into the ranger boat and transport him to the ranger station shortly after 10 p.m.

After spending approximately 3 hours and 15 minutes in the cold water of Umsaskis Lake, Larry Fiori eventually was transported by ambulance to AR Gould Northern Light Hospital in Presque Isle where he remained as of Tuesday evening for treatment of hypothermia.

“He’s doing fine. … He wants to go fishing but they’re not letting him out,” joked Michael Fiori while visiting his brother at the hospital.

Michael Fiori said he is certain the men are alive today due to the combined efforts of the Scouts and Ranger Day.

“Neither one of us would have made it without the help of the Scouts; there is no question in my mind,” Michael Fiori said on Tuesday. “There was no way I could have made it down to the ranger station; it would have been an impossibility. And even if I had, my brother was too close to not surviving. We wouldn’t be alive if it wasn’t for them.”

The third Fiori fishing on Monday also came away with a happy ending.

“Cooper was all my brother could think about when they were taking him away in the ambulance,” Michael Fiori said.

A Forest Ranger located Cooper in a remote area on the shore of Umsaskis early Tuesday morning after spotting his bright yellow life vest.