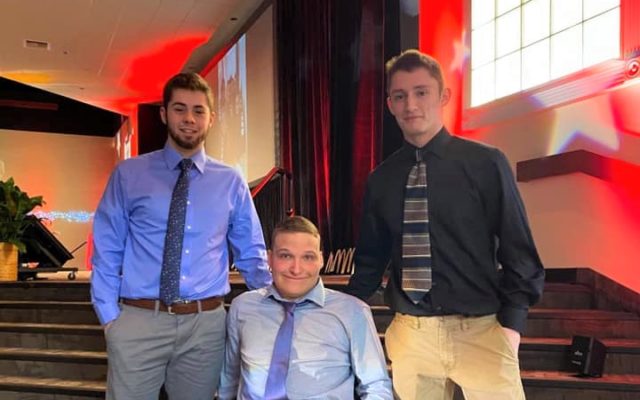 Fort Kent student recognized for his ‘Spirit of the Game’

Sirois, 17, has been manager of the Fort Kent Community High School Warrior boy’s basketball team for the past four years.

“I became involved with the basketball team because I wanted to be able to be a part of a team. Even though I am unable to play — I love basketball,” Sirois said.

Sirois travels in a wheelchair due to spina bifida, but he is all about sports.

Sirois was awarded the Joshua Titus Spirit of the Game Award at the 40th annual Maine McDonald’s All Star Basketball Banquet in Bangor on March 6.

The award is given to those who “embody the spirit of the sport, exemplify sportsmanship, show an ability to overcome obstacles and boundaries and support and inspire their teammates and coaching staff,” according to the McDonald’s website description of the award.

“Ever since I was a little kid, I have been involved with sports in some way, shape or form,” Sirois said. “Whether it was watching games on TV with my parents or going to school sporting events now, sports has [had] and always will have a special place in my life.”

He has also made a significant contribution to the Warriors over the past four years.

Sirois’ former high school basketball coach of three years, Derrick Cooper, said he could not think of a better recipient of the Spirit of the Game Award than Sirois.

“Aidan embodies what the Spirit of the Game entails. He never missed any practices for the three years I coached him and was always striving to be a positive motivator for his teammates. Aidan also demonstrated stellar sportsmanship with his teammates and competitors,” Cooper said.

Chad Cyr, who coached the Warriors this past year, also shared his appreciation for Sirois’ contributions to the team.

“He was our statistician and was every part of the team as any other player,” Cyr said. “Aidan is the epitome of the spirit of the game. He was the uplifting spirit when we needed one, and he was there to light a fire when needed as well.”

Sirois plans to pursue his love of sports when he graduates from high school in June.

“I have already been accepted and am committed to going to Husson for sports journalism and marketing next fall. I want to become a sports journalist because my love for sports is something I believe will never go away,” he said.

Sirois already has a head start, having called many soccer games on broadcasts by WFKTV Channel 4.

Teammate Eden Paradis said that Sirois encouraged the Warriors and will do well in his sportscaster endeavor.

“Aidan is someone who will always be there to cheer you up and keep you updated on the stats. He knows the ins and outs of most sports, and his presence is always known. He is a true warrior and leader,” Paradis said.

When not focused on his studies or responsibilities as manager of the high school basketball team, Sirois works as a cashier at Paradis Shop ‘n Save.

His parents are Benjamin and Jennifer Sirois of Fort Kent.

A weak disturbance will drop down from the northwest tonight triggering some snow showers across Fort Kent and vicinity as it moves through with no significant accumulation expected.
Our Sponsors END_OF_DOCUMENT_TOKEN_TO_BE_REPLACED