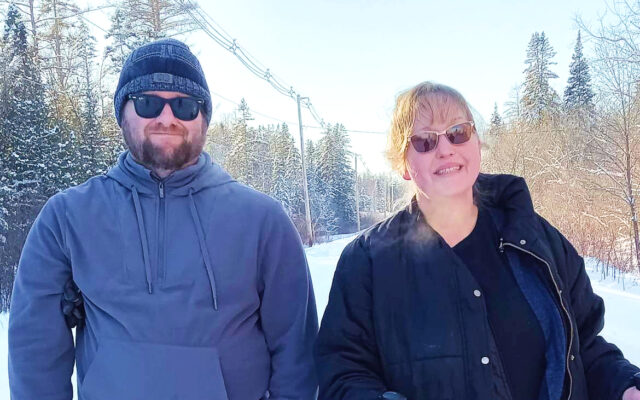 Even the little hills are worth climbing

Jessica Potila, SJVT / FhF Staff Writer • January 16, 2023
A friend I haven’t seen in person for more than 30 years and I were talking about what it feels like to be an age we once considered old.

FORT KENT, Maine — A friend I haven’t seen in person for more than 30 years and I were talking about what it feels like to be an age we once considered old.

I turned 50 in September and Greg is about 10 months younger, which means he has the enviable status of claiming the number “4” at the beginning of his age for a bit longer.

We both have health issues we never saw coming when he was playing tight end on our high school football team or I was climbing apple trees with my cousins in northern Michigan where we grew up. We don’t think of ourselves as old from the inside looking out, but does anyone?

His grandfather had a mini bar in his van where he would mix scotch and water between sales calls, like a mobile “Mad Men” office set.  Both Greg and I agree that is pretty old-fashioned.

But then once when my phone died during a conversation we tried to switch over to Facebook messenger audio. We struggled to hear one another clearly and he asked me “Is there a way to put this thing on speakerphone?” I didn’t know, either.

It reminded me of my mother trying to turn down the volume of my boom box back in the 1980s and her flustered fingers pressing and twisting every possible button and dial on the machine before she managed to find the right one.

Negative health changes are all too scary reminders that nobody is as timeless or immortal physically as our minds and souls may feel. In my case, I was recently unexpectedly diagnosed with a heart condition. That immediately scared me into making more positive health decisions.

Scotch and water was never my thing but I have not had a beer since and pay much closer attention to what I eat. One advantage is that I saved money the day after Halloween this year, not shopping for 75-percent-off chocolate.

I joined a local gym, and within a few weeks of highly modified Cross Fit workout routines I feel increasingly more confident that my body is capable of more than sitting at a computer desk.

So, when a coworker who was born the year after I graduated from high school, journalist Paul Bagnall of The Star-Herald, invited me to go snowshoeing this weekend, I accepted.

Paul is from Massachusetts and only moved to Aroostook County a few months ago. He is eager to explore Maine and see what winter activities the state has to offer.

He was disappointed not to have seen a moose while making the one-hour drive from Presque Isle to Fort Kent where I live, but I assured him this was a good thing.

Since neither of us purchased the near billion-dollar winning Mega Millions ticket sold in Bath on Friday, we opted for $3 rentals at the Fort Kent ice rink. I rented ski poles for my first ever snowshoeing expedition and headed out on the Heritage Trail near Lonesome Pine Trails.

At times we stepped off the trail for snowmobiles to pass, and I learned that Paul not only trained in martial arts for 12 years, but enjoys everything outdoors and is quite adventurous.

He experienced scuba diving in Tobago while conducting coral reef research. He has gone ice climbing and bouldering, which is rock climbing without ropes or harnesses. He snowshoed at Skinner State Park in Massachusetts, where he and his companions entered a cave and witnessed a colony of sleeping bats.

I have had no such grand outdoor experiences, but used to explore the woods of a small mining town in Michigan with my cousin. We were careful not to go into the caving ground areas but still had plenty of adventures. One time we found a 1927 quarter worth $100 deep in those woods. I bought my first 10-speed bicycle with that money.

When Paul wanted to snowshoe up a small hill off the Heritage Trail, I wasn’t sure my body could handle such a climb. After a few minutes standing in the snow I decided to give myself a chance.

Climbing the small hill was easier than I thought it would be.

I was so emboldened by the experience that after the snowshoe expedition we made plans to climb an indoor rock wall at University of Maine at Presque Isle.

Paul said he did not mind the slow pace at which we snowshoed or the comparatively short distance, because while we were moving slowly he had a chance to take in the beautiful scenery.

He did say he was eying a jump at the ski hill while we were leaving and would like to give skiing there a try one of these days.

At 31, Paul still has plenty of dreams for his life. He wants to travel to Sweden, Japan, and Vitoria, Brazil, and I am sure he will take the time to enjoy the scenery of those places.

So if you are faced with a hill to climb, take it from me: they’re not always as intimidating as they seem.

A weak area of low pressure will move across the Gulf and to the east today.
Crown Politics END_OF_DOCUMENT_TOKEN_TO_BE_REPLACED

Maine’s longest serving legislator, Martin was first elected to the Maine House of Representatives in 1964 when he was 23.
Our Sponsors END_OF_DOCUMENT_TOKEN_TO_BE_REPLACED