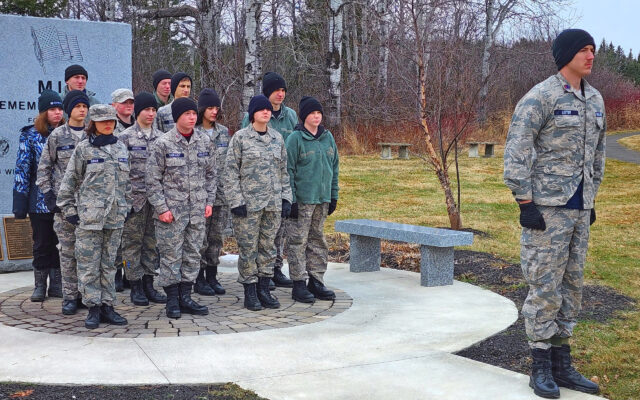 PRESQUE ISLE, Maine — More kids are learning to be leaders in a hangar that once bustled with World War II planes in Presque Isle.

The County Composite Squadron Civil Air Patrol, Maine’s northernmost branch of the auxiliary to the U.S. Air Force, has quadrupled its membership in the last six years.

From its start in 1941 to aid the War Department, Civil Air Patrol has evolved beyond an Air Force feeder program. There is a military component, but opportunities for public service and leadership make it more attractive to youth. Numbers have grown statewide, Aroostook officials said.

Maine’s 10 Civil Air Patrol squadrons have participated in searches in Baxter State Park, delivered PPE and vaccines all around Maine during the pandemic and hosted a National Flight Academy for cadets in Old Town.

“I really feel like this is a great program to kind of be real about what’s coming up [in life],” said 1st Lt. Christine Lister of Caribou, who leads administration and personnel for the squadron.

Elements of Civil Air Patrol — learning respect, taking direction and getting along with various people — are found in the business and academic worlds, Lister said. Many children don’t get a chance to experience that before becoming adults.

Headquartered in Augusta, the Maine Wing Civil Air Patrol oversees more than 330 members statewide. The patrol has aircraft and crews in Augusta, Bangor, Sanford, Lewiston/Auburn and Portland. Other units are in Brunswick, Waterville, Bar Harbor and Machias.

Membership is rising all over the state, said Sgt. Jason Lister of Caribou, deputy commander of cadets for the Aroostook branch. In 2021, there were 149 cadets in Maine, a 20 percent growth from 125 in 2012, according to the Maine Wing.

But numbers have exploded in Aroostook, up 400 percent in six years from five cadets in 2016 to 19 this year.

Mierzwa joined as a senior member when her daughter A.J. became a cadet. 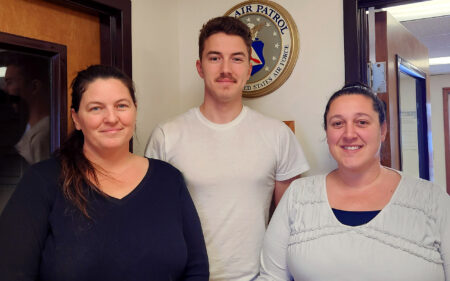 For the Listers, it’s a family pursuit. Several of their children are involved as cadets and two sons have become senior members. Son Seth, 18, is a youth leader.

The experience introduces kids to careers in the military, aerospace or emergency response, and they learn to interact with people of all ages, Christine Lister said. Cadets are grouped by rank, not age, so older members might work with officers who are younger than they are.

For Seth Lister, being able to inspire younger peers was a revelation.

“I think the greatest lesson I have learned in Civil Air Patrol is being able to lead and teach other people,” he said. “And that’s a very valuable lesson to have in life.”

Seth has been in CAP for six years. This year, while at a Virginia encampment — an annual event that draws units from several states together — he helped instruct younger cadets. He hadn’t thought of himself as a leader before, he said.

His experiences have also made family interactions more meaningful.

“Being here has given me so much practice to be a better bigger brother,” he said.

Jason Lister joined Civil Air Patrol in 2016 in Virginia and transferred to the County Composite Squadron when the family moved to Caribou in 2018. The group had five youth members when the Listers joined. Now, there are 19 cadets and multiple adults from around The County.

Christine Lister and Kelly Mierzwa attributed the explosion in interest to the unit’s increased visibility. As members have participated in more parades and community events, the public has noticed and more want to join in.

The group has a color guard and also assists at events like the Loring Air Force Base open house. They join the national Wreaths Across America effort, laying wreaths on veterans’ graves at local cemeteries.

But what he finds most rewarding is seeing a cadet pass on leadership lessons to other young people.

“As a combat veteran working with soldiers and service members, I have seen kids in the Civil Air Patrol program act in a manner more professional than service members that I deployed with, which gives me faith that our youth are not a lost cause,” he said.

Maine’s longest serving legislator, Martin was first elected to the Maine House of Representatives in 1964 when he was 23.
Our Sponsors END_OF_DOCUMENT_TOKEN_TO_BE_REPLACED