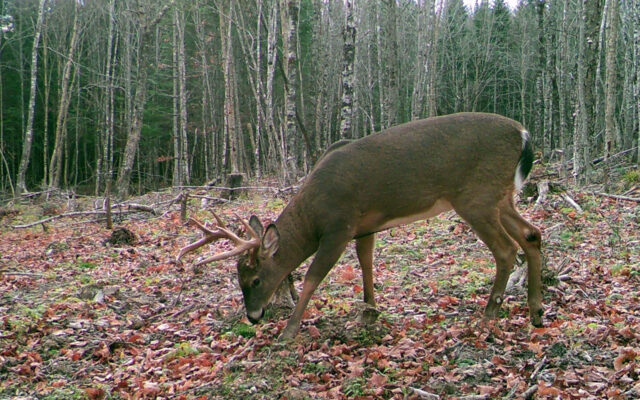 Bill Graves, Special to the Fiddlehead Focus • November 25, 2022
The last three days of November and the first three of December combine to form this year’s week of muzzleloader season for whitetail deer in Aroostook County.

The last three days of November and the first three of December combine to form this year’s week of muzzleloader season for whitetail deer in Aroostook County. Over a dozen southern zones also get the following week to tag a deer, and many local sports travel to take advantage of that few extra days.

Although the number of muzzleloader enthusiasts increases each year, there are a lot fewer hunters in the woods during black powder hunt than during the regular season, a real advantage. There’s also the likely benefit of fresh tracking snow at some point during the short season.

If you’re not a muzzleloader hunter yet, you’re not only missing out on an extra hunting opportunity, but a challenging style of shooting game and paper targets with a unique rifle or handgun. A lot of shooters may not even be fully aware of the major changes over the last few decades on firearms that need to be powder charged and bullet loaded into the muzzle. There’s still a cadre of traditionalists, however, who favor the centuries-old, long, musket-style black powder weapons such as the matchlock, flintlock and wheelock rifles named for their method of powder charge ignition. 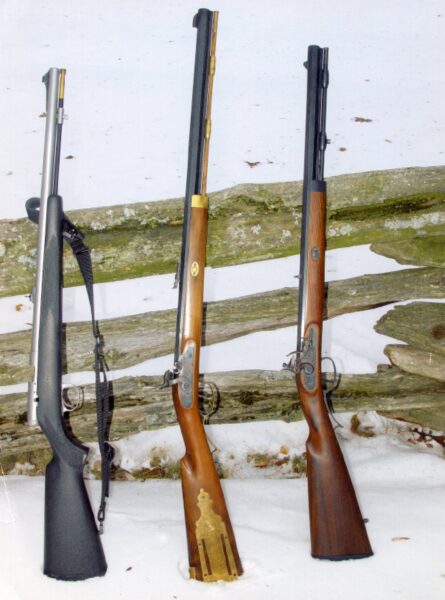 There are several muzzleloader options for hunter to select. From newer in-line rifles to old-model flintlocks, they all allow sportsmen a few extra days to fill a deer tag. (Courtesy of Bill Graves)

Although the newer “in-line” rifles resemble modern cartridge-firing long guns, they are essentially still muzzle loaders, but with a lot of modern features. Referring to them as black powder guns is a bit questionable, however, since Pyrodex has mostly replaced the dirty, smoky and somewhat unstable black powder as a propellant. In fact, there are now formed and measured hard discs of Pyrodex in various grain weights that easily drop down the rifle barrel. Each hunter can select the best combination of Pyrodex pellets to acquire the best muzzle velocity and knock-down energy for their favorite bullet.

On the subject of projectiles for muzzleloaders, various size and weights of musket balls are still available for different calibers of rifle. Most hunters are passing up the ball and patch loads pushed home into the breech over loose powder with a ramrod for plastic encased Sabots and the Pyrodex discs. Available in multiple weights, shapes and metal composition, Sabot projectiles seat easier and firmer, leading to flatter trajectories, greater distance and much improved accuracy.

Being able to use a 209 primer for ignition has been a huge boon. It serves as a safety, since when it’s not in place there’s no source of fire to ignite the powder. Unlike previous ignition devices, a sealed primer is impervious to rain, snow, water immersion and other inclement weather that often caused misfires in earlier models. Of course, the advances in fiber optic sights on in-line rifles offer better accuracy, especially in dim light conditions, and many hunters opt for a top-rate, multi-power scope.

The projectiles for muzzle-loading rifles have improved over the years. Shown from left to right are modern cartridge to older lead ball. (Courtesy of Bill Graves)

There are several top-notch manufacturers of in-line rifles. Knight, CVA, White and Remington offer excellent options, and my proven favorite, Thompson-Center (TC). I should mention that Smith and Wesson bought out TC last year and within months closed down production, so haste is of the essence if you want to purchase a TC muzzleloader before there are no more.

I’d be remiss not to mention Traditions, an in-line muzzleloader company that has introduced what might just be the most innovative loading technology ever for this type of rifle. The Nitrofire rifle was voted American Hunter muzzleloader of the year. Federal created an encapsulated propellant charge that looks like a .410 shotshell. It’s called Firestick, and loads from the breech just like a break-open shotgun. A 209 primer is inserted into the base of the Firestick after a projectile is seated through the muzzle. It’s a high-tech cousin of the original in-line, but with lots of bells and whistles assuring accuracy, safety and dependability.

If a few extra days of deer hunting and phenomenal upgrades in the rifles aren’t enough to get you into shooting a muzzleloader, it’s also a great option for moose and bear. I enjoy it so much I even bought a muzzleloading shotgun for upland birds, ducks and geese. I’m going to try for a wild turkey next. Check it out — there’s still time this season.

A weak area of low pressure will move across the Gulf and to the east today.
Crown Politics END_OF_DOCUMENT_TOKEN_TO_BE_REPLACED

Maine’s longest serving legislator, Martin was first elected to the Maine House of Representatives in 1964 when he was 23.
Our Sponsors END_OF_DOCUMENT_TOKEN_TO_BE_REPLACED