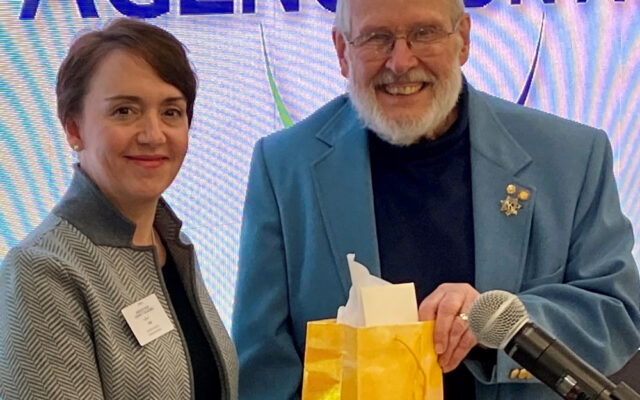 Contributed • November 4, 2022
The 48th annual meeting of the Aroostook Agency on Aging was held Oct. 7 at Northern Maine Community College in Presque Isle.

Participants also joined the meeting remotely from Nadeau Hall at the University of Maine at Fort Kent and the Houlton Higher Education Center.

Rev. Kenneth Phelps, president of the board, opened the meeting.

A moment of silence honored the service of two directors who died during the past year: Martin Bernstein of Fort Kent, who served a short but enthusiastic term, and James Tweedie Sr. of Robinson, a 22-year member who was serving as vice president of the board when he died last month.

The agency also recognized outgoing director Raymond “Butch” Thibodeau of Sinclair and Dean Rauch of Caribou for his service on the board of the Caribou Gardens, a 20-unit apartment complex, many years as president.

“I’m proud to be part of this non-profit organization that employs 100 people, engages 140 volunteers, partners with a multitude of organizations both in the county and throughout the state, provides more than 20 programs and services, assists more than 5,000 individuals across northern Maine, all while maintaining a positive bottom line, despite rising costs,” said Phelps.

“We have continued to help our community through the ups and downs of COVID. Requests for many services are at high levels, especially core services such as information and assistance, home delivered meals, and personal care,” Barresi Saucier said.

The outreach team provided about 17,000 units of service; nutrition teams delivered an average of 9,200 meals each month; and the Eldercare team gave more than 66,000 hours of in-home personal support, she said.

Dining centers have reopened in the northern region, and central and southern sites are scheduled to reopen in late fall. Agency staff are now providing case management services to several insurance companies through a partnership with Healthy Living for Maine.

The Friendly Volunteers program has contributed more than 250 hours of service monthly and has received national attention as one of only 26 Community Care Corps sites. The Online Gathering Place, a weekly virtual gathering for people wanting to connect, to share, and learn, was featured by USAging, the national association of agencies on aging.

Recently, the agency was awarded a significant grant by the Federal Administration for Community Living to support the development of a community-based memory care center, scheduled to open in the spring of 2023. The memory center will serve as a hub of information resources, and care for those experiencing memory loss, as well as family, friends, and neighbors who support them.

Last year, the Agency set up a 501c3 foundation to accept gifts and bequests because current funding does not meet current needs, Barresi Saucier said.

Next year will feature a yearlong celebration to commemorate the agency’s 50th birthday, she said.

Phelps and Barresi Saucier presented service awards to 15 employees, recognizing more than 106 years of combined service to older adults and caregivers in Northern Maine. They include, for 35 years of service, Tamara Cote; 20 years, Belinda Hoffses; and Judy Anderson and Donna Sullivan, both serving 10 years. 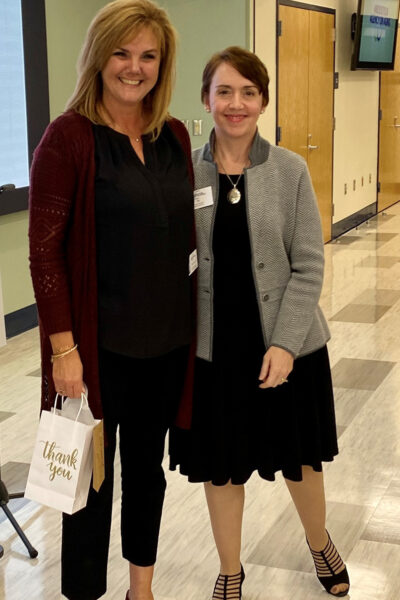 Steve Pelletier, president of Pelletier Ford in Fort Kent, received the 2022 Friend of Aroostook Agency of Aging Award via the UMFK link for his leadership in a regionwide fundraising campaign for a nutrition services delivery van.

Elected as directors for a two-year term were Andrew Birden of Fort Kent, Stephen Poitras of Fort Fairfield, Walter Elliott Jr. of Limestone, Robert Meinders of Benedicta and Patricia McCain of Houlton.

Westfield artist and writer John Holub spoke to the group about serving beyond mediocre, doing what you love. He praised the efforts of the agency directors, employees, and volunteers who provide services to older adults, giving 110 percent.

“It’s important to show up, give more than is expected, and inspire others. Help someone display their talents and encourage them to share with others. There is no bad art. Beauty is in the eye of the beholder, and art cannot be appreciated if it is hidden away. It’s time to show what you love to do,” Holub said.

Holub chose to develop his passion for art over business management, often working for free. He created illustrations and wrote articles for the Maine Times, the Rolling Log and the Maine Sportsman. A self-taught artist, Holub started with simple pen-and-ink house renderings, moved to watercolor paintings, and now enjoys painting with oils.

Rev. Phelps thanked volunteers for their commitment to service.

Heavy snow is expected to overspread the Valley this afternoon and continue into the evening hours.
Crown Politics END_OF_DOCUMENT_TOKEN_TO_BE_REPLACED

Maine’s longest serving legislator, Martin was first elected to the Maine House of Representatives in 1964 when he was 23.
Our Sponsors END_OF_DOCUMENT_TOKEN_TO_BE_REPLACED