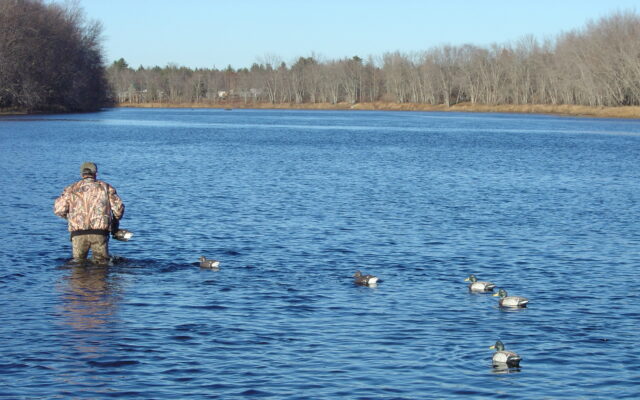 How to make the most of duck hunting season

Paula Brewer, Assistant Editor • October 20, 2022
Duck hunting season for our northern zone runs through Dec. 3. It’s been a great nesting year and puddle ducks of every species are prominent on every size waterway from mud puddles and creeks to huge lakes and rivers.

Duck hunting season for our northern zone runs through Dec. 3. It’s been a great nesting year and puddle ducks of every species are prominent on every size waterway from mud puddles and creeks to huge lakes and rivers.

As weather cools and frost becomes a regular morning event, the smaller, less hearty ducks such as teal, wood ducks, widgeon and gadwall will wing further south. For the most birds and widest variety, October yields the best shooting opportunities.

The most common method of hunting ducks, locally and nationwide, is setting out a fake flock of floating decoys on a local waterway where large number of birds visit to rest and feed. It’s best to avoid hunting roost ponds where ducks spend each night, but fortunately, Aroostook abounds with other waterway options. Hundreds of recognized lakes, ponds, rivers and streams polka dot the Crown of Maine, and even more swamps, swales, potholes, farm ponds and marshes offer duck gunning options within 15 minutes of almost every hunter.

A number of duck hunters prefer to set up a decoy spread and lay out blinds in cut grain or potato fields near a waterway where the waterfowl regularly roost or rest. When the birds fly out to feed, they may spot the decoys and opt to join or at least fly over to check things out.

For waterfowlers who don’t own a retrieving dog or don’t want to expend the time and effort of transporting a boat, field gunning is a simpler option.

Scouting allows hunters to pinpoint specific sections of regional rivers and brooks where ducks regularly visit to rest and float about, dabbling in shallow water runs. Brush-shrouded potholes, reed-edged farm ponds and shallow marshes are other favorite R&R locations for ducks during late mornings and afternoons.

One to three hunters in full camo clothing can park a good distance from the waterway, then carefully and slowly sneak within shooting distance, using any and all available cover. Often the last few yards are a crawl, then everyone pops up and hopefully gets a couple of shots each as the ducks flush. At least a third of the time, the wary and alert ducks take wing before hunters get within range — that’s why it’s called hunting and not just shooting. 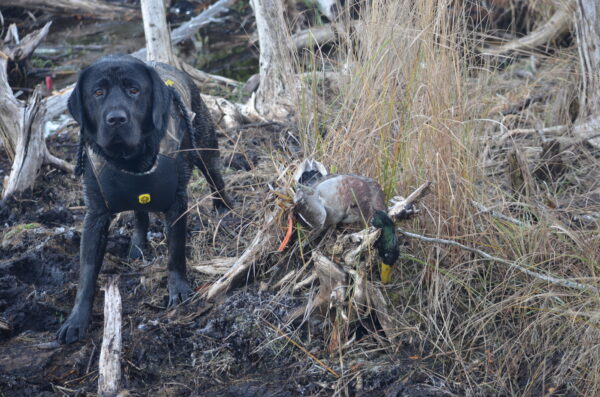 A well trained retriever saves a hunter a lot of work paddling after downed birds, and wounded ducks are seldom lost. (Courtesy of Bill Graves)

I’ve saved my personal favorite method of hunting puddle ducks for last: sneak and peek, floating a canoe along a stream to glide within shotgun range, is the most interactive way to shoot waterfowl, in my opinion. It’s a two-man endeavor; the shooter sits in the bow of a stable canoe with shotgun ready, while the stern man quietly paddles the boat, hugging the shoreline to drift close to dabbling ducks. Bogans, backwaters and calm eddies on corners are very attractive to puddle ducks during the day.

The two hunters switch places after a bird is downed or after the shooter misses on three chances. There are often a lot of ducks flushed, but many opportunities are challenging from a moving boat. I use a 19-foot Grumman square-stern aluminum canoe. It provides a very stable shooting platform, has a shallow draft and is lightweight for easy maneuvering. Fall water levels can be low, so a boat needs to float quietly rather than be dragged over shallow runs.

The Aroostook River, Prestile Stream and Meduxnekeag River offer miles of great float hunting and a wide variety of duck species. It’s also very lucky that a few flocks of geese will be encountered, and frequently, partridge can be shot from trees along the waterway or on the shoreline. Abundant field roads along all these streams allow easy launch and take-out of canoes and Jon boats, so sportsmen can plan to float hunt for an hour or all morning.

Don’t forget that a federal and state duck stamp will be needed. Steel or nontoxic shot shells are required by law, and even if most of the water is shallow, wear a personal flotation device.

It’s hard to swing a paddle without hitting a duck on most Aroostook waterways right now. But use a shotgun for better range and get out there now before the migration south begins.

Heavy snow is expected to overspread the Valley this afternoon and continue into the evening hours.
Crown Politics END_OF_DOCUMENT_TOKEN_TO_BE_REPLACED

Maine’s longest serving legislator, Martin was first elected to the Maine House of Representatives in 1964 when he was 23.
Our Sponsors END_OF_DOCUMENT_TOKEN_TO_BE_REPLACED