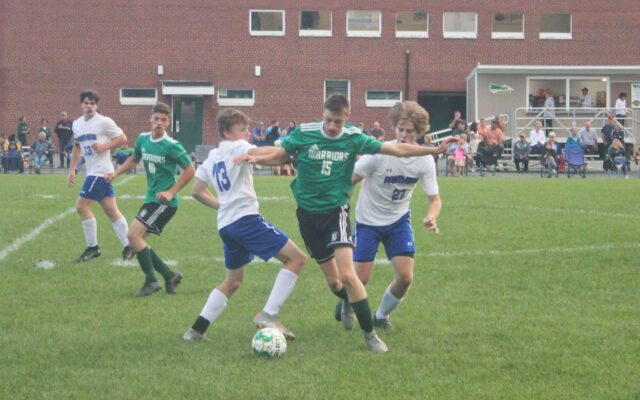 Joseph Cyr • September 6, 2022
The first week of soccer was a busy one for southern Aroostook County high school squads with a bundle of games played.

AROOSTOOK, COUNTY,  Maine — The first week of soccer was a busy one for southern Aroostook County high school squads with a bundle of games played.

The following is a recap of games reported to the newspaper.

Fort Kent 7, Hodgdon 0 – At Fort Kent Friday, the visiting Hawks kept the game scoreless for the first 20 minutes, but then Fort Kent opened the scoring floodgates for the lopsided victory.

Ben Burnham scored a goal and had an assist for MSSM.  Owen Dulac added the other goal.  Liam Hollis added an assist.

George Stevens Academy 2, Houlton 1 – At Houlton Saturday, the visiting Eagles defeated Houlton in a tight contest. Houlton led 1-0 at the break, but GSA got on the board via a penalty kick goal and added the game-winning goal later in the second half.

Emma McCarthy had the shutout in net for the Shires.

MSSM 3, Katahdin 2 – At Stacyville Friday, the visiting Penguins picked up the victory over Katahdin thanks to two goals and two assists from Aubrey Ainsworth. Lijia Yang scored the team’s other goal, while Rianna Mattox had an assist.

For Katahdin, Hunter Hartsgrove and Emily McNally each had a goal.

MSSM coach Lucas Hafford said the Penguins were playing down two players for much of the game, and occasionally short a third player, but still managed to come away with the victory. The two teams battled through a scoreless first half before the goals started coming for both clubs.

With the game knotted at 2-2, Mattox pushed the ball to Ainsworth for the eventual game winner with 3:43 remaining.

MSSM keeper Elena Wirth had seven saves on nine shots, while Emma Schmidt eight saves on 11 shots for the Cougars.

Lovley added two  assists, while Voisine, Julia Cyr, Philbrook and Martin each had one.

Larissa Daigle made one save on one shot, while Madison Smith had 14 saves on 22 shots for the Hawks.

A cold front moves through today with scattered showers that will taper off this evening as high pressure builds into the region with partly cloudy skies.
Crown Politics END_OF_DOCUMENT_TOKEN_TO_BE_REPLACED

All five candidates running for two seats on the Fort Kent Town Council gathered at a live question and answer forum.
Our Sponsors END_OF_DOCUMENT_TOKEN_TO_BE_REPLACED