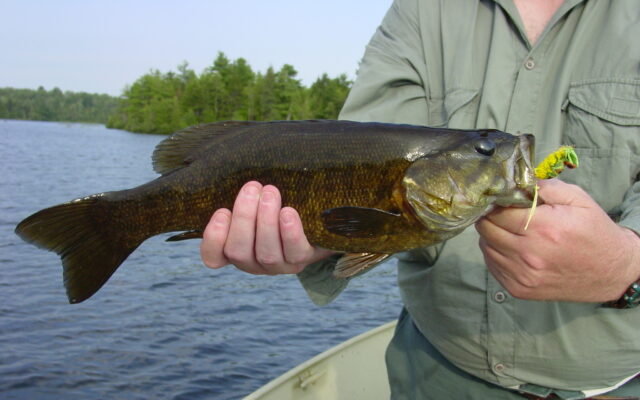 I’m not a real fan of deep dredging lakes with downriggers or lead core line, nor casting a sinking fly line and streamer or nymph on shallow ponds or stream deep holes. Instead I switch equipment and go after smallmouth bass, which get even more active in warm weather unlike our favored regional cold-water species.

Referred to as “bronzebacks” due to their sparkling gold/rust dorsal coloration, these fish aggressively attack surface plugs and then fight as if twice their actual size. Smallies explode on noisy, splashing top water baits, then become acrobatic and aerobatic trying and often succeeding to dislodge the hooks. It’s not at all uncommon to land a dozen or more bass, and hook and lose just as many during a three- or four-hour outing,

Most Crown of Maine fishermen already own the gear necessary for bass casting. It just needs to be repurposed and a few topwater plugs and perhaps some plastic soft baits purchased. A 6- to 7-foot spinning or spin-cast outfit of medium weight and light to medium action will work fine. Some folks prefer braided or fluorocarbon line but I like 6- to 8-pound monofilament on my spinning reels.

I do recommend a 12-inch piece of 12-pound test fluorocarbon as a shock leader between line and lure. Where there are bass you will also encounter large pickerel with very sharp teeth. I don’t mind losing a plastic worm, but most top-rate plugs cost around 10 bucks and I’m more than a bit peeved when a big bass or feisty pickerel cuts my line and steals my bait. 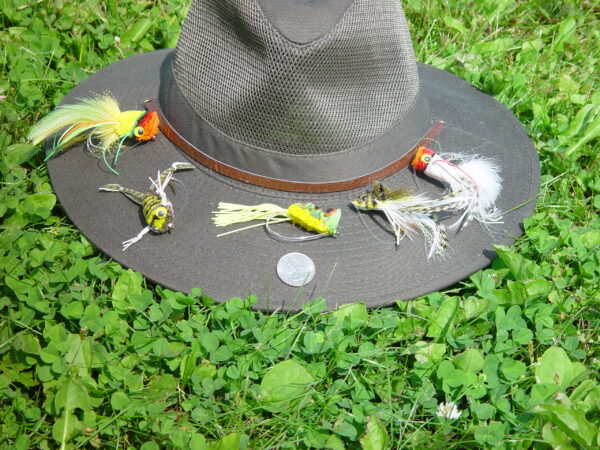 Fly fishermen will enjoy great topwater action when casting plastic poppers or hair and fur trimmed bugs like these during August when the smallmouth bass are hitting surface baits. (Courtesy of Bill Graves)

A few bass casters use a snap swivel so they can change plugs quickly and easily, but I tie a “trilene knot” directly to the hard bait eye. It gives a more natural motion with rod tip action in my opinion. A size 7, floating Rapala in a wide variety of colors is a popular spring trolling and summer casting lure for local fishermen. I used a bright orange one on my very first outing for bass and caught several. Over the years and many excursions on area lakes and rivers, I’ve found that noisy, splashing top water plugs produce better August action, although the shallow diving Rapalas still work in a pinch.  Also, bright colors like green, yellow, blue and orange are great attractants; maybe they look and act like a struggling rodent; amphibian or insect, or perhaps they just irritate the bronzebacks into striking.

Proven top water plugs for gurgle, splash and pop include the Heddon torpedo or spook, Rebel Pop-Rs, Arbogast Jitterbugs and Hula Poppers and Rapala skitter Pops. There are a vast array of colors and choice of a solid body or jointed for additional motion, and some models feature one or two miniature propellers to create greater water disturbance. Several companies offer surface baits in very realistic imitations of frogs, salamanders, crayfish, baby ducks and birds and large insects, all excellent food sources for big bass.

As a devoted fly fisherman, I highly recommend using a 5-weight rod and reel combo with a weight-forward floating line to cast plastic or feather and fur surface poppers for smallies this month.  With only a single hook and attached weed guard it can be a bit tough hooking and landing smallmouth, but oh is the explosive strike and surface-dancing fight on a fly rod worth the effort. Even the ones that don’t hook up or have the hook pull out mid-fight offer some exciting action. 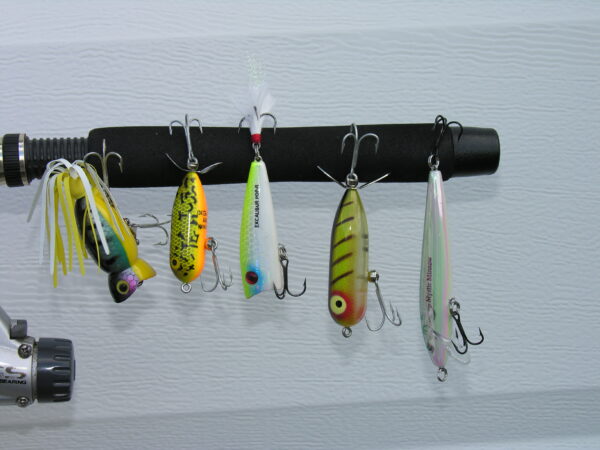 Shown are a variety of sizes, shapes and colors of topwater hard baits that really stir up bass action. (Courtesy of Bill Graves)

If you live in central Aroostook, it will require a bit of driving to reach some smallmouth-filled waterways, but most regional sportsmen are used to traveling for top-rate cast and blast outings. The St. John River is the best northern option, with lots of launch sites from Van Buren to Fort Kent to Madawaska and miles of shoreline casting for plentiful bronzebacks. Bass waters abound in the southern Aroostook area; Mattawamkeag and Pleasant Lakes, Crooked Brook flowage, Baskahegan and Wytopitlock Lakes and of course the Penobscot River in Medway.

Crowding and overfishing is never a problem at any of these locations, and it’s common to boat at least a dozen 1- to 2-pound smallies per outing. A couple of times per trip a big bass of three pounds or more will pounce on a topwater bait, and that’s a tug-of-war to remember.

Other species may have lockjaw due to low water and hot, sunny days, but the bass are ready and willing. Even youngsters and novice casters will catch fish.

A cold front moves through today with scattered showers that will taper off this evening as high pressure builds into the region with partly cloudy skies.
Crown Politics END_OF_DOCUMENT_TOKEN_TO_BE_REPLACED

All five candidates running for two seats on the Fort Kent Town Council gathered at a live question and answer forum.
Our Sponsors END_OF_DOCUMENT_TOKEN_TO_BE_REPLACED