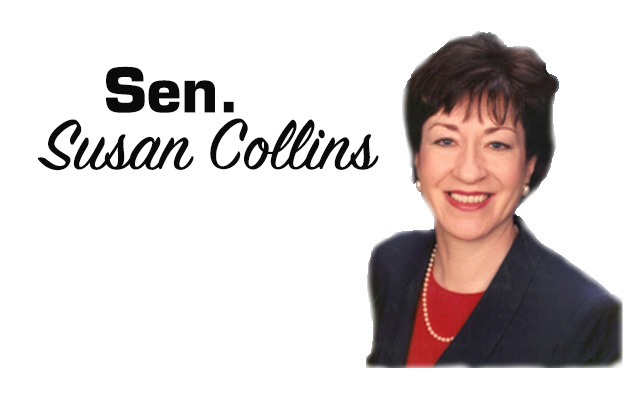 Honoring our veterans through resources and recognition

U.S. Sen. Susan M. Collins, R-Maine • August 2, 2022
Recently, I attended a White House signing ceremony for three bills I championed to help ensure that America’s veterans receive the benefits, resources, and recognition they earned through their service to our country.

Recently, I attended a White House signing ceremony for three bills I championed to help ensure that America’s veterans receive the benefits, resources, and recognition they earned through their service to our country.

It was a pleasure to witness the President sign into law two important bills that will strengthen breast cancer detection and prevention services, and one to pay tribute to the courageous Army Ranger veterans of World War II.

Women are the fastest-growing part of our veteran population.  The bipartisan MAMMO for Veterans Act I co-authored will expand veterans’ access to high-quality breast cancer screening and lifesaving cancer care.  Specifically, the law will require the Department of Veterans Affairs to develop a strategic plan to improve breast imaging services, create a telemammography pilot program for veterans in areas where VA does not offer in-house mammography, and expand veterans’ access to clinical trials through partnerships with the National Cancer Institute.

As a companion to that bill, the President also signed the SERVICE Act of 2021.  This legislation expands eligibility for VA mammography screenings to veterans who served in areas associated with burn pits and other toxic exposures.

The U.S. Army Rangers Veterans of WWII Congressional Gold Medal Act provides for the award of a Congressional Gold Medal to World War II Army Rangers in recognition of their heroic service.  Approximately 16 million Americans served in the U.S. military during that war.  Among those soldiers, only 7,000 were Rangers. Of that elite group, there are now just a handful of living World War II Rangers left.

Those Rangers distinguished themselves in both the European and Pacific theaters.  They are perhaps best known for their astonishing bravery and determination on D-Day, when they scaled the sheer 100-foot cliffs at Point du Hoc to eliminate the German threat to the amphibious landings at Omaha and Utah beaches below.  Six months later in the Philippines, another Ranger battalion carried out a daring operation behind enemy lines to rescue more than 500 Allied POWs from a Japanese prison camp.  That legendary special-operations unit established a legacy that continues to inspire us eight decades later.

In addition, both chambers of Congress have overwhelmingly passed historic legislation to address toxic exposure among service members.  The Sergeant First Class Heath Robinson Honoring Our Promise to Address Comprehensive Toxics (PACT) Act of 2022 will ensure all generations of toxic-exposed veterans receive the health care and benefits which they have earned.

The bill is named after Sergeant First Class Heath Robinson, who deployed to Kosovo and Iraq with the Ohio National Guard.  Tragically, he died in 2020 from toxic exposure as a result of his military service.  Among its many priorities, the PACT Act will expand VA health care eligibility to Post-9/11 combat veterans, which includes more than 3.5 million toxic-exposed veterans.  It will add 23 burn pit and toxic exposure-related conditions to VA’s list of service presumptions, and it will expand presumptions related to Agent Orange exposure to include Thailand, Cambodia, Laos, Guam, American Samoa, and Johnston Atoll.  Additionally, it will strengthen federal research on toxic exposure, improve VA’s resources for toxic-exposed veterans, and expand training for VA health care and benefits professionals.

The brave men and women who have served in our military put themselves in harm’s way, and it is our responsibility to provide them with the highest quality health care for any illnesses linked to their military service.  For far too long, veterans exposed to toxic substances such as Agent Orange and burn pits during their deployments have not received the recognition or resources they needed.  This comprehensive legislation puts us on the path to fulfilling the enormous debt we owe these veterans by expanding critical research on toxic exposure and providing relief to toxic-exposed veterans who may be experiencing serious illnesses and debilitating symptoms.

Our nation has a duty to honor the courage and sacrifices of those who serve, not just with words, but also with actions.  As a Senator and the grateful daughter of a veteran, I am committed to ensuring that the government keeps that sacred obligation.

Maine’s longest serving legislator, Martin was first elected to the Maine House of Representatives in 1964 when he was 23.
Our Sponsors END_OF_DOCUMENT_TOKEN_TO_BE_REPLACED