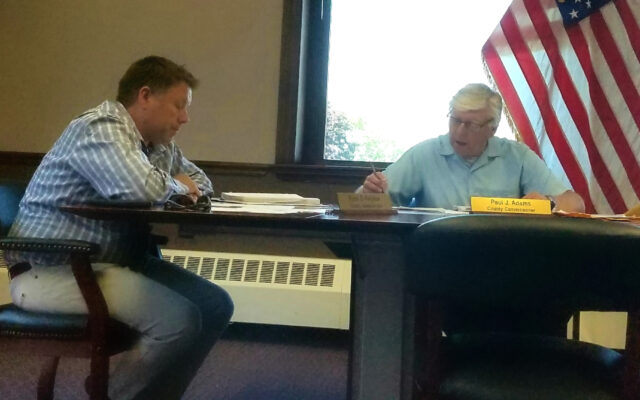 Joseph Cyr • July 22, 2022
A change in when towns see their assessment for the Aroostook County tax could be in the works.

HOULTON, Maine — A change in when towns see their assessment for the Aroostook County tax could be in the works.

Aroostook County Administrator Ryan Pelletier discussed the proposed change with the County Commissioners during a Wednesday, July 20, meeting in Houlton. Exactly when the transition will happen remains uncertain.

Aroostook County’s government operates on a calendar year budget of Jan. 1 to Dec. 31. Under the new proposal, the County’s budget would shift to a July 1 to June 30 cycle.

“We decided a few years back to begin the process of changing the County’s fiscal year,” Pelletier said. “But then in 2020, the pandemic hit and we went remote (for meetings) and everything about this got tabled.”

During the normal budget process, commissioners build a budget in the fall, typically around September and October. The county tax assessment is then presented to all of the municipalities in Aroostook County for inclusion on property tax bills.

Aroostook would not be the first county to make the switch. Kennebec has also adopted the fiscal year schedule, Pelletier said.

So why is such a change needed? The answer is cash flow, according to Pelletier.

County tax bills are sent out in February, but municipalities have until Sept. 1 to pay them. Towns also have a two-month window before interest on late payments kicks in on Nov. 1.

“Many towns wait until Oct. 31 to bring the check in,” Pelletier said. “Imagine running a county for an entire 11 months without actually receiving any revenue for that fiscal year. It forces us to do a tax anticipation note each spring.”

Those notes can run upward of $2.5 million, he said.

“We are borrowing to operate and spending about $35,000 a year in interest that the taxpayers of Aroostook are paying for,” Pelletier explained.

If the change is approved, the county would adopt a six-month special budget to cover from January to June as well as a full, fiscal year budget to cover from July 1 to June 30. In the short term, it means local municipalities — and therefore taxpayers -– will see a much heftier county tax assessment for a one-year period.

But municipalities will not have to pay the full amount all at once. That special six-month budget can be deferred over a number of years, if commissioners approve that method of payment.

Notices on the proposed change were sent to all of the municipalities in Aroostook County, allowing time for feedback.

Commissioners will take public comments on the proposed change at its Aug. 17 meeting in Fort Kent. A similar meeting will take place in Caribou on Nov. 16.

The board also approved the appointment of Mandi Craig as operations assistant; hired Tessa Cloney and Jaimee Michaud as dispatchers for the Aroostook County Sheriff’s Office; and hired Eric Corbin as a deputy.

The next meeting of Aroostook County Commissioners is scheduled for 1 p.m. Aug. 17, in Fort Kent.