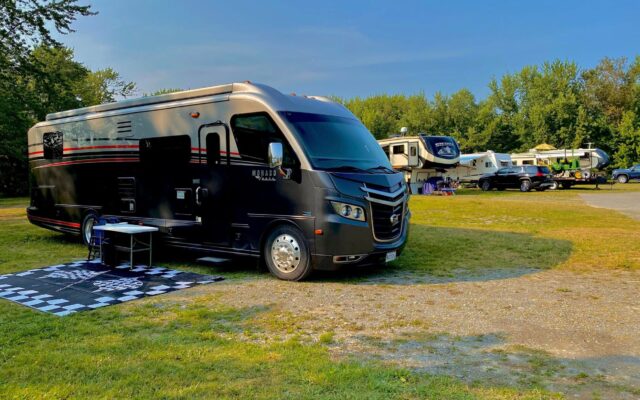 Jessica Potila, SJVT / FhF Staff Writer • June 8, 2022
Business is booming at Aroostook County recreational vehicle parks, and most are having to expand to meet the demand, including the state’s only town-owned facility.

FORT KENT, Maine — Business is booming at Aroostook County recreational vehicle parks, and most are having to expand to meet the demand, including the state’s only town-owned facility.

Several Aroostook RV parks have increased their camping sites in response to a growing number of visitors since the pandemic. One family-owned park in Eagle Lake even sold the business to shareholders to help them keep up with the excess demand from customers.

Maine’s tourism industry has been recovering since a marked dip in 2020 caused by the pandemic travel restrictions that kept tourists from other states and countries home. But COVID-19 appears to have increased tourism to Aroostook RV parks — including many vacationers from Maine — and that trend is not letting up this summer.

Birch Haven Campground in Eagle Lake added 40 new RV sites in the past two years due to an increased demand that came mostly from the pandemic.

“A lot of people started camping because of COVID. A lot of people didn’t want to leave the state so they decided to camp and explore the state,” owner Dale Roy said. “We were completely full last year and had to turn people away.”

The Roys sold the campground to 38 shareholders this year as a result of the demand in business but remain part owners in the park.

“It was a lot of work for just me and my wife,” Roy said. “This way we can keep it the way it is and not worry that we will sell it to someone who will in turn sell off the campground and turn it into condos or something.”

The Fort Kent RV Park is unusual in that it is owned by the town and run by the recreation department.

Fort Kent has added six recreational vehicle spaces this year, bringing to 14 the number of sites at the town’s self-contained RV park. Some improvements include internet, cable and telephone access that are available to campers.

“We were so busy last season, it only makes sense to expand,” Fort Kent recreation and parks director Jason Nadeau said.

Land was already available at the back of the RV park to accommodate the new camping sites, but the road leading into the park had to be extended. The expansion also included upgrading electricity hook-ups from 30 amps to 50 amps, Nadeau said.

In Grand Isle, George Dionne had no intention of opening an RV park when he purchased land from a friend in that town many years ago.

Dionne adapted the land to accommodate RVs so that families would have places to stay during the 2014 World Acadian Congress held in the St. John Valley.

Dionne has kept the park open since, and expanded from 12 to 21 sites in the past two years, largely due to the increase in interest brought on by COVID-19, he said. Many of his season holders are Maine residents.

The Grand Isle RV Park only opened for the season on May 15, but things are looking good for business. The park is already 95 percent full, he said.

Dionne said part of the park’s success may be due to some good old-fashioned northern Maine hospitality.

Clare Arndt, owner of Arndt’s Aroostook River Lodge and Campground in Presque Isle, said the 75-site campground that opened in 1994 has seen a steady increase in business, even prior to the pandemic, but last year something unusual happened.

“Last year we had someone from every state except four. We had people from 46 different states last summer,” she said.

Roy said he is pleased to see the camping industry achieve more popularity among tourists.

“We’re seeing a lot of new people,” Roy said. “The majority of the new people are young families, and it’s nice to see that.”