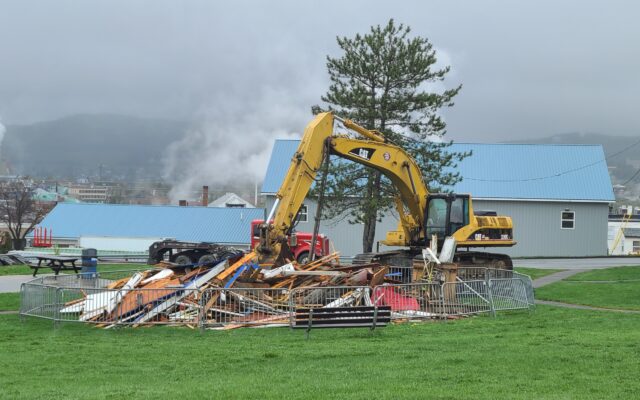 Emily Jerkins, • May 20, 2022
After residents expressed concerns over dilapidated structures and vandalism, Madawaska has torn down a decrepit gazebo.

MADAWASKA, Maine — After residents expressed concerns over dilapidated structures and vandalism, Madawaska has torn down the decrepit gazebo at the center of Bicentennial Park.

In the summer of 2021, Madawaska resident Steve Deschaine approached the town’s selectmen in a meeting after he had taken his son to play in Bicentennial Park and noticed the gazebo’s disrepair. Bands play on the gazebo every week for Madawaska’s Music in the Park, and it has broken railings, rotting floorboards and a roof in shambles, Deschaine said.

Deschaine also noted benches in the park and the plexi-glass structure containing the wooden re-creation of the Liberty Bell had been vandalized. Students at Madawaska High School petitioned the town in July 2021 to remove the bell, which had been installed in the park in 2015, to replace it with a gaga pit. 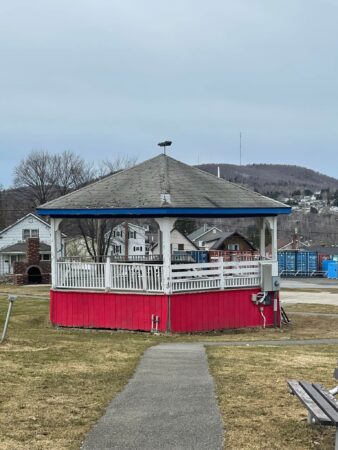 The state of the gazebo at Bicentennial Park in Madawaska before it was torn down on May 16. (Courtesy of Steve Deschaine)

On Oct. 12, the town relocated the bell to the Acadian Landing: the location where Acadians first arrived in the St. John Valley in 1785 after British forces chased them out of Nova Scotia during the French and Indian War, but the park’s gazebo continued to stand in its state of disrepair.

“I was looking around and I was like this is embarrassing to our town because we have music in the park here every summer,” Deschaine said. “People from out of town show up and it’s making Madawaska look bad.”

Deschaine said he had waited a whole year after bringing his issues with the park’s gazebo to the town when he had seen that Music in the Park was being advertised yet again. Concerned for the safety of the musicians, while taking into consideration the refresh of the town’s council after last year’s elections, Deschaine uploaded to Facebook several photos of the gazebo in its run-down state, urging the town to reconsider taking the structure down.

“It’s not anyone’s fault, it just needed to be addressed,” Deschaine said. 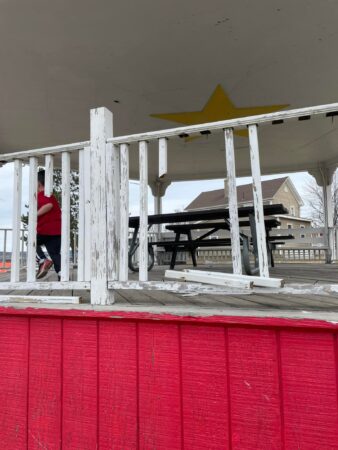 Broken railings lined the gazebo at Bicentennial Park in Madawaska before the structure was demolished on May 16. Courtesy of Steve Deschaine

Having seen Deschaine’s photos on facebook, another resident, Jessica Blalock, sent screenshots of the post and photos to Madawaska Town Manager Gary Picard. Blalock, who is a St. John Valley Times advertising representative, said she uses the park twice a week to walk her dogs and has seen the vandalism of the benches and gazebo.

Blalock expressed her concern for the park at a selectmen meeting held on May 3 where selectmen unanimously voted to tear the structure down.

At the same meeting was musician Wayne Cyr, who provided insight for future projects in the park. Should the town choose to rebuild a stage, Cyr suggested that it be constructed on the west side of the park facing east with a backing serving as protection from the sun and wind. It also would allow people attending Music in the Park to see and hear the musicians from anywhere in the park.

“My hopes for the future of the bicentennial park is that we build a pavilion of some kind where people can picnic and hold family festivities, in addition to Music in the Park and the Acadian Festival, and where the park is no longer subjected to vandalism so the community can all enjoy the park for many years to come,” Blalock said.

Board of Selectmen member Jason Boucher said the idea was accepted overall, but that rebuilding the stage would have to be tabled for summer of 2023. Several weeks after the meeting, the gazebo met its end on May 16, leaving behind only the electrical box that had been attached to it to continue to provide power to the park.

Boucher said selectmen have done some outreach and are toying with ideas for rebuilding the stage that will be used for Music in the Park. One possibility is to utilize the carpentry class at the St. John Valley Technology Center in building the future stage, but for this summer the town will provide a tent for musicians to play under until the new stage can be built.