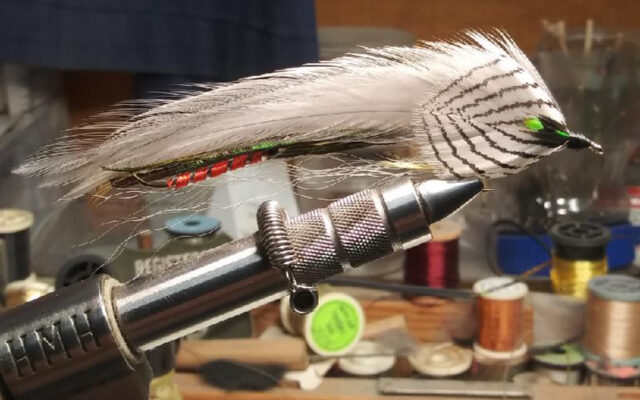 Bill Graves, Special to the Fiddlehead Focus • May 12, 2022
May is ice-out and spring trolling time, a chance to hook the largest fish of the season, and it’s a tried and true opportunity for tandem streamers.

I would rather catch one fish on a fly than half a dozen on bait, plugs or lures. A lightweight fly rod offers a more enjoyable tug of war, and to fool a big trout or salmon into striking a batch of feathers, floss and fur on a hook, especially a pattern you tied yourself, is very satisfying.

May is ice-out and spring trolling time, a chance to hook the largest fish of the season, and it’s a tried and true opportunity for tandem streamers.

Trolling flies used to be single-hook, long-shank patterns that measured 2 to 3 inches, but by using hooks joined by a piece of flexible wire a fly was better able to imitate the actual size of a smelt or large minnow and yield a more natural, realistic movement through the water. The wire connection would often bend or kink after playing a fish and require repair and straightening, so eventually some forward-thinking fly tier began using heavy monofilament.

Mono hook connectors withstand twist, torque and tension throughout playing and landing fish after fish, then return to their normal straight alignment so the tandem always flows like a live baitfish. There are rolls and pre-cut lengths of plastic shrouded wire now as well, so each fly tier can decide their own length, method and style of joining front and back hooks on tandem streamers.

Over decades of experimenting at my fly bench I’ve settled on a specific combo. My front hook is always barb down while my trailer hook is barb up, and my rear hook is a size smaller than my lead hook. For example, my two favorite combos for local lakes are a size 4 front and a size 6 rear hook or size 2 front and 4 rear for larger species. Long wing feathers cover the rear, upturned hook, giving the streamer a lifelike look and motion as it’s pulled though the water. 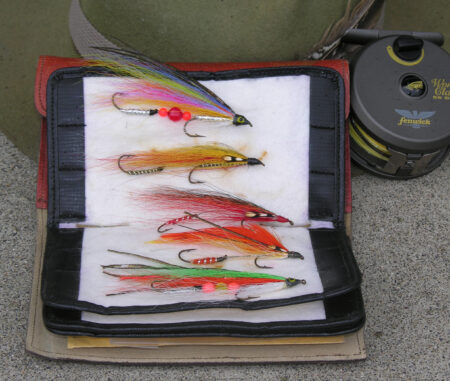 It’s good to have a variety of styles and colors of streamer flies in your fly wallet. Tie on at least two very different patterns and see what the fish want on a certain day. (Courtesy of Bill Graves)

If a barge load of regional anglers were asked to select a favorite trio of tandem streamer patterns, it might amaze you how short and similar the selection would be. Most fly fishermen are pretty set in their ways, and many don’t own or use more than six trolling streamers. Think for a few seconds and see if you can name a dozen tandems in a minute.

Ask the same sportsmen what their most productive fly is and the answer will be similar, if not exactly the same as their favorites. It’s basic statistics. The tandem you used the most will catch the most fish, but that certainly doesn’t mean it’s the best all-around pattern. There are a handful of great streamer flies, but the best one on a certain day changes constantly with weather and water conditions, the bait fish availability and several other variables. Variety is not only the spice of life, it applies to fishing, too, and change is not only good, it’s essential to consistent success.

There are two basic styles of streamer flies, bait fish imitators and attractor patterns, the latter being vividly colored patterns that resemble no living aquatic creature, but cause a fish to strike out of reflex or aggression. Each of these two offer patterns constructed with wings made of feathers, some sort of hair or fur or a combo of several feather, hair and synthetic materials. They all offer a different look and motion as they are pulled through the water.

The most popular patterns in most Aroostook fly boxes would include a gray ghost, Mickey Finn, black nose dace, red and white, Magog smelt and supervisor. I highly recommend spring anglers tie or buy a few more tandem options that I guarantee will improve the number and size of fish taken while trolling. Add a blue devil, Ouananiche sunset, Colonel Bates, demon, nighthawk or senator to your ice-out fly inventory for lakes, streams and rivers as water levels decline.

My trolling approach that seems to yield the best results is to offer a variety of feather and hairwing tandem attractor and imitator patterns on multiple rods. Years ago I developed a triple swivel system that allows me to troll two flies at a time on one rod with little chance of tangles. Any fly that doesn’t produce a strike within an hour is changed, and if one wing style, color combo or pattern offers consistent action it’s time to tie on another duplicate or similar streamer.

It’s been a long winter but much anticipated ice-out trolling is at hand. Check your fly supply and add a few new tandem streamer patterns. I’m betting the rewards will be enjoyable.

The Aroostook County Republican Committee will hold their election year County-wide caucus from 9 a.m. to noon on Saturday, Feb. 12, at the Presque Isle Inn & Convention Center.
Our Sponsors END_OF_DOCUMENT_TOKEN_TO_BE_REPLACED