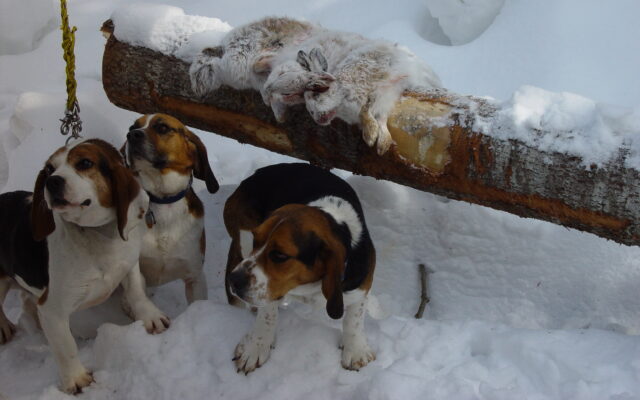 Bill Graves, Special to the Fiddlehead Focus • March 15, 2022
The second half of March has more daylight hours, warmer sun and milder weather conditions conducive to the most enjoyable ice fishing and rabbit hunting of the entire winter.

The old adage that March comes in like a lion and goes out like a lamb certainly seems to apply to Aroostook County most years. For outdoorsmen, the first half of March usually features single-digit nights and windy days leading to chill factors that preclude most sporting ventures. Personally, I look forward to the Ides of March, the second half of the month, with more daylight hours, warmer sun and milder weather conditions conducive to the most enjoyable ice fishing and rabbit hunting of the entire winter.

For hare hunters who don’t own hounds, March offers the best results and easiest travel conditions, followed by the action of late November or early December during most years. Along with reduced snow cover and decent weather, March is mating season for snowshoe hare and they become far more active and visible during the day. Travel over the snow mass usually still requires a set of snowshoes, but generally the snow has firmed and shrunk enough that a set of small, easy-to-maneuver bear paws will work.

Occasionally in late March, a pair of high boots allow easy wading in most woodlots and brushy pastures where rabbits abound.

Our regional rabbit population are actually snowshoe hare, also called varying hare since they change fur color from brown to white each winter for better concealment and then back to brown in the spring. Hare are crepuscular animals, meaning by nature they are much more active at twilight and at dawn. During March, however, it’s mating season and the hare are active all day as they move about looking for a partner.

Combine the increased movement with the improved weather and March yields great hunting, a perfect time to introduce a youngster or novice hunter to the sport. 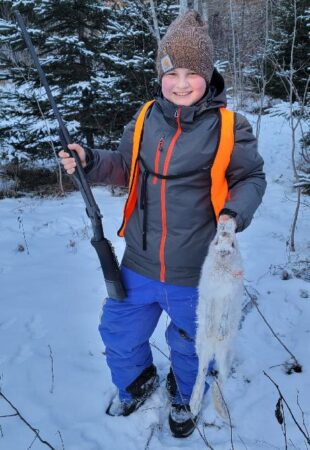 March is often the perfect time to take young hunters afield for rabbits thanks to better weather and less snow cover. Connor Cushman of Mars HIll enjoyed success on this outing. (Courtesy of Bill Graves)

Although a solitary shooter can walk up rabbits, two or three hunters utilizing stop-and-go tactics through sparse brush and thin tree cover really helps scare up bunnies. The game plan is to separate by 10  to 15 yards between each shooter, always keeping in sight of each other so nobody gets too far ahead and perhaps into another’s shooting lane. Fluorescent orange hats and/or vests greatly help hunters to move forward evenly and at the same pace as the bright clothing shows up well even in the dense sections of forest.

It’s pretty simple to establish a rhythm of movement, since slogging through the woods on snowshoes isn’t a quick method of travel to start with. Truly successful rabbit stalkers spend twice as much time looking as they do walking; while it’s true that some snowshoe hare will make a run for it when they hear someone approaching, many prefer to depend on their white winter camouflage to blend in, and these rabbits hunker down and wait for danger to pass.

Spotting a white game animal surrounded by snow is no simple task. That’s why it’s truly crucial to walk 10 to 12 steps, then stop and scan. Spend at least two minutes perusing every nook and cranny that seems a likely hiding place. But don’t try to envision an entire rabbit. Endeavor to spot the shiny eyes or the slight movement as the nose twitches or the ears move to keep track of the hunter. Having multiple shooters increases the chance that a hare might slightly alter position to better keep track of one sportsman, giving another sport a better chance of spotting the quarry.

Another result of slow, stop-and-spot hare hunting is that after a minute or two of no motion, a rabbit sometimes thinks it’s been spotted and makes a run for it. Often the shooter has no idea a rabbit is even nearby until the anxious bunny makes a break. Patience is a must for walk-up hare tactics, and sharp eyes also prove to be a great asset.

As for the guns of choice for rabbit hunting, most hunters already own a suitable firearm for other small game. Partridge hunters have a shotgun that can serve dual duty, and most County gun cabinets hold a .22 for plinking and target practice. A .22 with open sights or a low-power scope ruins less meat than a scattergun and is great for stationary rabbits. Fast-hopping hare require a wider pattern and more pellets to assure consistent success, so a 3” 20 gauge or 2 ¾” 12 gauge better fit the bill.

I solve the debate by cheating a bit. My favorite long gun for rabbits is an old over-and-under Stevens. With the quick flip of a lever I can select either the .22 LR top barrel or the bottom 20-gauge tube. It’s a win-win combo. Once in a while when I’m feeling really sporty, I lug my Thompson Contender single-shot .410 handgun for shots 25 yards or closer. I have a couple of friends who truly elevate the challenge and hunt hare with bows and arrows. Now that’s an elite sport.

Most rural Crown of Maine residents have hare covers within five minutes of home, and even urban-edge homes have rabbit haunts 10 minutes away.  In addition to the excitement of the hunt, rabbit stew and fried rabbit offer tasty table fare.  On top of that, after being housebound for much of the winter, it’s a real treat to get outside on a mild March morning and enjoy a walk in the woods.  Rabbit season ends this month, so check the local weather forecast and find a suitable day for a snowshoe hike in search of snowshoe hare.

Cloudiness in the region Thursday afternoon along with a slight chance for isolated showers Thursday night and Friday.
Crown Politics END_OF_DOCUMENT_TOKEN_TO_BE_REPLACED

The Aroostook County Republican Committee will hold their election year County-wide caucus from 9 a.m. to noon on Saturday, Feb. 12, at the Presque Isle Inn & Convention Center.
Our Sponsors END_OF_DOCUMENT_TOKEN_TO_BE_REPLACED