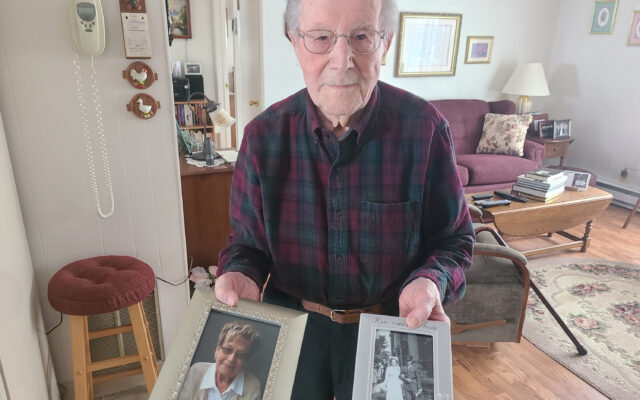 Emily Jerkins, • February 15, 2022
Still living and driving on his own, one St. John Valley native will turn 103 in March and doesn’t see himself out of the driver’s seat anytime soon.

MADAWASKA, Maine — Still living and driving on his own, one St. John Valley native will turn 103 in March and doesn’t see himself out of the driver’s seat anytime soon.

Armand Martin of Madawaska can be spotted driving through town, buying his own groceries, and going for walks up and down his street, returning afterward to the apartment he lives in on his own.

Martin serves as an inspiration to people in his community in a rural state with the oldest population in the nation, and where many families face serious issues related to the safety of their aging relatives, including housing and transportation.

“He’s just an amazing person and you would not think he’s that old,” Tina Cormier of Madawaska said. “Just looking at him, you’d think he’s 70 years old.”

Born on March 1, 1919, Martin spent his childhood on a farm in Keegan before moving out at the age of 16 to work in the Katahdin region, including Baxter State Park, placing the large rocks that still line its roads.

He moved to Madawaska just before joining the U.S. Army where he served in Newport, Rhode Island, in 1942.

Martin has been married twice to different women, both named Yvette. He has five children: Gene who lives in Ohio as well as sons David, Roger and Phillip who are in Madawaska, and Phillip’s twin sister, Phyllis St. Amant, who resides in North Carolina.

Martin’s family reaches through five generations with the addition of his great-great-granddaughter, Lillian Whitaker. 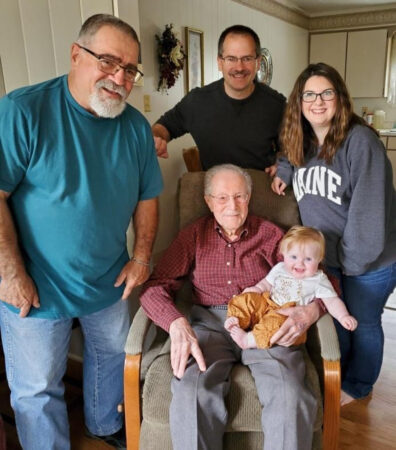 Five generations in one photo in Madawaska. Armand Martin (center) sits with his great-great-granddaughter Lillian Whitaker on his lap. Behind them from left are Phillip Martin, Brian Martin, and Chelsea Martin-Whitaker. Courtesy of Phillip Martin

He wouldn’t have made it this far without his favorite pastime of reading, and especially likes old westerns and fiction, he said. David Martin said he remembered his father receiving enough books to fill a bookcase when the old Miller’s store discontinued some of its inventory. It didn’t take very long for Martin to read them all, his son said.

Armand Martin is reading “A Bridge Too Far” by Cornelius Ryan, though he intends to finish it and move on to the next book soon. He said that if he had to decide on a favorite author, he would say that John Greyson is one of them, but there are just too many good authors out there to name.

In addition to reading, Martin said that staying busy, eating well and staying active are the things that keep him going. During the winter months, Martin walks on his treadmill daily, but when the roads are clear, he prefers to walk along his street with a goal of at least a mile per outing.

Cormier, who works at Northern Maine Medical Center in Madawaska, used to take care of Martin’s mother at the nursing home where she died at age 99. Cormier is one of the many local residents to have spotted Martin behind the wheel of his own car.

Martin said he still likes to drive to the grocery store or pharmacy whenever he gets the chance, but typically will have one of his three sons who live in Madawaska take over if he needs to go beyond town lines.

After an accident that totaled his car approximately five years ago, Martin was without his wheels for only a couple of weeks before he leased a new vehicle that he eventually purchased in 2020 at the age of 101.

With this new set of wheels, Martin said that he doesn’t see himself off the roads anytime soon, though he may just not be on them as much as he once was.

Correction: An earlier version of this story contained two errors. Martin’s mother died at the age of 99, and Martin leased a new vehicle two weeks after he totaled his car, which he eventually purchased in 2020.