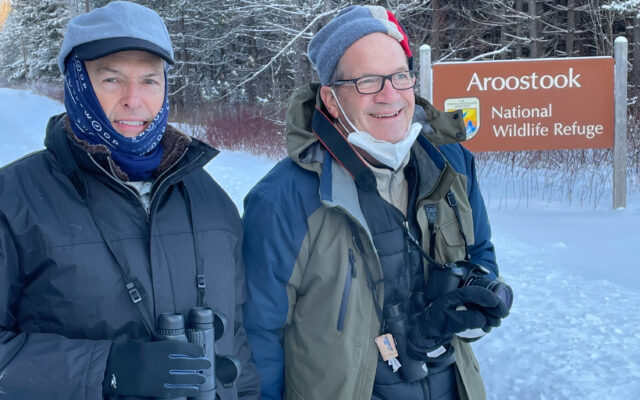 Emily Jerkins, • January 10, 2022
Many species of birds fly south for the season, but some bird watchers fly north to see Maine’s winter avifauna.

LIMESTONE, Maine — Many species of birds fly south for the season, but some bird watchers fly north to see Maine’s winter avifauna.

Bob Clements left his home of sunny Daytona Beach Shores to start off his New Year in the snow of Aroostook County. With roughly 10,000 species of birds in the world, Clements has traveled to many places to observe these avians in person, and has so far seen around 1,000 different birds.

Even though many migratory birds travel south, Clements knows some only travel so far, which is why the Florida native and his friend Chuck Honaker made their way to Northern Aroostook.

“We live in Florida so many of these birds in the winter that you get that have come down from the Arctic or the far north Canadian provinces don’t come down all the way down to us,” Clements said. “So as we bird watchers want to expand our experiences of seeing as many birds as possible, we have to go where the birds are. That’s where they are right now.”

Clements is no stranger to the cold as three years ago he had traveled to Antarctica to walk with the penguins. The County may not be as difficult to navigate, though birds from the Arctic Circle and northern provinces of Canada migrate south to Maine, which is still unfamiliar to Clements and Honaker.

Clements made several calls to find a guide and landed on Presque Isle’s Department of Environmental Protection director, Bill Sheehan.

“He’s the bird guru up here in Aroostook County” Clements said. “He is definitely an accomplished birder since college days, probably high school days. So he knows a great deal about birds.”

On Jan. 4, Sheehan took Clements and Honaker to the Aroostook National Wildlife Refuge in Limestone where the pair managed to cross a few birds off of their lists. Familiar with their southern cousins, Clements came with the hopes of finding a Bohemian Waxwing and Northern Shrike along with 18 other species of birds.

“I saw three new birds.” Clements said. “My partner that came with me saw six birds that are new to him. For a two-hour drive, that’s quite good.”

As the pair spotted birds on their list, they uploaded their pictures and relevant data to eBird, a worldwide repository by Cornell University that logs where birds are spotted.

Bird watchers can upload information such as the bird’s species, the quantity of birds found in an area, and the location where the birds were spotted. Many birder’s use this information to search locations and see what kinds of birds people have found in the area.

“It gives you a great barometer of what to expect,” Clements said. “It’s very valuable scientific information.”

Clements said the information from the site allows researchers to study various bird populations and migratory patterns. This data aids in the understanding of the effect that habitat loss and obstructions such as windmills and skyscrapers have on flight patterns.

“You don’t have to upload a picture,” Clements said. “But the data you do submit is definitely reviewed and it helps build a current evaluation of how the bird population is doing.”

Clements and Honaker finished their bird watching excursion amid snowstorms, wind and icy conditions in Lubec and Bar Harbor to catch some of Maine’s maritime species such as the Great Cormorant and Bufflehead duck. The pair even spotted a family of Common Eider nesting together on the beach before trekking back to Florida.

Three candidates are vying for two seats on the Fort Kent Town Council. Voters will decide which of the three -- Corey Pelletier, Brandon Dayton or Andrew Caron -- will get a seat during the town’s annual election on Monday, March 22.
Apex Weather END_OF_DOCUMENT_TOKEN_TO_BE_REPLACED

A trough will keep plenty of clouds across the Valley today along with a slight chance for precipitation. Mostly cloudy skies continue overnight as a low pressure area over the Mid-Atlantic tracks into the Gulf of Maine and strengthens as it moves from Cape Cod to Nova Scotia.
Our Sponsors END_OF_DOCUMENT_TOKEN_TO_BE_REPLACED