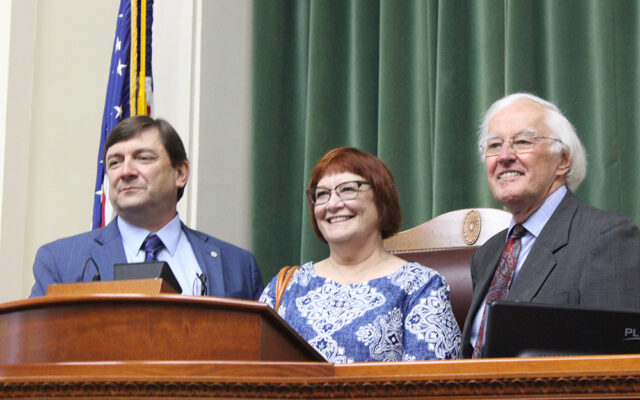 “There are only a handful of people in the history of our state who have had the type of profound impact on our government, our laws and our lives like John,” said state Senate President Troy Jackson, D-Allagash.

“In almost an act of defiance, John grew up speaking both English and French. He then spent his life serving the Maine people almost as if to set the record straight for the history books about the value of Maine Acadians and their contributions to the state,” Jackson said.

Martin grew up speaking both French and English in the St. John Valley, two decades after the Maine Legislature banned the speaking of French in school. This law sought to stamp out the language and culture that connected Franco-Americans with their ancestors, heritage and culture. Martin has spent his life serving the people of Maine, advocating for Maine Acadians and elevating the contributions of Franco-Americans, Jackson said.

In the Legislature, Martin has served in both the House and the Senate, serving 10 terms as Speaker of the House. He’s worked for members of Congress and on presidential campaigns, all while teaching political science and government to students at the University of Maine at Fort Kent.

Throughout his career, language has become a powerful bridge. His ability to speak both French and English is what has allowed him to travel to French-speaking democracies around the world to teach students about how the U.S. government works.

“It’s hard to put into words what the Acadian Archives at the University of Maine at Fort Kent mean to the people of the St. John Valley, who once thought their language, culture and heritage would disappear forever,” Jackson said of Lise Pelletier.

“Lise has been instrumental in making the archives what they are today, a place where Maine Acadians can reconnect with the past and ensure the stories of their ancestors will never be forgotten,” he said. “I’m extraordinarily grateful to Lise for her service to the St. John Valley and her contributions to the Maine Acadian community.”

Pelletier served as UMFK’s director of the Acadian Archives — Archives acadiennes —  a research and preservation center about Acadians of the St. John Valley and Franco-Americans of New England, where she performed research, gave presentations on the history of Acadia and the St. John Valley and hosted guest speakers, workshops and cultural events.

Pelletier is also a board member of the Congrès mondial acadien 2014 and has a PhD in French Acadian Literature from the University of Maine.

“The preservation of Maine’s Acadian Heritage has been made possible largely due to the role of Maine’s historical societies and the commitment of Maine Acadians, like Diane Castonguay of St. Agatha, to keep the Acadian language and culture alive in their communities,” Jackson said.

“Diane embodies what Maine Acadians have contributed to our communities. She is a pillar of the community and longtime special education director, who has gone above and beyond for the students she teaches and her neighbors. I’m grateful for her friendship and service to our community,” he said.

Castonguay is a member of the board of directors of the Ste-Agathe Historical Society and has worked to preserve local genealogy and history, in addition to helping share French and Acadian culture with the next generation.

She spent her life serving her community as a teacher at both the University of Maine at Fort Kent and Madawaska High School, and as a selectperson for the town of St. Agatha.

She was unable to accept her induction into the State of Maine Franco-American Hall of Fame in person.

Canadian high pressure building down from the northwest sends us some more frigid air for the late week period.
Crown Politics END_OF_DOCUMENT_TOKEN_TO_BE_REPLACED

Three candidates are vying for two seats on the Fort Kent Town Council. Voters will decide which of the three -- Corey Pelletier, Brandon Dayton or Andrew Caron -- will get a seat during the town’s annual election on Monday, March 22.
Our Sponsors END_OF_DOCUMENT_TOKEN_TO_BE_REPLACED