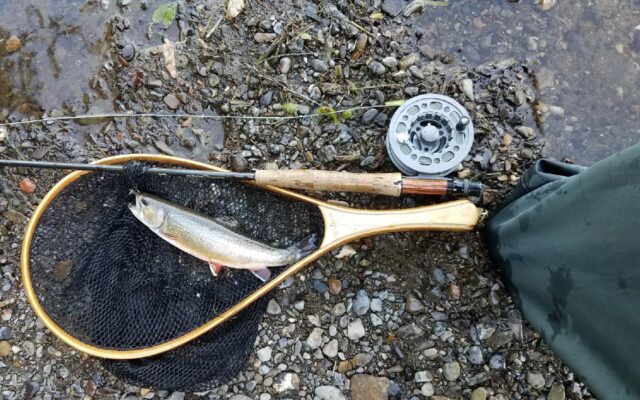 Bill Graves, Special to the Fiddlehead Focus • August 24, 2021
The noise and hubbub slowly quieted as the judge banged his gavel to restore order after the charges were read. An oddly dressed man rose at the front of the courtroom. Hip waders, fishing vest, creel and net and a felt hat ornamented with numerous sizes and colorful patterns of flies set his appearance.

The noise and hubbub slowly quieted as the judge banged his gavel to restore order after the charges were read. An oddly dressed man rose at the front of the courtroom. Hip waders, fishing vest, creel and net and a felt hat ornamented with numerous sizes and colorful patterns of flies set his appearance.

In a somber, yet determined tone, the angler stated he did indeed wish to address The Court, and felt he could offer a reasonable explanation of the circumstances that had brought him there. Any questionable actions and possible charges were due to undue provocation and intentional duress by a band of troublemakers.

“Your Honor, I’m a devout dry fly fisherman,” the sportsman offered, as if that were the plain and simple answer to the entire situation — and well it may have been.

It seems, upon further explanation, that this middle-aged, hardworking family man was the epitome of a true fly fisherman and a dry fly purist. He existed and plodded through 10 months of the year, and then became like a child at Christmas during July and August. All else took a backseat to his streamside trips of ecstasy those 60 summer days that would be the source of memories and fantasies that helped him survive the long winters.

The fly caster admitted modestly to being fairly adept at his hobby, but in truth he was one of those who caught trout, and big ones, when others could not. It was a challenge he met and enjoyed to the fullest on each outing.

From various rivers and streams throughout The County, the dry fly man had teased, coaxed and fooled many bragging-size brook trout into striking his own hand-tied fly patterns when many others had failed. His prowess and feats were the talk of the fly shops and sporting clubs.

Giant speckled-sided brookies in their secluded holding pools were always second-best when the two matched wits — until this summer.

One particular brush-shrouded eddy and its wary monster trout were giving the angler daytime fits and sleepless nights. There were at least half a dozen speckled-sided beauties finning about that weighed two to three pounds. For more than a month the stubborn fish had haunted his dreams.

The man tied flies each evening, created some new patterns and read an endless number of fishing books and magazine articles in hopes of finding a clue to catch one of the brutes.

The trout seemed to taunt him … eating real insects with a large swirl right next to his fake offering, and at least once an outing a trout would swirl at his fly, just to tease him it seemed.

Just once in the last two weeks did a brookie actually strike; what looked like a 3-pounder snapped the tippet on the first thrashing run.

The torment only served to keep the determined fisherman from trying other locations. Lots of average size trout were caught and released from the prized pool, hoping the next strike would be the “Big One.” He wondered if it was a challenge or addiction.

The fly man had been casting over the pool since first light, over an hour previously, with little satisfaction. He was holding his favorite lightweight dry fly rod under one arm and gazing into a box of newly constructed fly patterns when the two boys came thrashing through the shoreline brush.

In surprise, he tried frantically to wave the urchins away from the edge lest they scare the trout. The open box and entire selection of dry flies went airborne then, and the breeze swept them all over the water surface.

“Your Honor, I nearly keeled over when a huge trout came up and grabbed one of the caddis imitations I tied last night as it free floated downstream,” the fisherman explained. “Then the biggest trout I’ve ever seen came from under a bank edge and smashed a grasshopper imitation I’d concocted, but I still didn’t lose control. Even when the boys laughed and shouted that I sure had a funny way of fishing and ran along the shoreline to grab some of my free-floating flies to stick in their hats, I remained calm.

“The fishing was obviously ruined so I waded ashore and headed up the bank. The brown-haired lad asked why I was leaving when the fishing was just about to get good. I contained my irritation and explained that commotion such as yelling and splashing people in the stream tends to slow fishing considerably, not to mention the high sun and free flies all over the water.

“The redhead of the duo had the gall to say they fished the hole at mid-morning a couple of days a week and ‘caught lots of trout. Not much interested in small fish,’ I stated, to which he replied they had to stop at two apiece yesterday because that was all they could carry.

“Both lads actually seemed puzzled as my face reddened, my breathing quickened, veins in my forehead pulsed and I hopped up and down, moaning expletives under my breath. I was just calming down a bit a few minutes later when they had the nerve to tell me I was using the wrong kind of hackle; what I needed was a good old ‘Garden Hackle.’ With that the red-haired urchin dug out a Band-Aid can, rooted out a night crawler, hooked it up and cast into the eddy.

I was enjoying a good chuckle when the line suddenly straightened, the rod bowed and the kid turned, rod over his shoulder, and ran up the bank, hauling a wildly thrashing 2-pound trout onto the shore.

“I’m guessing I finally regained consciousness about 10 minutes later because the dastardly duo were packing up gear and four trout. They asked if I’d had a good nap and commented that perhaps I’d fish better if I got more sleep. The little brown-haired imp then threw me his worm can and suggested maybe I’d feel better if I caught a fish; and I guess that’s when I snapped, Your Honor.

“The sheriff says I must have been doing 20 miles an hour in hip boots when I came down Main Street waving my fly rod behind those kids. It took him two blocks to catch me with the cruiser, and I swear I’d have caught up with them in one more block because the big fish they were lugging was starting to slow them down.”

After a short recess the judge returned to the bench and gaveled the noisy spectators into silence.

“Upon deep consideration,” he intoned, “I find the defendant not guilty of all charges. I believe he’s inherently a good man who was incited into a short bout of temporary insanity; case dismissed.”

Upon returning to his chambers, the judge hung up his robe and sat solemnly in the big chair behind his desk. He stared thoughtfully at his small fly tying nook in the corner and the hefty brook trout mounted on the wall over it. “If it had been me,” he murmured softly, “I’d have shed those waders first thing, for better speed.

“Those impudent young, worm-dunking, whipper snappers better not show up in my courtroom anytime soon!”

Author’s note: Considering the rising heat index and COVID-19 cases we are all enduring, I thought a bit of humor might be appreciated to lighten the current mood. I hope my fictional story brought a smile. –Bill

High pressure to the east and and trough to the west will place the region in an area of southerly flow today, which will draw increasingly moist air into the region.
Our Sponsors END_OF_DOCUMENT_TOKEN_TO_BE_REPLACED