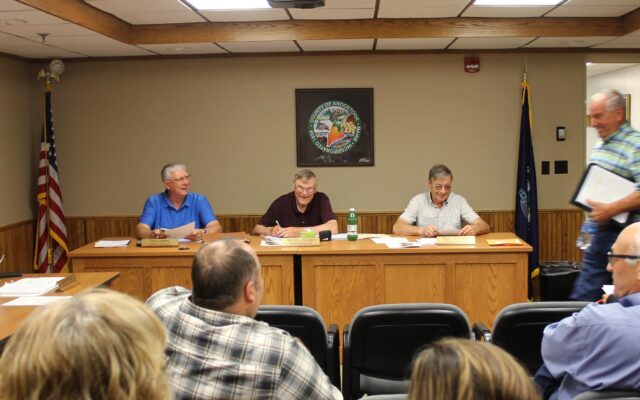 Hannah Catlin • July 26, 2021
The Aroostook County government is banding together with local towns to hire someone to manage the incoming $13 million in American Rescue Plan funds.

MADAWASKA, Maine — The Aroostook County government is banding together with local towns to hire someone to manage the incoming $13 million in American Rescue Plan funds.

While there’s a long list of county and municipal projects that could use the money, the extensive restrictions on the funds, especially at the county level, have led officials to decide they need a set of eyes solely dedicated to compliance. If an ARP-funded project breaks the restrictions, that money could be revoked in the future — a cost the region may be unable to afford.

“They’ve given us a 165-page playbook and said: ‘Here’s the guidance, but you determine if the project meets the guidance or meets the eligibility.’” Pelletier said. “‘Oh, and if we find out two or three years later when we audit you that you didn’t spend the money [properly,] then you’re on the hook for paying it back.’ We [Aroostook County] have no interest in being in that position.”

The compliance manager will oversee the county’s funds — of which about two-thirds will be granted to towns and nongovernmental organizations for projects. This person would also be available to consult on towns’ own ARP funds, though that money comes with significantly fewer limitations.

Aroostook County will foot about two-thirds of the bill for the new hire, while the towns looking to use the County’s services will make up the rest, paying a one-time fee at 2 percent of their local ARP fund allocation.

Twenty-two towns had agreed to participate by July 23, and County Administrator Ryan Pelletier anticipated that five or six more could sign-on soon. Current participants include larger communities like Fort Kent and Madawaska as well as a number of very small towns: New Limerick, Grand Isle and Westmanland. Caribou plans to take up the discussion at its city council meeting on July 26.

Madawaska’s board of selectmen voted unanimously to join the initiative on July 13.

So far, Pelletier said, every town in The County he’s heard back from has ultimately agreed to sign on to the agreement — nobody’s told him no directly, although some never responded. While towns that don’t take part in the project will have equal opportunity to apply for county  ARP funds, having access to the person who oversees compliance makes the projects significantly less risky for the towns and county alike, Pelletier said.

Van Buren is one of the towns that has not responded to Pelletier. Town Manager Nancy Troeger said that she didn’t bring the proposal to the council, because she felt her background in grant writing and implementation suited her to handle compliance by herself.

“I know how much money the town’s going to get and I know what it can be used for,” Troeger said. “They’re asking for 2vpercent, that’s about $4,500 for us out of the $211,000 which may not sound like a lot. But I do paperwork all the time. I’m not worried about doing the compliance checks for our town.”

Other Maine counties have taken similar measures to manage the ARP money, hiring either full-time or consultant positions for the work. Penobscot County hired its recently retired administrator, Bill Collins to consult with towns, NGOs and others applying to use some of the county’s funds. York County also hired someone for a position it’s calling the American Rescue Plan fund administrator to start in early August.

By the time Aroostook County’s application portal closed last week, eight people had applied for the position. Pelletier and other county staff are in the midst of whittling down the field to present options to the county commissioners at their next meeting in August. He’s hoping to hire someone in early or mid-September.

High pressure to the east and and trough to the west will place the region in an area of southerly flow today, which will draw increasingly moist air into the region.
Our Sponsors END_OF_DOCUMENT_TOKEN_TO_BE_REPLACED