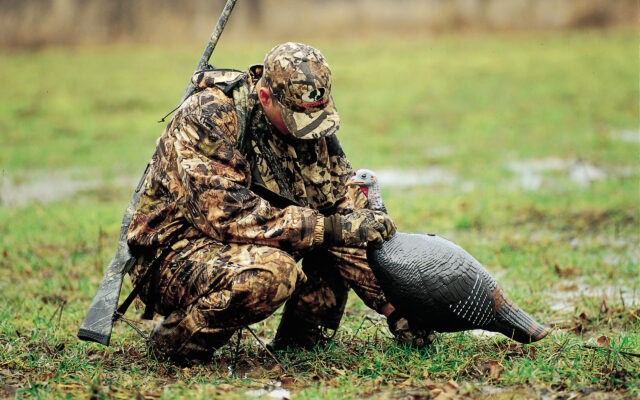 Time for the spring turkey hunt

Bill Graves, Special to the Fiddlehead Focus • May 18, 2021
No, it’s not November and time for Thanksgiving dinner; but it is time for the spring hunt that may supply the tasty main course ingredient for that special meal.

No, it’s not November and time for Thanksgiving dinner, but it is time for the spring hunt that may supply the tasty main course ingredient for that special meal.

Fifteen years ago southern Maine was inundated with wild turkey, they were considered pests by many dairy farmers, but not a gobbler could be seen in Aroostook.  A few birds were captured and relocated to Crown of Maine locations in 2007. By 2014 a total of 166 turkeys had been transferred and released, and with good survival rates, propagation and expansion a limited season was allowed.

Fast forward seven more years to now, and local hunters can enjoy not only a spring turkey season in zones 1 through 6 but a fall season in zone 6 as well. Youth day was May 1, and all hunters can try to bag a bearded turkey throughout May and until day’s end on June 5. Shooters can choose to use a shotgun, crossbow or bow and arrow. Shotguns gauges 20, 16, 12, and 10 must use size 4 or 6 pellets or mixed loads with shot sizes 4 through 7. Using a 28 or .410 gauge is also legal when shells are loaded with size 7 to 9 tungsten super shot (TSS).

Hunters need a valid small or big game license as well as a turkey permit. Sportsmen who are 70 or older and have paid $8 for a lifetime license need purchase no other tags or permits to participate. Turkeys must be tagged before transportation and registered within 18 hours at a game inspection station. For some landowners and family members, it is legal to hunt your own land without a permit if certain criteria are met, check a law book for specifics. 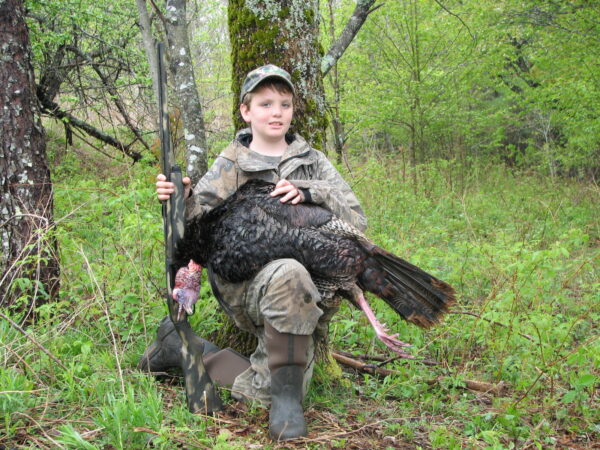 Turkey hunting is a wonderful outing to share with young sportsmen and women, Brian Horr managed to bag a Tom that seems almost half his size. (Courtesy of Bill Graves)

Most regional outdoorsmen, especially waterfowl hunters, will already own much of the gear to successfully pursue wild turkey, but there are a few specialty items that need to be purchased. Beyond the requisite shotgun and shells or archery gear and camo clothing, the primary hunting aid will be a decoy. Without a realistic fake turkey or two, getting a real bird into shotgun range will be unlikely, and random at best. Usually one or two hen decoys are set out to coax a tom into an amorous approach; it also works setting up a hen decoy and a jake, which is a young male. Often a big tom turkey will come running to scare the jake off and claim the female as a mate.

It’s possible to purchase a turkey decoy for a little as $25, but the more elaborate and realistic models made from the sturdiest, long lasting materials can be upwards of 200 bucks! There are also multi bird combo kits available offering different poses of hens, jakes and toms. A little shopping will pinpoint a decoy in your price range that will be effective.

Just as important as a realistic decoy, a turkey call will be needed to attract a real gobbler to the decoy. There are several styles of turkey calls, with various prices and a wide range of ease of operation. Diaphragm mouth calls are the most realistic but require a fair amount of practice; slate pad and striker combos are effective and popular and the simple-to-use box call offers great sound and ease of use.

Rookies to turkey hunting might want to consider one of the handheld shaker, tube or push-button container calls that produce hen calls by simply rotating or moving its position with one hand. The most dependable calls, and most expensive, are battery-operated electronic devices that amplify a variety of recorded, real hen and tom calls at the push of a button. There’s a calling option for hunters of all experience levels; it’s a choice of how hands-on you like to be and your skill level.

Most shooters simply hide in the bushes and brush along a field edge for cover, and perhaps trim a few limbs to open a shooting lane. A piece of camo material to clip to the brush helps break up a hunter’s silhouette and hide slight movements. Archers who need a bit more movement to prepare to shoot, and shotgunners who want full 360 degree sight and shooting lanes often use pop-up blinds set right out in a field. These quick set-up hides offer protection from bugs, rain, wind as well as shielding any motion from sharp-eyed gobblers.

Although not “must have” gear, for comfort, convenience and more accurate shooting, an extra-full turkey choke for the shotgun, a multi-pocket camo vest for calls, tools, shells, range finders, compact binoculars and other useful paraphernalia, and a thick seat cushion or folding hunting seat all make long sit, wait and watch outings more tolerable. A thermos and weatherproof snack box aren’t a bad idea either.

Scouting is by far the most important aspect of a successful turkey hunt. Locate birds, pinpoint where they feed regularly, their travel trails and most importantly where they roost at night. Once roost trees are found, hunters can set up decoys, and a blind in a nearby feed field and begin calling to the turkeys as soon as they fly down in the mornings. With a bit of luck a Tom can be coaxed into shooting range.

More and more regional sportsmen are becoming aware and taking advantage of the spring season for Maine’s largest game bird. While overcrowding isn’t a problem yet, thanks to diverse distribution of the turkey flocks, it’s best to have scouted a couple of spots and have a backup site in mind. Extra caution must be used to identify live birds from decoys. Some hunters use sneak-and-peek tactics to get a shot, and to mistake a very realistic decoy for a real bird would be bad. Worse if the call you hear is actually another hunter and your pellets hit the decoy and the hidden hunter in the brush line behind the decoy! Such situations are not uncommon, take care and know your target.

Spring hunting options are scarce, and bagging and tagging a big Tom turkey is a real challenge and exciting accomplishment. Weather and hunting conditions will improve as the month progresses so get your new license and turkey tag and go after the main course for Thanksgiving dinner.

Maine’s longest serving legislator, Martin was first elected to the Maine House of Representatives in 1964 when he was 23.
Our Sponsors END_OF_DOCUMENT_TOKEN_TO_BE_REPLACED