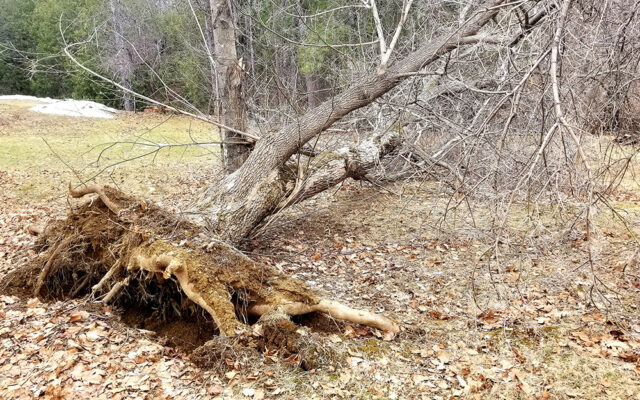 May is a good time to repair winter yard damage

Joseph Cyr • April 23, 2021
The signs of spring are slowly popping up in Aroostook County, as the mountains of snow in people’s yards are starting to give way to a muddy, mucky mess.

HOULTON, Maine — The signs of spring are slowly popping up in Aroostook County, as the mountains of snow in people’s yards are starting to give way to a muddy, mucky mess.

Although many might have the urge to start raking up a winter’s worth of dirt and debris in their yards, caution may be the best approach.Tackling yard work too soon could ultimately lead to bigger expenses down the road from ruined lawns, according to Raymond Jay of Ray’s Tree Service in Houlton.

“As early as you can walk in your yard safely, it is a good idea to first do a quick inspection of your property,” Jay said. “As soon as the soil is workable, typically in the month of May, that is a great time to start fixing any problems brought on by the winter.”

People should also avoid driving vehicles onto their yards to clean up debris until May at the earliest, he advised. Otherwise significant damage could be done to the lawn from the weight of the vehicle sinking into the damp soil.

The overall amount of snow may have been down this past winter, but Aroostook County did have a number of large storms, which brought a bad combination of high winds and heavy, wet snow to the area.

Storms of this nature often yield an unpleasant side effect — downed trees or broken limbs.

“In the winter, when the snow is heavy and you get a lot of wind, we see a lot more trees coming down in people’s yards,” Jay said. “Whenever wind gusts reach 50-60 miles per hour, that’s when things can get bad.”

Jay said from January on, he has responded to a number of calls from people stating that trees or large limbs fell in their yards. An unusually dry summer and fall in 2020 likely contributed a major role in the number of downed trees, Jay added.

“The dry weather had a negative impact on the root systems of many trees,” he said. “We have seen a lot of trees this spring that came up by the roots from the heavy snow and high winds.”

In addition, Jay said he has discovered a number of trees affected with blight.

“What happens is the roots search for water, but last summer and fall there was not much to be had,” he explained. “When that happens the roots get burned, especially with spruce, pine and fir trees, as the roots are closer to the surface.”

Trees and cedar hedges affected by blight may have a bright orange appearance, which is an indication of distress. Jay suggested homeowners do a visual inspection of the trees and hedges on their properties as soon as the ground conditions warrant.

“If you see a problem, call an arborist or someone with the Maine Forest Service,” he said. “Sometimes, in the early spring, using fertilizer spikes can go a long way in helping a tree thrive.”

A broad area of low pressure crossing the state will bring widespread rainfall to the entire SJV today and tonight. Rain tapers to showers Thursday morning with showers lingering into the evening hours as the low lifts to the northeast.
Our Sponsors END_OF_DOCUMENT_TOKEN_TO_BE_REPLACED