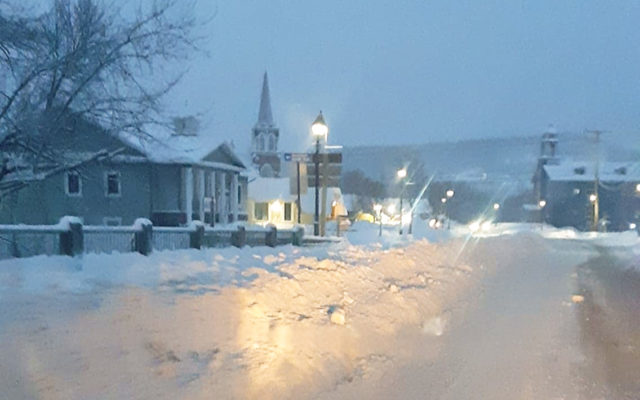 Melissa Lizotte • February 3, 2021
Even with the latest storm dropping close to or more than a foot of snow for much of Aroostook County on Tuesday, the region still is seeing a lower than average snowfall total for the winter season thus far.

AROOSTOOK COUNTY, Maine — Even with the latest storm dropping close to or more than a foot of snow for much of Aroostook County on Tuesday, the region still is seeing a lower than average snowfall total for the winter season thus far.

The storm that dumped snow throughout the northeast and Maine Tuesday brought around 15 inches to the St. John Valley, while other areas reported snow totals of 10.5 inches in Caribou, 9.5 inches in Presque Isle and 6.8 inches in Houlton, according to the National Weather Service in Caribou.

The lower snow totals in central Aroostook occurred partly due to sleet that fell overnight on Tuesday, which weighed down and compacted much of the snow that had already fallen, NWS meteorologist Greg Cornwell said. NWS has not received reports on the exact amount of sleet that fell in and around Presque Isle.

Tuesday’s storm brings the total amount of snow for the 2020-2021 winter season to 57.6 inches for the Caribou region, where NWS is located, well below the total of 72 inches at this same time last winter.

Cornwell said that higher than normal temperatures might be contributing to the lesser amount of snow being recorded.

“Typically, when you have warmer temperatures the snow is not as fluffy and tends to compact more. That leads to a lower depth being measured, which we call a low snow ratio,” Cornwell said. “Higher snow ratios are found with lower temperatures, but we experienced a lower snow ratio in January.”

In January, Caribou’s average temperature was 19.6 degrees Fahrenheit, well above the normal average of 10.2 degrees. The snowfall that month came in at 13 inches, below the normal of 25.2 inches.

The next snow system being monitored by NWS is likely to bring three to four inches of snow to Aroostook County Friday evening, with a possible mix of snow and rain in southern areas of The County, Cornwell said.

Canadian high pressure building down from the northwest sends us some more frigid air for the late week period.
Crown Politics END_OF_DOCUMENT_TOKEN_TO_BE_REPLACED

Three candidates are vying for two seats on the Fort Kent Town Council. Voters will decide which of the three -- Corey Pelletier, Brandon Dayton or Andrew Caron -- will get a seat during the town’s annual election on Monday, March 22.
Our Sponsors END_OF_DOCUMENT_TOKEN_TO_BE_REPLACED