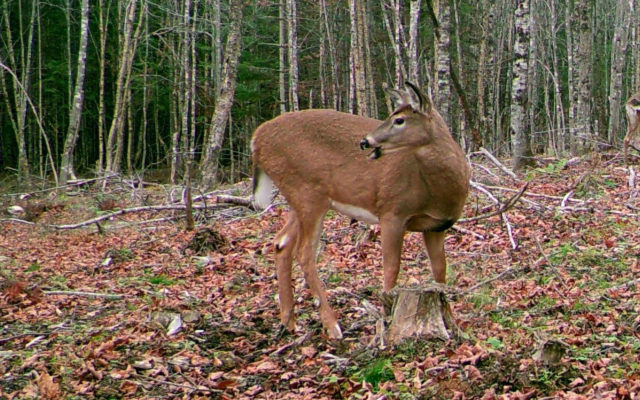 Bill Graves, Special to the Fiddlehead Focus • November 20, 2020
For most Aroostook deer hunters, pursuing bucks offers a solitary, self-satisfying venture. Tagging a big deer requires perseverance and skill, and a bit of luck doesn’t hurt either, especially if venison ends up in the freezer.

For most Aroostook deer hunters, pursuing bucks offers a solitary, self-satisfying venture. Tagging a big deer requires perseverance and skill, and a bit of luck doesn’t hurt either, especially if venison ends up in the freezer.

Whether a hunter is sitting on stand, still hunting thick woods or tracking on fresh snow, stealth and silence remain crucial. At least that’s what most experienced hunters will preach, but during the rut, a different approach often works, and it involves making some noise to coax deer to the shooter.

During the rut, bucks become lovesick and somewhat less cautious, which may often work in the hunter’s favor. Seeking out a doe in heat keeps male whitetails on the move steadily and it becomes possible for hunters to stake out a likely rub, scrape or well-traveled trail to intercept amorous traveling bucks. Make a fake scrape or a drip site with one of the many effective doe-scent estrous solutions, and with a bit of breeze the males will come to you. Add sound effects to imitate a couple of other bucks fighting over a hot doe, and any other nearby buck within hearing range will likely investigate.

Antler rattling imitates sparring bucks and has been used for years out West, especially Texas, with consistent results. Over the last decade or so, Maine hunters have begun using the tactic during late November and been rewarded with some trophy deer.

It’s fairly simple. Cut off a set of real antlers at the base, join them together with a rawhide thong for ease of transport and to prevent loss and take them to a tree stand or ground blind in good whitetail cover.

Once in place, grab the antlers by the bases and mash, clash and smash the tines together loudly at intermittent periods for about five minutes and rake nearby brush and limbs. Wait a few minutes and repeat the fake antler duel, then watch and listen for an interested horned interloper. One warning: wear gloves and pay attention to the antler position as you rattle. Many a hunter has scraped or gored their own hand when overzealous. Also have your rifle ready and near. On many occasions a buck will come running into sight, ready to join the battle. 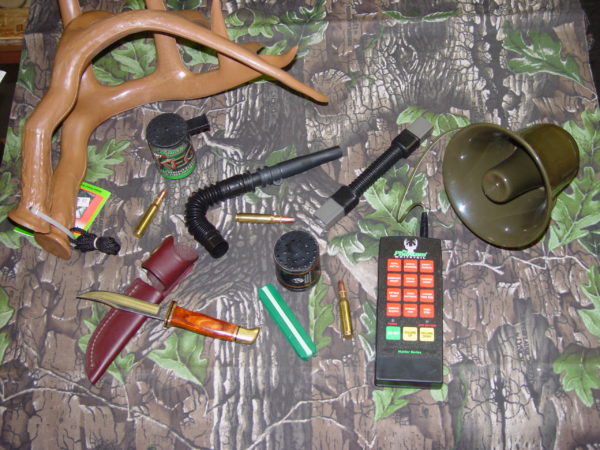 A wide array of calls and scents is available at most area rod and gun shops. Shown are a few items that improve the odds of bagging a buck. (Courtesy of Bill Graves)

Several companies sell fake antlers, more lightweight and synthetic, with even better sound quality than the real things. Also effective and simple to use, even one-handed, are a couple of mechanical devices that realistically simulate horns rattling when shaken. Check out Rattle Bag, Battle Bag, Primos Rack and Roll and Bag-O Bones, to name a few brands. They are inexpensive and effective.

Whitetail bucks are alert, cautious and wily game animals, but curiosity can often be their downfall.  Over the years, deer hunters have groaned, grunted, bleated, blatted and whistled to stop a walking or running buck. Many sportsmen also use calls during the rattling process to give a more realistic sound to the imitation buck tussles. Wildlife researchers at the University of Georgia published a paper in 1988 verifying that they had identified and recorded 400 different vocalizations of whitetail deer. It follows that if a hunter could imitate some of those sounds, the chances of fooling a buck into shooting range would improve greatly.

Call manufacturers have been busy since this revelation, and as a result a wide range of deer calls is available and proven not only effective but essential. The trick is to learn the language. One sound will lure a buck to your stand, while another variation will chase him away. Tone, level and inflection are all important sound adjustments the call makers include and the hunter must learn. 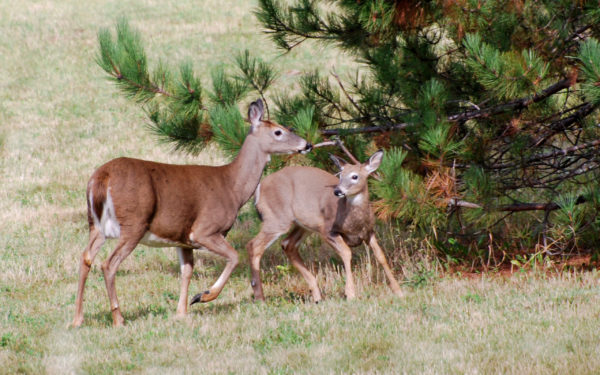 This duo of deer make a fast departure from a pasture when a bleat from an electronic deer call stops them in their tracks. (Courtesy of BIll Graves)

All deer bleat, but fawns make the sound more frequently, especially when communicating with does. When a buck hears the bleating, he will often think a group of deer are nearby and that means several females. Perhaps one of them will be in heat, so the buck will investigate. If a deer decoy is being used in conjunction with the call, the effectiveness increases substantially. A bleat call is particularly productive when rattling, and is effective all season long, making it the most versatile deer call.

A dominant buck call is a deep, resonant grunt. During the height of rut, bucks are very aggressive and looking for a fight. Using a dominant grunt call will often bring another mature buck running, ready to fight. This call will send yearlings and small males away, since they aren’t the least bit anxious to lock horns with a dominant buck. Grunt tubes that produce this sound are easy to use.

When a buck is with a doe in estrus and other bucks are around, that buck, known as the tending or dominant buck, will issue a tending grunt. This deep grunt lasts for a minute or longer, warning other males to stay clear. The sound is actually a series of very short, rapid grunts with little break in between.

To another buck, a tending grunt tells him a receptive doe is near, and perhaps he can out-duel the buck with her. Bucks nearly always investigate tending grunts, and with the proper use of doe scent, a buck will almost walk in on a well-hidden hunter.

There are dozens of other deer vocalizations that can benefit an outdoorsman, but these are three of the most popular and simplest to master. During the last week of regular season and the upcoming black powder deer season, a hunter’s success may increase if he learns to talk to the animals.

Mostly cloudy skies are expected across Fort Kent today. Clouds will thicken this afternoon as an area of low pressure quickly moves east from the Great Lakes and crosses Maine tonight then heads into the Maritimes Thursday morning.
Our Sponsors END_OF_DOCUMENT_TOKEN_TO_BE_REPLACED