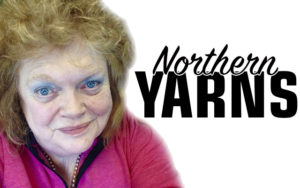 Never miss the chance to share a good story

Belinda Ouellette, Special to the Fiddlehead Focus • November 18, 2020
Even though Halloween is over for another year, this story stays with me.

Even though Halloween is over for another year, this story stays with me.

I have always liked Halloween — chocolate candy, silky costumes, lavish wigs, flashy makeup and an abundance of tiny princesses and superheroes who knock at our doors and tug at our hearts.  Trick-or-treating was much more prevalent when I was a child.  It was common to see the streets flooded with costumed children and cautious parents. My own dad and I were avid Halloween trick-or-treaters.  We would walk together, one of my hands safely buried in his while the other hand clutched a lighted pumpkin.

It was 1976 and I was “tooling around” in my father’s injured Ford Ranchero, accompanied by my dear friend, Cindy.  Of course we were too old to trick-or-treat but we were still young enough to be totally enthralled with the energy of the night.  We had just turned onto York Street, when a gaggle of tiny characters crossed in front of us.  I stopped the car, more than happy to watch the parade, when he stepped forward.

He was the classic Grim Reaper: tall, hooded and ominous.  His cape was electric blue velvet and in his left hand he held onto a sharp, gleaming scythe.  Behind him, ghosts and mini witches continued to cross; apparently oblivious to the horrifying figure before us.

He walked over to the driver’s side of the car, where I sat crumbling behind the wheel.  With one easy movement, he crouched down, tapping the driver’s side window with that gnarled, distorted finger while I sat there mesmerized.  Slowly, my mouth agape, I rolled the window down.  With one flip of his head, the shocking blue hood fell to his shoulders, exposing a baseball cap and a grin.

“You girls can go on, now.  I am just out here to watch over these kids and make sure nobody gets hit by a car.  Have a great night, ladies.  Happy Halloween!”

And with that, he rose to his feet, pulled the hood back up over his head and stepped out of the way, one hand tapping the side of the car while the other hand clutched what I now know to be a rubber scythe.  A ballerina in a hot pink tutu shot out of nowhere and tugged on the Reaper’s robe.

“Hurry up, Dad!”  Her little girl’s voice was a soothing reality check.  “The big white house is handing out treat bags with chocolate bars.”

The reaper straightened out his robe and took a deep breath, looking back at me and Cindy with a wink.  “Will this night ever end?” he asked.

He slipped away from us then, his slick, dark cape lost in a sea of vivid colors, high pitched squeals and the magic of youth.  That terrifying Grim Reaper was a young father, watching over his children on a dark and busy street.

I still love to “tool around” York Street on Halloween evening.  These days, I am a passenger in a much nicer vehicle than that old beloved Ford Ranchero.  My husband would drive slowly and cautiously amid the new generation of little goblins and my fingers are entwined in the soft, curly hair of a Goldendoodle.  Just beyond the edge of that dimly lit street, a flash of brilliant blue weaves in and out of the shadows and I shiver ever so slightly; lost in the memory of that night.

Belinda Ouellette lives in Caribou with her Goldendoodle, Barney.  You may email her at belindaouellette9@gmail.com.

Mostly cloudy skies are expected across Fort Kent today. Clouds will thicken this afternoon as an area of low pressure quickly moves east from the Great Lakes and crosses Maine tonight then heads into the Maritimes Thursday morning.
Our Sponsors END_OF_DOCUMENT_TOKEN_TO_BE_REPLACED