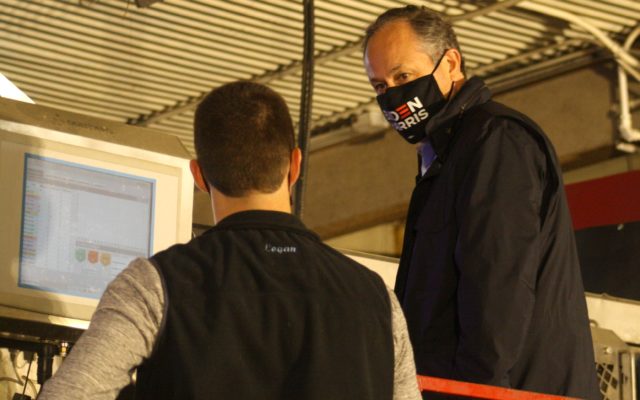 Emhoff toured the Lundeen Potato Facility in Mars Hill and spoke at a get-out-the-vote rally at Farm Park in Fort Fairfield to help the Biden-Harris ticket win Maine’s toss-up 2nd Congressional District. Both events were invitation-only to decrease the potential spread of COVID-19.

Emhoff, who was introduced by Senate President Sen. Troy Jackson, D-Allagash, touted the Biden-Harris ticket, but also tailored remarks to his County audience, making several local references and focusing on rural issues, such as broadband and health care.

He directly quoted John F. Kennedy’s address at Presque Isle Airport in 1960 and touted the Lundeen Potato Facility in Mars Hill as a symbol of Maine’s success. Emhoff called the sights across Aroostook County “beautiful,” saying it brought him back to his boyhood trips to Maine. 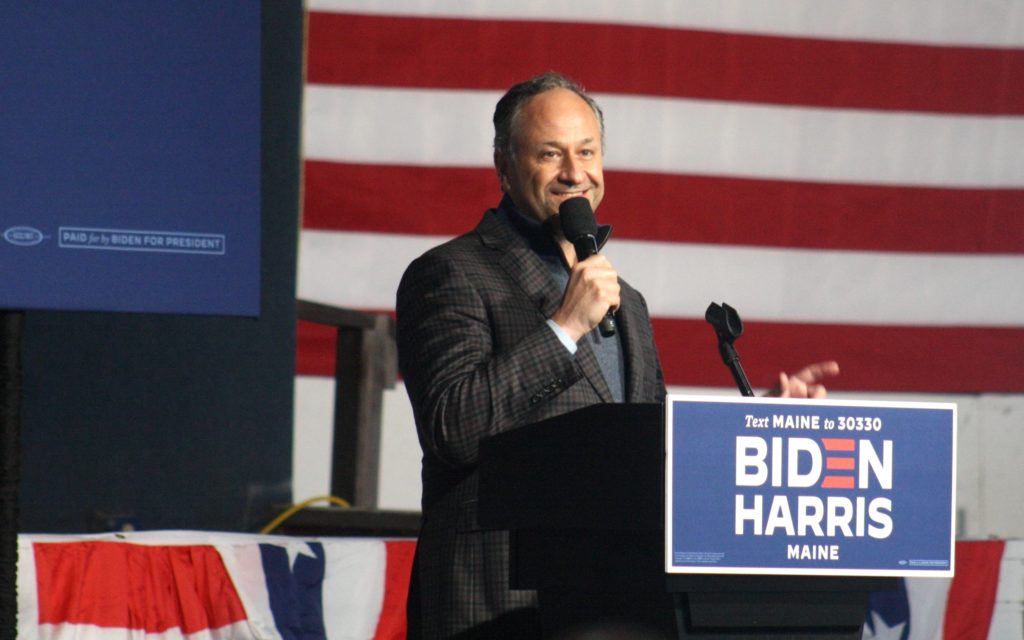 Emhoff’s central message was clear: vote for Biden-Harris to end the wrongs of President Donald Trump’s administration, whether it be on COVID-19, health care or climate change.

He also praised the characters of Harris and Biden.

“I think you all know by now that I love Kamala Harris,” Emhoff said. “I gotta tell you something: I love Joe Biden too. That man is competitive, smart, competent, and he’s ready to lead.”

Emhoff gave his strongest statement as he noted the importance of winning Maine. He said the Biden-Harris ticket needed to make Biden’s victory lopsided enough to prevent Trump from contesting the election’s results.

“We want to show (Donald Trump) that we are going to win so big that, no matter what he does or says, he’s not going to be able to refute it,” Emhoff said.

If Democratic nominee Joe Biden wins the presidency on Nov. 3, Emhoff will become the nation’s first “second gentleman.” While vice presidential spouses tend to have understated roles, they often use the position to focus on chosen issues.

Emhoff said after the event that if the Biden-Harris ticket was elected, he would do what he could to help the country face the COVID-19 pandemic and what he described as four years of divisive policies under Trump.

Emhoff said one issue he is passionate about is lawyers providing pro bono legal services to those unable to afford them, hinting that he would promote such work in his new role.

Nearly 80 people attended Emhoff’s rally in Fort Fairfield, all of whom were wearing masks. The United States Secret Service escorted Emhoff across The County, as did the Maine State Police.

Emhoff — who previously represented entertainment and sports figures as a lawyer — married Harris in 2014. Since Biden named Harris his running mate in August, he has become an ardent supporter of the Biden-Harris campaign, amassing a wide following on Twitter.

His appearance in a sparsely populated part of Maine owes itself to the state’s unique method of choosing the president.

In 48 of the 50 states and Washington, D.C., the candidate who receives the most votes in the state or district gets all of its electoral votes. But Maine’s four electoral votes are allocated differently: two votes go to the winner of the entire state, while each of the winners of the state’s two congressional districts gets one vote. Nebraska is the only other state to divide its electoral college votes this way.

While Biden is widely expected to win Maine’s statewide vote and the Portland-based 1st Congressional District, the outcome in the 2nd Congressional District — which contains Aroostook County as well as Bangor — is up in the air. As of Saturday, polling analysis site FiveThirtyEight had both Republican candidate Donald Trump and Biden at a 50 percent chance of winning the district, tying it with Georgia as this election’s biggest toss-up.

In 2016, 55 percent of Aroostook County voted for Trump, with Trump’s 6,000-strong victory margin in the County making up a sizable chunk of his 36,000-vote margin in the congressional district.

While Biden voted for NAFTA as a senator in 1993, he has backed off from supporting the deal in recent years.

A ridge of Arctic air will build into the Valley today with temperatures only reaching around 0 degrees for a high in Fort Kent and falling into the minus-25- to minus-30-degree range tonight across northern Maine.
Crown Politics END_OF_DOCUMENT_TOKEN_TO_BE_REPLACED

Three candidates are vying for two seats on the Fort Kent Town Council. Voters will decide which of the three -- Corey Pelletier, Brandon Dayton or Andrew Caron -- will get a seat during the town’s annual election on Monday, March 22.
Our Sponsors END_OF_DOCUMENT_TOKEN_TO_BE_REPLACED