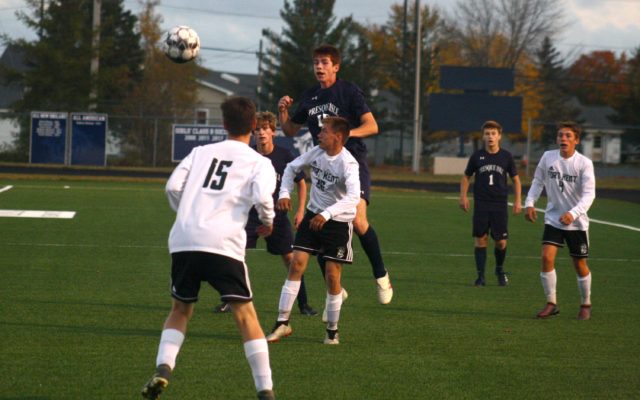 While Fort Kent played better in the second half, the Warriors consistently struggled to get in good scoring position. Their players had a combined six shots, but none of them got past McAtee.

The Wildcats scored twice on Warriors goalie Ethan Bouley in the first half — one with 32 minutes left and the next 19 minutes later. However, Bouley shut out Presque Isle for the entire second half.

Practically everybody in attendance wore masks as they watched the game from bleachers and chairs. The district required masks for attendees unless they had a medical condition prohibiting them from wearing one.

Wildcats coach Tim McCue said his team had played tough against a formidable opponent and praised his squad’s abilities after the game.

“They’re quick, they’re tactical,” McCue said. “Our guys stood up to the challenge.”

McCue — who has coached the Wildcats since last year — said this team stood out to him because it has several players who were ready to learn new skills and to compete as strongly as they can on the field.

Warriors coach Kalusha Kotes said his team had played far better in the second half than the first. He said the Warriors would work on fundamentals before they play their next match.

“It’s a learning process for us,” Kotes said. “Coming here and losing this makes us realize our weaknesses, as well as our strengths.”

A weak disturbance will drop down from the northwest tonight triggering some snow showers across Fort Kent and vicinity as it moves through with no significant accumulation expected.
Our Sponsors END_OF_DOCUMENT_TOKEN_TO_BE_REPLACED