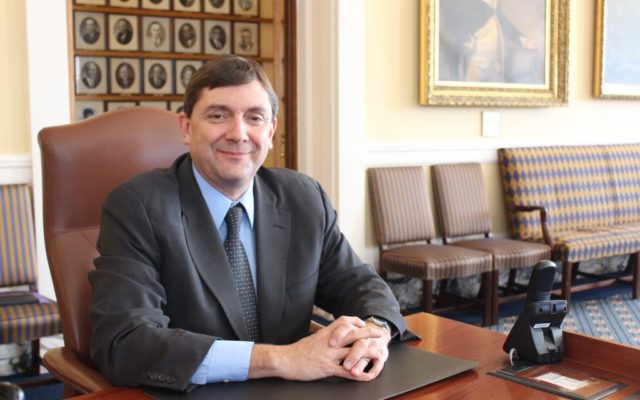 Partisan games prevent the Legislature from finishing our work

Sen. Troy Jackson, D-Allagash • August 26, 2020
In logging, you don’t get paid for doing half of the job. You also don’t get to pick and choose what parts of the job you want to do and still get paid.

In logging, you don’t get paid for doing half of the job. You also don’t get to pick and choose what parts of the job you want to do and still get paid. The same should be true for the Maine Legislature. Right now, legislative Republicans are standing in the way of the Legislature returning to Augusta to finish their job.

Back in March, Democrats and Republicans made the difficult decision to temporarily suspend the Legislature to respond to the COVID-19 pandemic. For me, it was a really tough call. We still had a lot left to do for Maine people, from making sure people could afford their medication to supporting Maine businesses and good-paying jobs. It was hard to leave that work unfinished, including “Buy American” legislation, a bill to protect Maine trucking jobs, and a measure from Sen. Mike Carpenter, D-Houlton, to establish a Veterans Bill of Rights. However, after watching the COVID-19 virus leave a trail of death and destruction in Italy and New York, I knew adjourning was the right call to save lives.

The plan was always to finish our work when reconvening the Legislature was no longer a threat to public health. While the COVID-19 virus continues to make devastating waves in other parts of the country, particularly in the South, the data suggest that the tide is finally turning in Maine. The number of new COVID-19 cases each week is beginning to decrease. Compared to the rest of the country, Maine has a low number of COVID-19 cases per capita. And hospitalizations have declined. All signs suggest that the time to reconvene is now. Unfortunately, my Republican colleagues disagree.

For months, my Republican colleagues have publicly called for the Legislature to return to Augusta to remove the governor’s emergency powers during the height of the pandemic. But when their vote would have made a difference, most Republicans refused to participate in a public vote — not once but twice. The Senate president and speaker of the House can only reconvene the Legislature if a majority of Democrats and Republicans agree to come back. By refusing to vote, legislative Republicans effectively blocked a special session.

To say I’m disappointed would be a profound understatement. It shouldn’t be pulling teeth for lawmakers to finish their work. When Republicans called for the Legislature to reconvene while Maine was recording new deaths every day and battling COVID-19 outbreaks in nursing homes, I thought it would do much more harm than good — especially if the goal was to strip the governor of emergency powers. But I understood their frustration. Mainers are facing unprecedented challenges. The stories I’ve heard from my own constituents have been heartbreaking.

It just didn’t seem right to reconvene to risk spreading the virus from hotspots like Cumberland County to Aroostook County. We couldn’t afford to jeopardize the health of our people, prolong the closure of small businesses or overwhelm our frontline workers, first responders and health care professionals, who are already stretched thin. We also couldn’t afford to remove the governor’s emergency powers, which have allowed Maine to access personal protective equipment and dramatically expand COVID-19 testing. The truth is these emergency powers are what has allowed our state to get a better handle on the virus and reopen our economy sooner.

As we headed into August, Maine was in a better position to reconvene the Legislature. This pandemic has caused a lot of hardship for families and small businesses in our communities. The bipartisan committee work made a special session seem promising – 75 percent of the bills had bipartisan votes. Rather than pick and choose an agenda for any sort of special session behind closed doors, we were narrowing the scope 2-3 day special session in a public and collaborative way. It’s why I voted twice for a special session. I only wish my Republican colleagues did the same.

Given the rapid spread of the virus in the South, it would be naive to think that Maine isn’t vulnerable to a resurgence. We didn’t want to increase that risk, especially as kids head back to school. But at the end of the day, a majority of my Republican colleagues were unwilling to put partisanship aside and join us to reconvene the Legislature. While I’m disappointed in the outcome, I’m still working in our community doing everything I can to support Maine people and small businesses through this crisis.

Post-tropical cyclone Teddy is expected to cross Nova Scotia today and skirt the western shores of Newfoundland. Maine will experience little moisture from the storm.
Our Sponsors END_OF_DOCUMENT_TOKEN_TO_BE_REPLACED