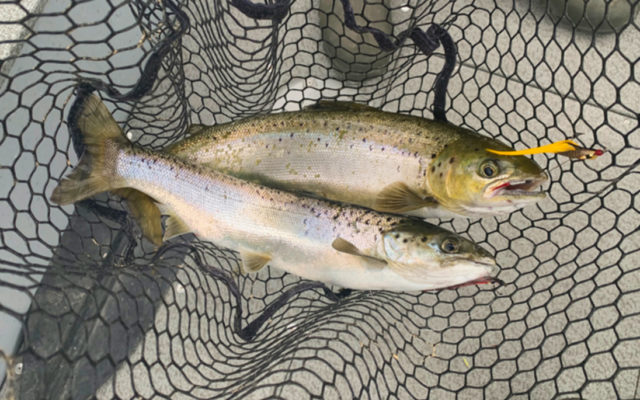 Bill Graves, Special to the Fiddlehead Focus • June 18, 2020
As years pass and outdoor ventures accumulate, most older sportsmen undergo a change in the personal rewards and requirements of each outing.

As years pass and outdoor ventures accumulate, most older sportsmen undergo a change in the personal rewards and requirements of each outing. It’s no longer necessary to catch a limit of fish; most are now released, and to fool one, large, bragging-size beauty is far better than a dozen average ones. Small deer, bear and moose are passed up in favor of a larger, older animal, or some outings none at all with no regret.

Introducing a rookie to a new cast or blast pastime takes on a greater importance. Mentoring a grandchild, niece or nephew or neighborhood youngster with no outdoorsmen in the family ensures heritage is carried on. It’s almost like life has slowed down, allowing the picturesque beauty, sights, smells and sounds to become more evident and comforting. My wise Dad stated that after the age of 60, “The days are long but the years are short. Appreciate every one, it’s a luxury denied to many.”

For myself, and many other experienced (meaning older) anglers and huntsmen, we now get the most enjoyment when a truly unique or special event occurs during a woods or water venture. Whether it has feathers, fins or fur, bagging a truly large specimen is always exciting, as is shooting an albino or even a semi-white animal, a doe with antlers, or a rare species of duck or goose. Downing three birds with three shots or two birds on the wing with one shot, having a bird or squirrel settle on your shoulder while sitting silently in a tree stand, or having a black bear climb your stand to check you out is worth a page in the diary.

Viewing two moose, whitetail bucks or tom turkey get into a head-to-head tussle is something you’ll never forget. Sometimes there’s sudden surprise and eventual humor; I watched a bass fishing companion go to sit on a boat gunnel to change a lure and keep right on going into a back somersault into the lake. Another buddy was sitting backwards on a canoe bow, guiding us downriver, when we hit a submerged rock — into the drink he went. To my total amazement, I watched another pal make a cast and throw his rod, reel and lure into the middle of a river.

All of these antics lead up to the fact that a week ago I actually got to experience one of those events myself. If every outing I enjoy for the rest of the year is mundane, I’ll still be a happy camper. About 25 years ago or so I visited Montana to fish its famous rivers and lakes for rainbow, brown and cutthroat trout. We used drift boats and float tubes and the guides rigged our rods to fish two flies. A shorter length of leader was tied into the center of our main leader so some dual combination of dry fly, wet fly and nymph could be presented and a small, colorful foam strike indicator helped signal a strike on the submerged fly.

Returning to Aroostook, I decided to invent my own two-fly system, especially for spring trolling. Tandem streamer flies tend to be either a bait fish imitation or colorful attractor pattern, and to further confuse choices among hundreds of each style, some are feather wing, others fur or hair wing and a bunch combine both materials. What particular pattern will work daily is a quandary, but offering two per fly line ups the odds.

I use a three-way swivel and attach it to my trolling line and a 4-foot leader. To the second eye I tie on a 12- to 14-foot length of 8-pound test leader material and a 6-foot section of leader goes in the third swivel eye. I crimp a split shot round sinker the size of a pencil eraser halfway up the short leader. This allows that fly to run several inches deeper and helps prevent the two leaders from tangling easily. 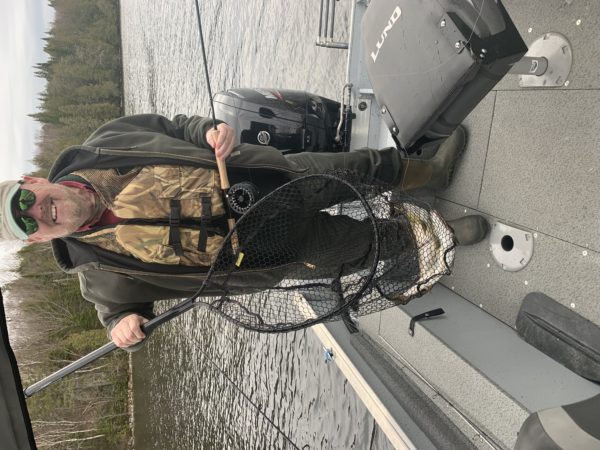 Even after more than half a century of fishing, it’s possible to experience a new and are event. Writer Bill Graves displays his two salmon caught on two flies on one rod this spring. (Bill Graves)

To begin each trolling trip, I fish a bright attractor fly on the long line and a smelt imitation on the shorter leader. My theory is that a fish will see the vibrant colored pattern and investigate, and if it refuses that one it might grab the bait-fish-imitating fly. More flies in the water means more options, and has certainly produced more fish for me over the years. Two weeks ago it really paid off; remember the rare events that make a lifetime memory? This is what happened.

My brother-in-law and I had been trolling Long Lake for about two hours. We had a 17-inch trout and a 16-inch salmon but action was kind of slow. We were chatting when the strident buzz of line spooling off my fly reel grabbed my attention. As I lunged to pull the rod from the holder the tip was dipping and bouncing like a duck trying to catch a June bug. As I lifted the rod to set the hook and keep the line tight, the fish pulled it right back down. I knew right then I was into a big fish. There was a lot of give and take for the next few minutes until I finally saw the salmon that had grabbed the short leader fly. It was easily 2-1/2 pounds, but smaller than expected, and I wondered if it was foul hooked. As my boat buddy slipped the net under the fish, to our surprise the line suddenly went tight again and a three-pound slab of silver somersaulted skyward right behind the boat.

All questions about the strong fight were answered right then, and for the first time in my long string of fishing adventures I caught two big gamefish at once. I’ll always cherish this rare event. We snapped a couple of photos before releasing the silver leapers. So yeah, an old dog can learn a new trick occasionally, and it’s rare feats like this that should keep all sportsmen motivated.

Consider how perfect events had to be for two fish to each grab a fly at the same time. If either had struck first, the frenzied fight and runs would have kept the other fly away from a second salmon.

If you think you’ve seen it all, think again. There’s a new experience just down the trail.

A large ridge of high pressure centered over the eastern Great Lakes today will bring warm, dry conditions to the Valley through the remainder of the week.
Campaign Corner END_OF_DOCUMENT_TOKEN_TO_BE_REPLACED

Dale Crafts filed his nomination papers for Feb. 21 with the Secretary of State to officially be placed on the primary ballot on June 9, 2020, for the U.S. House of Representatives 2nd District race.
Our Sponsors END_OF_DOCUMENT_TOKEN_TO_BE_REPLACED