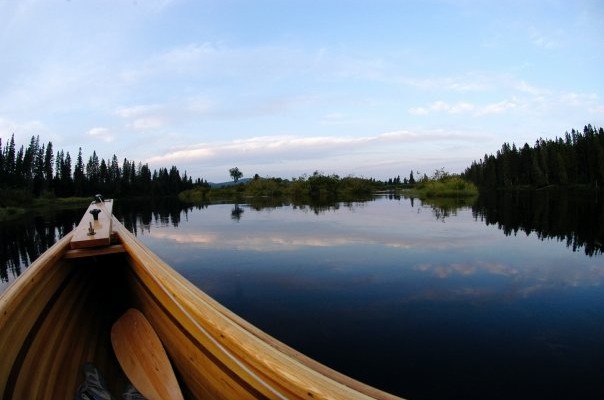 Ruth LaRoche, Special to the Fiddlehead Focus • May 27, 2020
I was twelve when my family moved into the lodge on the western shore of Umsaskis Lake. The lodge set up on a high bank overlooking the lake. My siblings and I would spend the next five summers exploring the outdoors there.

I was twelve when my family moved into the lodge on the western shore of Umsaskis Lake. The lodge set up on a high bank overlooking the lake. My siblings and I would spend the next five summers exploring the outdoors there.

As long as Mama had a general idea of where we were, we were allowed to be free-range kids. We did a fair amount of canoeing, berry-picking, and hiking, but most of my free time in the out-of-doors was spent swimming and fishing off the dock in front of the lodge. We could swim or we could fish, but never at the same time. I now realize that Mama didn’t want to be digging fishhooks out of my younger brothers.

In the first couple of summers, I would worm-dunk with a spin rod. We caught buckets of chubs and snag an occasional brookie. There would be lots of cheering when we caught a trout. We really didn’t care what we caught. We just loved to fish.

Once in a while, I was asked to accompany Dad on an excursion – usually to Ashland to pick up Park supplies, buy groceries. There was also lots of waiting because at the same time, he made phone calls to the Augusta office from a payphone. But being Dad’s helper for the day had its reward of eating lunch in a restaurant!

I remember one trip with Dad that had a different reward and changed how I wanted to fish forever. He took me with him on a work tour to Eagle Lake. We loaded a canoe, an outboard motor, food, and overnight gear into the truck. We traveled to Churchill Dam to start our water journey. After a while, we arrived at the Eagle Lake Ranger station. Dad and the ranger left to do whatever rangers do, and I got to stay with the ranger’s wife. I helped her with her chores. All the while, she entertained me with stories about her own life. Dad returned for me late in the afternoon, and we made our way back to Churchill Lake.

On the way, Dad thought it would be a good idea to wet a line at Thoroughfare Brook. I had never used a fly rod before, and Dad thought it was time that I learned. I didn’t have to cast very far as the trout were jumping all around us.  Dad said, “Ker-Smash!” every time a trout would bite. It all was exhilarating.  All the fish we caught that night were 12”-14” brook trout. We took our limit down the lake to Camp Arthur and cooked a couple up for our supper. The rest, we brought home to Mama the next day.

After that trip, I began practicing my fly-casting down on the dock. I also became interested in how to tie flies. I got pretty good at making grasshoppers and black ants. Wait a minute…maybe that was Dad’s plan all along. He knew that I had a passion for crafting. Perhaps that’s why he didn’t mind helping me hunt down fly tying supplies on his trips to town. Maybe he figured that I might be able to keep his fly box full.

I received my first fly rod as a graduation gift from my fiancé. And 40 plus years later, he has become my lifetime fishing buddy. I still enjoy fly fishing, but I now leave the fly-tying up to my husband as he is much more scientific about it than I am.  I’ll even let him pick out which fly for me to use as he loves to “match the hatch.”

Dad left this earth far too early at the age of 64. I am forever grateful that he took the time to teach this girl how to fish. And every time that I visit Thoroughfare Brook, it will always be like a little visit with Dad.

Teach a kid to fish. The rewards will last a lifetime.

Written by Ruth LaRoche, for Matt LaRoche, Superintendent of the Allagash Wilderness Waterway, a Registered Maine Guide and an avid outdoorsman. He can be reached at 207-695-2169 or at matt.laroche@maine.gov.

High pressure over western Québec will build into the Valley today and center over the region tonight. The ridge will move east of the region tomorrow with a low pressure area approaching from the west with a cold front.
Our Sponsors END_OF_DOCUMENT_TOKEN_TO_BE_REPLACED