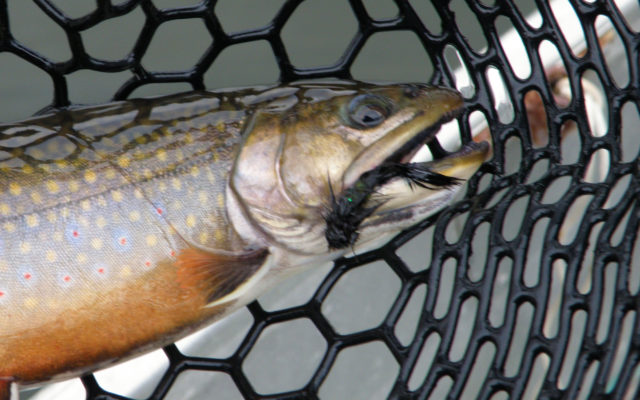 Bill Graves, Special to the Fiddlehead Focus • April 21, 2020
There is one proven tactic that will increase an angler’s odds of putting a bait near more fish and therefore producing more action -- weight.

Aroostook’s first real trout fishing opportunities will be on local rivers and streams since it’s usually early May before the larger lakes clear of ice. Even when the ice leaves the brooks, high, swift and murky debris-filled water conditions make it difficult to find a likely spot to cast a worm or a fly. And even when conditions calm and clear, the waterways are going to remain very cold for a few weeks. It’s the frigid water that makes catching spring trout so challenging.

During freshet conditions, which normally last at least two to three weeks, trout seek out slow, quiet water that’s often somewhat warmer than the main flowage. Coves, bogans, backwaters and eddies hold schools of fish, they spread out near the bottom and wait for current flow to funnel food to them. Trout are a bit lethargic in the cold water and seldom move far or quickly to chase bait, it has to be right in their feeding lane. This is why it often takes dozens and dozens of casts to entice a strike on April outings.

There is one proven tactic that will increase an angler’s odds of putting a bait near more fish and therefore producing more action — weight. Three very specific techniques may be used to get a worm, minnow or fly to move realistically along the stream bed. Lures and spoons are usually heavy enough without extra weight to sink and flutter near bottom. The trick to using weighted baits is a delicate balance to get deep but not catch on bottom structure and break a leader.

The oldest and simplest method to weigh down a bait, especially live bait such as worms, nightcrawlers and minnows, is to attach a sinker to your leader. Using lead sinkers is now illegal, so a non-toxic substitute metal is necessary. Since you want the bait to move realistically, I recommend placing the sinker at least 8 inches from the hook; 12 to 16 inches is my go-to distance. Popular styles of sinker include the torpedo-shaped clamp on, thin strips of wrap-around metal ribbon and my preferred model, the split shot. 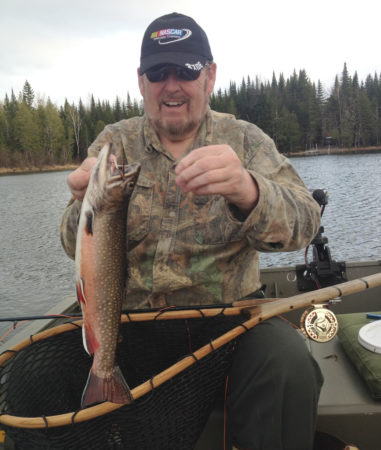 The Magog Smelt Streamer fly the author is about to remove from the brook trout before releasing it has the body wound with weighted wire to help it sink deep and stay near bottom where the fish stay in cold water. (Courtesy of Bill Graves)

All three styles work well for spring dipping and dunking in smaller-sized pools, because each location will have a different depth and current speed so a weight change is often needed for each new spot. A few worm fishermen prefer to use a spinner for weight as well as flash to draw attention to the bait.

Along some pools the water speed will require both a spinner and sinker, especially if you use the very effective style of bottom-bouncing. This bait hop-and-stop style of retrieval allows a sportsman to slowly cover most of a bankside run with good bait exposure.

Attaching a small sinker to the leader is also an effective method of getting a regular streamer fly to run deeper, although casting is a bit of a challenge. This brings us to the second option for sinking your bait, in this case any style of fly; add weight to the hook. For streamers, nymphs, leech and terrestrial fly patterns to be effective, low and slow is a must for spring conditions.

Wire can be wound around the hook shaft and tied or glued in place before the feathers, fur, and other materials are applied. Some patterns use a metal cone or bead head affixed behind the hook’s eye to add weight and offer a realistic shape to the front of the fly. Gold, silver, pearl, and sparkle infused cone heads add flash as well as help the fly run deeper.

The third and final option, more suited to fishermen who would rather cast a fly or stay home, is to use a weighted fly line. Floating fly lines used for summer casting jaunts won’t allow the fly to run deep enough to be in front of the fish, and adding a sinker to the leader helps but impairs casting. The answer is either a full sinking fly line or one of several versions of the “sinking tip” line.

Anglers casting to faster, deeper runs will need full sinking, but I’ve had great luck with a 10- or 20-foot sinking tip and a shorter than normal 6- to 7-foot leader. Since I concentrate on the slower, shallower runs, this combo gets even an unweighted fly near bottom. A few companies even manufacture sinking leaders, but I’ve found these to be overkill on regional streams.

So there you have the “weighty” options on spring stream fishing this month. It’s certainly not consistent action but the trout will strike if you fish ”low and slow,” plus it gets you out the house — and fishermen are the original “social distancing” promoters. Enjoy tight lines and solid footing.

Only one member of Maine’s congressional delegation had come out in favor of impeaching President Donald Trump ahead of House Speaker Nancy Pelosi’s Tuesday announcement that the Democratic-led House of Representatives would begin an impeachment inquiry.
Apex Weather END_OF_DOCUMENT_TOKEN_TO_BE_REPLACED

A strong upper-ridge anchored off the Southeastern US coast will bring warmer and more humid than normal conditions to the Valley through the late week period.
Campaign Corner END_OF_DOCUMENT_TOKEN_TO_BE_REPLACED

Dale Crafts filed his nomination papers for Feb. 21 with the Secretary of State to officially be placed on the primary ballot on June 9, 2020, for the U.S. House of Representatives 2nd District race.
Our Sponsors END_OF_DOCUMENT_TOKEN_TO_BE_REPLACED