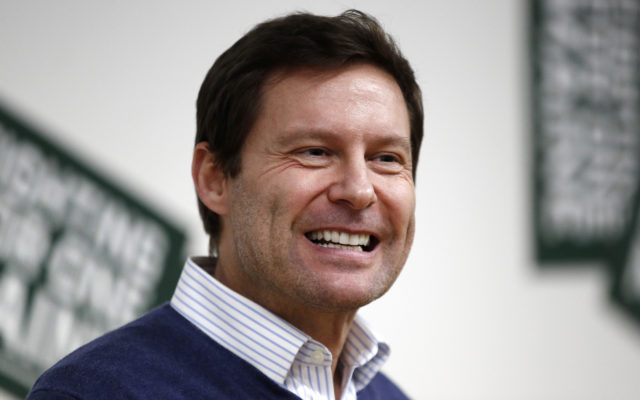 Contributed • March 30, 2020
Ross LaJeunesse released a statement Thursday, March 26, on the status of his campaign for U.S. Senate. He announced his withdrawal from the campaign and the decision to support candidate Sara Gideon.

BIDDEFORD, Maine — Ross LaJeunesse released a statement Thursday, March 26, on the status of his campaign for U.S. Senate. He announced his withdrawal from the campaign and the decision to support candidate Sara Gideon.

“I made the decision to run for U.S. Senate after a lot of thought and many conversations with my husband, Patrick, our family and friends. I knew it would be crucial to have the support of the people most important to us, and the reality is that no candidate ever runs alone. There are campaign staff, volunteers, supporters, and of course family and friends every step of the way.

I am thankful for the love and unwavering support that Patrick and I have received from our parents, our siblings, aunts and uncles and cousins, and especially my two nieces, Eleanor and Maeve. And I am thankful for the many friends, both old and new, who encouraged and helped us.

Some of you know that my family lost my brother, Casey, in a tragic accident almost exactly 12 years ago today, on April 13, 2008. Casey has been an important part of this campaign, also. I’ve thought of him nearly every day, and part of why I ran is actually because of Casey and what he taught me.

After graduating from Maine Maritime Academy, Casey became a world traveler and true adventurer. He lived and worked in Europe, Australia and finally in Africa. He said “yes” as many times as possible during his short life. He didn’t let his decisions be guided by fear.

After he died, I put a quote on my desk:

‘Twenty years from now you will be more disappointed by the things you didn’t do than by the ones you did do. So throw off the bowlines. Sail away from the safe harbor. Catch the trade winds in your sails.’

It describes the way Casey lived, and it also describes the key lesson I learned from his death: our time together is limited and we never know when it will end. Decide how you want to use that time. Say ‘yes’ as often as you can. Don’t let your life be ruled by fear.

I have tried to say ‘yes’ as much as possible in my own life, by focusing on work that has impact, and by doing what I can to make a difference.

I have lived the American dream. I grew up in rural Maine, in a Franco-American family that struggled financially. I have known the fear of almost losing my home, and the uncertainty of whether I’d be able to afford college. I went on to spend decades working on technology policy, international relations, human rights, helping to build businesses, and working in state government and in the U.S. Senate. I believe that my values and my life experiences would enable me to serve the people of Maine and the country well.

And so, seeing the significant challenges we’re facing both here in Maine and in our country, I decided to say ‘yes’ to trying to make things better. I believe we must each be a part of the change we feel is needed.

The truth is that our government and our economy have not been working for most Mainers and most Americans for a long time. If we don’t change that, my generation will be the last with a chance at achieving the American dream that I have been so fortunate to live.

These are the reasons I decided to run for U.S. Senate.

After consulting with my campaign team, I have determined that given current circumstances, there is no longer a path to victory for our campaign.

It would be wrong for me to represent otherwise.

I cannot ask my supporters to continue working hard, to continue making financial contributions, to continue volunteering, to continue advocating for my campaign when the country is focused on an unprecedented health and economic crisis, and when the type of campaign I planned, meeting voters where they live and work and speaking person to person, is impossible.

I am proud of the impact our campaign has had: releasing a comprehensive technology reform agenda, traveling across the state to meet Mainers in their communities, earning significant national media attention, highlighting the stories of Mainers who are being left behind despite working hard and playing by the rules, and running as an openly gay man with my husband by my side.

But now the question is how best to achieve my original goal for this campaign: ensuring that Susan Collins is defeated. For me, the answer is to withdraw from the primary and endorse Sara Gideon.

I have tremendous respect for Betsy Sweet and Bre Kidman. They care about Maine and our country, and are running for the right reasons.

This is also true of Sara Gideon. I admire Sara and her years of service to the people of Maine. She has served us well in Augusta and I am confident she will represent us well in Washington.”

Guidelines for inclusion in Campaign Corner

Only one member of Maine’s congressional delegation had come out in favor of impeaching President Donald Trump ahead of House Speaker Nancy Pelosi’s Tuesday announcement that the Democratic-led House of Representatives would begin an impeachment inquiry.
Apex Weather END_OF_DOCUMENT_TOKEN_TO_BE_REPLACED

Dale Crafts filed his nomination papers for Feb. 21 with the Secretary of State to officially be placed on the primary ballot on June 9, 2020, for the U.S. House of Representatives 2nd District race.
Our Sponsors END_OF_DOCUMENT_TOKEN_TO_BE_REPLACED