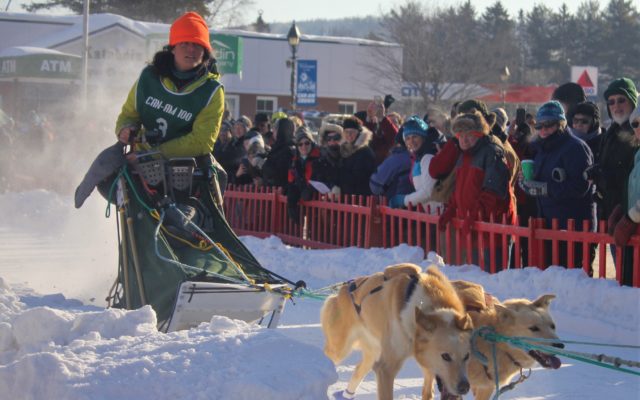 FORT KENT, Maine — A seasoned Can-Am musher was recognized at an awards banquet on Sunday morning for her first ever top place finish in the 28th annual Can-Am Crown International Sled Dog Races.

Sally Manikian of Shelburne, New Hampshire, raced to first place in the In Memory of Willard Jalbert Jr. Can-Am Crown 100 early Sunday, finishing with a time of 21:14:22.

“This is the first and potentially last time I’ll be first in a race like this,” Manikian said at the awards ceremony, held at Lonesome Pine Trails in Fort Kent. “I had some pretty big tears coming down the ski hill into the finish.”

The breakfast banquet honored all those who participated in the 100-mile race as well as the Pepsi Bottling & Allen’s Coffee Flavored Brandy Can-Am Crown 30.

Seven-time Can-Am winner Rico Portalatin of Milo took first place in the shorter race this year with a time of 2:24:11. He also won the 30-mile race in 2013. 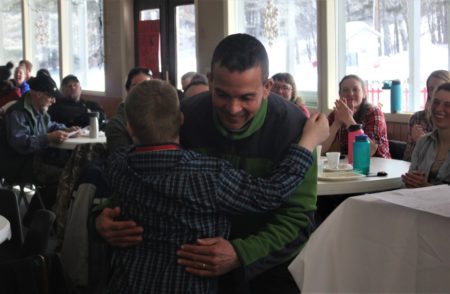 What seemed to start out as ideal weather conditions for the Can-Am races suddenly turned around late Saturday as biting winds blew snow from a Thursday snowstorm onto once packed trails, leading to drifts that were difficult for some of the dogs to trudge through.

Can-Am 100 race marshal and trail boss John Pelletier said at the breakfast that the trail crew, which was out all day grooming the trails on Friday to counteract the foot of snow that fell from Thursday’s storm, put in their best efforts, but were up against a force beyond their control.

“[The storm] put a hurting on us, but that’s Mother Nature. She’s gonna do what she wants to do,” he said.

Five mushers scratched from the 100-mile race. All 25 teams entered in the 30-mile race completed the course.

Several of the mushers expressed at Sunday’s awards banquet that they too had considered dropping from the race including musher Becki Tucker of New Hampshire. While accepting her award at the breakfast for finishing eighth in the Can-Am 100, Tucker explained what kept her moving forward.

“Sometimes it’s not gonna be totally beautiful out there, but it will be when you cross the finish line,” she said.