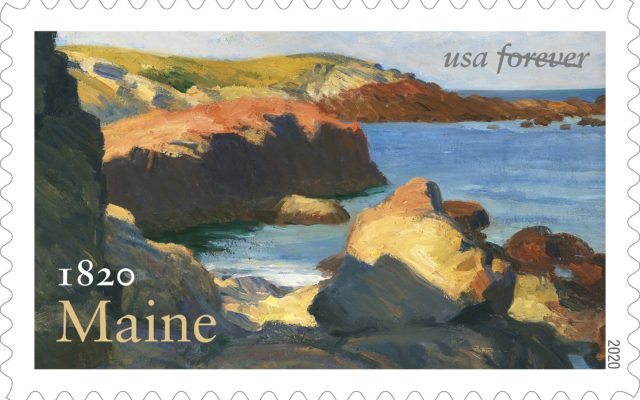 Contributed • February 26, 2020
The U.S. Postal Service will celebrate Maine’s bicentennial with the issuance of a new Forever stamp and a dedication ceremony on the actual anniversary of Maine’s statehood, March 15.

AUGUSTA, Maine — The U.S. Postal Service will celebrate Maine’s bicentennial with the issuance of a new Forever stamp and a dedication ceremony on the actual anniversary of Maine’s statehood, March 15.

The stamp dedication event will be part of the Maine Statehood Day Ceremony activities in Augusta, and will take place at 1 p.m. on Sunday, March 15, at the armory in the state’s capital.

Michael J. Elston, secretary of the Board of Governors for the U.S. Postal Service, will be on hand, along with Gov. Janet Mills and Maine Secretary of State Matthew Dunlap.

According to the Postal Service, the new stamp, designed by art director Derry Noyes, will feature Edward Hopper’s 1914 painting “Sea at Ogunquit” as a reflection of Maine’s rugged beauty.

“The picturesque rocky coastline of Maine has long inspired the imagination of writers and artists. American painter Edward Hopper (1882-1967) was among the many prominent artists who sought the tranquility of the state’s coastal towns during the summer,” said U.S. Postal Service officials.

Though the state marks 200 years of statehood this year, its history of human habitation dates back some 12,000 years to the earliest Native Americans, who are now part of the Wabanaki Confederacy, said the Postal Service. During the Colonial period, Maine territory was disputed between Massachusetts Bay Colony and French Acadia, who sought allies among and warred against Native Americans.

Following the Revolutionary War and ratification of the U.S. Constitution, the District of Maine remained part of the Commonwealth of Massachusetts. Maine became an independent state on March 15, 1820. Portland, the state’s largest city then and now, served as the capital until 1827 when the seat of government moved to Augusta, a more geographically central location.

Customers may purchase stamps and other philatelic products through The Postal Store at usps.com/shopstamps, by calling 800-STAMP24 (800-782-6724), by mail through USA Philatelic or at Post Office locations nationwide.

The Postal Service receives no tax dollars for operating expenses and relies on the sale of postage, products and services to fund its operations.