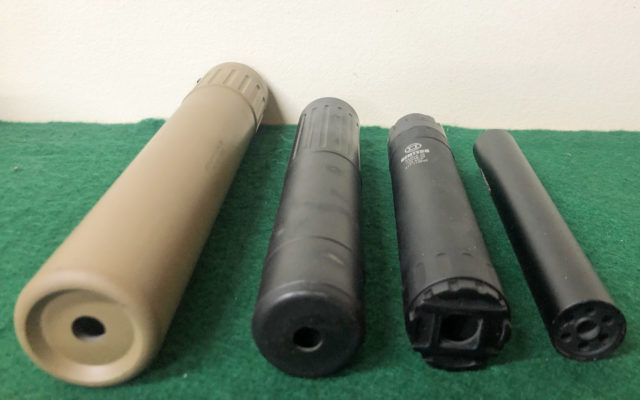 Contributed • February 25, 2020
One shooting accessory that’s been around for decades is now available from a growing number of manufacturers and is almost futuristic in form and function.

Over the last 50 years, technical advances in firearms, ammunition and scopes have been mind-boggling and often keep improving in each field annually, sometimes even more frequently. One shooting accessory that’s been around for decades is now available from a growing number of manufacturers and is almost futuristic in form and function. Often seen on TV or in the movies in possession of assassins, spies and secret agents — known on the silver screen as silencers — modern-day units are called suppressors and they are getting a lot of attention.

In many European countries, if a target shooter or hunter’s firearm isn’t equipped with a sound suppressor it’s thought very inconsiderate to others. For sportsmen who don’t understand the need of this piece of equipment, consider the following benefits. The cost of a suppressor, while not inexpensive, is far less than the cost of one hearing aid. A well-constructed suppressor will protect a shooter’s hearing by greatly diminishing concussion and damaging sound decibels.

Every single time you fire a handgun or rifle without ear plugs, ear muffs or a muzzle suppressor, there will be some damage to the delicate organs of the inner ear, often irreversible.

Reduced recoil is a second advantage of a suppressor. This yields better accuracy and, of course, less noise-related flinching. Another major asset of reduced firearm noise is the diminished chance of scaring a game animal and alerting it to your presence. There are thousands of true stories about a hunter firing at a deer, bear, varmint or small game animal with a suppressed gun, and having the animal stay put or just move off a short distance. Sportsmen utilizing sound suppressors enjoy a lot of second chances.

More and more sportsmen are getting into long-range target shooting with heavy-caliber rifles. The really informed shooters are equipping their firearms with suppressors for many valid reasons. (Courtesy of Bill Graves)

Reduced rifle report noise also benefits any other outdoorsmen on stand or stalking game nearby. Not only will animals near your blind or stand not be alerted, but other game a few hundred yards away generally will not be spooked either. There’s also an asset for landowners and non-hunters enjoying outdoor activities afield, afloat or on wheels. A large-caliber rifle or handgun produces a very powerful report and may sound much closer than it actually is, while a suppressed gun will eliminate much of the noise and bystander anxiety.

Shooters wishing to purchase a suppressor will need to submit extensive paperwork for a federal background check and pay a $200 fee for every one bought, then wait several months for a final OK. If the exact suppressor you desire isn’t in stock or is a bit out of the ordinary, that can add another three to six months. In addition, if you intend to actually hunt game animals, rather than shoot targets, a second intensely thorough set of paperwork and personal record check has to be completed by the Maine Department of Inland Fisheries and Wildlife.

After all the time, effort, money and waiting, if a sportsman is approved, an altogether new and modern style of shooting and hunting can be experienced and enjoyed. Oddly, there are still a large number of outdoorsmen who don’t realize that suppressors are fully legal for deer, moose, bear as well as all the small game quarry. Furthermore, there are even suppressors manufactured for shotguns and with all the rounds fired on trap, skeet and sporting clay ranges, not to mention in the field by waterfowlers and upland bird hunters, these sound tamers are truly beneficial for personal health and public welfare.

While purchasing a suppressor may seem daunting, folks at your local gun shop can help walk you through the process. There are also hundreds of articles online, in hunting magazines and annual firearm digests to guide the way.  There’s probably someone at your rod and gun club or fish and game club that has firsthand experience to assist as well. The state fish and game headquarters would also be another dependable site for direction and information. It’s no longer a big deal and more firearm enthusiasts each year are investigating the opportunity.

“Silencers” were invented in 1902 by Hiram Maxim, coincidentally at the same time he created car mufflers — not surprising since they are pretty much the same product in different sizes. In over a century there have been major advances in quality, quantity and availability. Suppressors are legal to own in 39 states and for hunting in 34 and the list is growing. Perhaps it is a piece of equipment that would benefit your shooting activities.

Maine is more than eight months into Medicaid expansion under the federal Affordable Care Act and trends around who is enrolling and where they live are starting to emerge, bucking some expectations and pointing out access challenges.
Apex Weather END_OF_DOCUMENT_TOKEN_TO_BE_REPLACED

The North Atlantic high will break down at the end of the week allowing high pressure from the west to build in with drier conditions.
Campaign Corner END_OF_DOCUMENT_TOKEN_TO_BE_REPLACED

Dale Crafts filed his nomination papers for Feb. 21 with the Secretary of State to officially be placed on the primary ballot on June 9, 2020, for the U.S. House of Representatives 2nd District race.
Our Sponsors END_OF_DOCUMENT_TOKEN_TO_BE_REPLACED