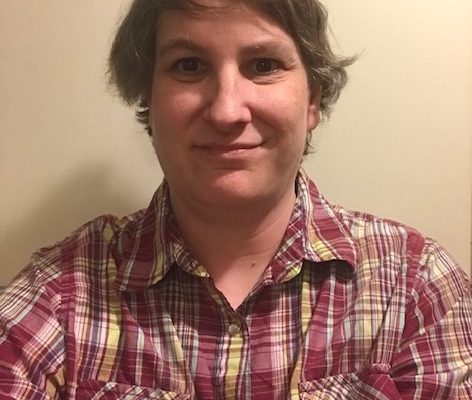 Contributed • February 5, 2020
When Kathleen Harrigan first graduated from Houlton High School in 1996 and enrolled at the University of Maine at Presque Isle, she thought she would graduate four years later with a bachelor’s degree in psychology.

When Kathleen Harrigan first graduated from Houlton High School in 1996 and enrolled at the University of Maine at Presque Isle, she thought she would graduate four years later with a bachelor’s degree in psychology.

“That’s what my major was when I first entered college,” she said. “I was majoring in psychology and my minor was in English.”

After those dizzying first few weeks in college, however, her life took a turn in the other direction, and it didn’t take long for her to realize she wasn’t studying what she really wanted to.

“I soon found out that I was more interested in English than I was psychology,” she said. “So I flipped it around and made psychology my minor.”

“I didn’t know what I would use my degree for at first,” she said. “I only knew that I loved English. So I didn’t know if I would teach or go into publishing or what. I just knew that I needed a bit more guidance, and luckily my professors at UMPI were great and they pointed me in the exact direction that I needed to go in. It was like they knew me better than I did.”

Her path led to teaching, and into graduate school at the University of New Hampshire after she graduated from Presque Isle. She taught a class at the University of New Hampshire each semester as she advanced further toward her degree. The opportunity not only allowed her to get some experience under her belt, it also assisted her in paying for graduate school, something she said was a welcome opportunity at the time.

The path, she admitted, was not always easy.

“I spent a lot of time worrying about what I would do once I got out of school,” she said. “I worried about getting a job if the job market would be terrible once I got out of school. But my sister gave me the best advice. She told me to get a degree first and then worry about the job after, and it ended up working out. Looking back, I think that is something that every college student worries about. It is only natural.”

After graduating from the University of New Hampshire, she returned to Houlton and worked as a substitute teacher in the area for a time. A short time later, however, a position for an English instructor opened up at University of Maine at Presque Isle, and Harrigan secured the job. She teaches both online and in-classroom courses.

Teaching, she said, is what she loves.

“I love teaching college,” she said. “I find it a much better fit for me than teaching high school. The students are wonderful and thank you for what you are doing. They are the most rewarding part of the job.”

She has thought about pursuing a PhD over the years, she said, but it is not something she sees in her immediate future. She said that the time commitment is a big obstacle for her, but so are the price tag and lack of local programs. At the same time, she is happy right now just having the balance in her life that she has.

“When I was in graduate school, I knew the next step for me was having children,” she said. “That is what I wanted to do next. I knew that a PhD would take several more years, and if I pursued it, it would have been something I would have needed to go out of state for. So right now, I am happy.”

Harrigan lives in Littleton with her partner, Jeremy Knowles, and their two children.

She said that she encourages all of her students to pursue the goals that are right for them, and to work hard at it.

“I tell my students all the time to choose a career they are going to be happy at,” she said. “It isn’t always about the money. It is about being happy in life and loving what you are doing.”

As the Maine Turnpike expects 1 million travelers alone over the Labor Day weekend, policymakers are gearing up for a sprint to solve one of the state’s most intractable problems: a long-standing — and growing — transportation funding gap.
Apex Weather END_OF_DOCUMENT_TOKEN_TO_BE_REPLACED

A cold front moved through the Valley early this morning, and it will be followed by an Arctic cold front this afternoon.
Campaign Corner END_OF_DOCUMENT_TOKEN_TO_BE_REPLACED

U.S. Senator Angus King (I-Maine) today visited with students at the University of Maine at Fort Kent (UMFK) to discuss his work in Maine and Washington and answer questions from students.
Our Sponsors END_OF_DOCUMENT_TOKEN_TO_BE_REPLACED