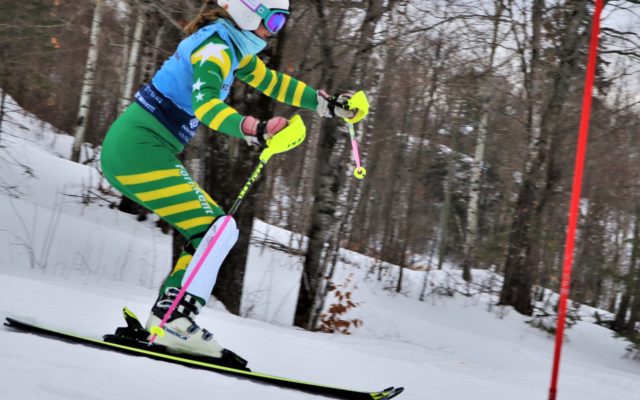 Fort Kent won all four matches of the day, commanding both the boys and girls competitions. Caribou was not far behind, coming within 15 points or less of Fort Kent in three of the four races. The Vikings finished second in all four events.

Central Aroostook, only competing in the boys events, came in third in both meets. Presque Isle came in last in all four bouts.

Fort Kent won a narrow victory over Caribou in the girls morning Giant Slalom. Gathering 788 points, the Warriors beat Caribou by just 13 points. Presque Isle High School did not have a team score because it only put three out of the four required players on the slopes.

Fort Kent won the boys morning Giant Slalom with 788 points, again edging out Caribou, who had 779. Central Aroostook came in third with 742 points, while Presque Isle had 732.

Top performances were by Carson Theriault of Fort Kent, who had 200 points. Tiernan Barbosa of Caribou had 199, while Fort Kent’s Griffin Sibley came in third at 198. Grayson McKenney was the top performer for Central Aroostook, with 196 points, while Riley Roderick led Presque Isle with 192.

Fort Kent also won big in the girls afternoon slalom, hitting 794 points to second-place Caribou’s 759. Presque Isle did not score as a team.

The top performer for Caribou was Macy Wakem, with 193 points. Higgins led Presque Isle with 189 points.

Fort Kent also won the boys afternoon slalom, the most competitive meet of the day for all involved teams. Fort Kent scored 787 points, Caribou had 772, Central Aroostook 764 and Presque Isle 749.

The top three performers in the meet were Fort Kent players: Griffin Sibley with a 200 point result, Colby Theriault with 199 points and Devin Gagnon with 198.

The top performer for Central Aroostook was McKenney, with 197 points. For Caribou, Barbosa had a combined run of 196 points. Roderick again led Presque Isle with 195 points.

The upper-level low pressure area that has been parked over southern New England will continue to stall there today into the overnight period then begin to open up and shift southeast into the Atlantic Thursday.
Campaign Corner END_OF_DOCUMENT_TOKEN_TO_BE_REPLACED

Dale Crafts filed his nomination papers for Feb. 21 with the Secretary of State to officially be placed on the primary ballot on June 9, 2020, for the U.S. House of Representatives 2nd District race.
Our Sponsors END_OF_DOCUMENT_TOKEN_TO_BE_REPLACED