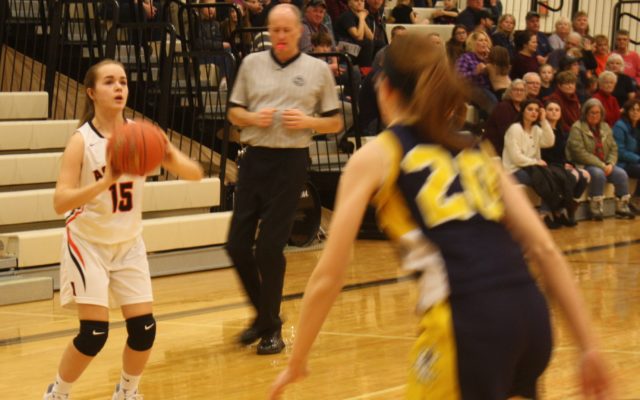 David Marino Jr. • January 29, 2020
The Ashland girls basketball team beat Van Buren 59-21 on Tuesday in a game it dominated from start to finish.

ASHLAND, Maine — The Ashland girls basketball team beat Van Buren 59-21 on Tuesday in a game it dominated from start to finish.

The Bangor-bound Hornets looked at ease against the Crusaders, who were only able to muster three points in the first half as the Hornets scored 33. Van Buren improved its offensive game in the second half, scoring 18 points. But it was not nearly enough to strike at Ashland’s sizable early lead. 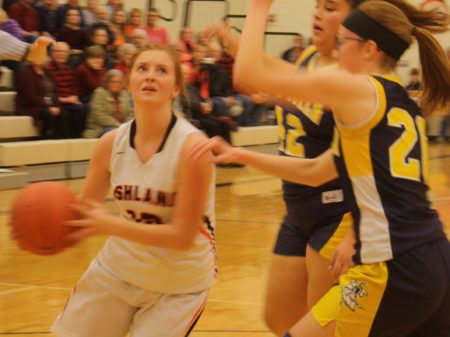 Ashland player Hailee Cunningham attempts a basket as she is defended by Van Buren players in a game at Ashland on Tuesday. (David Marino Jr. | The Star-Herald )

The match did not get better for Van Buren, who only scored one point in the second quarter while its defense let Ashland have 19 more. The score was 33-3 at halftime.

Though it was down by 30 points, Van Buren went into the third quarter knowing it would need to step up its game to compete with Ashland. The Crusaders were able to increase its offensive output, putting six points on the board. But the Hornets continued to outpace the team, scoring 12. The game was 45-9 at the end of the third.

Van Buren had its best offensive quarter in the fourth, the only in which it got in the double-digit range, scoring 12 points. Ashland outperformed, scoring 14, ensuring that the game would end with a 38-point victory for Ashland.

Ashland coach Diana Trams said her team had performed vigorously and aggressively against Van Buren, praising Condon, Carter and junior Hailee Cunningham for making significant impacts, even as Van Buren’s defense double-teamed some of them. 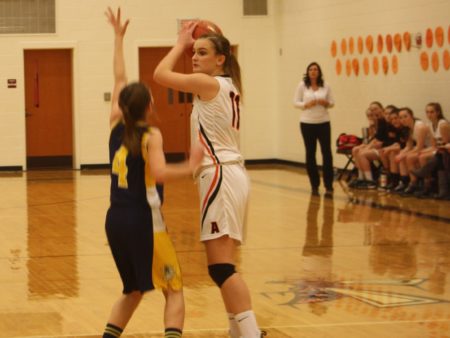 Van Buren coach Griffin Clifford acknowledged that his team, which is 1-14, had shown inconsistencies throughout the match and season. Despite good defensive play, he said offensive issues, especially the inability to rebound, had made it difficult to keep it competitive with Ashland.

With the season soon coming to a close, Clifford said he wanted to focus on rebuilding for next year with a passionate and hard-working set of players.

“These girls have been dedicated,” Clifford said. “If they keep their eyes set and work hard, the results will follow soon enough. They’ve handled a one-win season to this point better than I could ever expect a group of competitive teens to handle it.”

Ashland, 8-8 and in eighth place in Class D North as of Wednesday, still have two games left on its schedule: Washburn on Jan. 30 and Hodgon on Feb. 4. Trams said she would work to improve the team’s skills and record in the games and practices leading up to the playoffs in February.

As the Maine Turnpike expects 1 million travelers alone over the Labor Day weekend, policymakers are gearing up for a sprint to solve one of the state’s most intractable problems: a long-standing — and growing — transportation funding gap.
Apex Weather END_OF_DOCUMENT_TOKEN_TO_BE_REPLACED

Low pressure will move towards the Northeast from a low pressure over the Ohio Valley/Pennsylvania region this evening with the primary low tracking into Québec tomorrow.
Campaign Corner END_OF_DOCUMENT_TOKEN_TO_BE_REPLACED

U.S. Senator Angus King (I-Maine) today visited with students at the University of Maine at Fort Kent (UMFK) to discuss his work in Maine and Washington and answer questions from students.
Our Sponsors END_OF_DOCUMENT_TOKEN_TO_BE_REPLACED