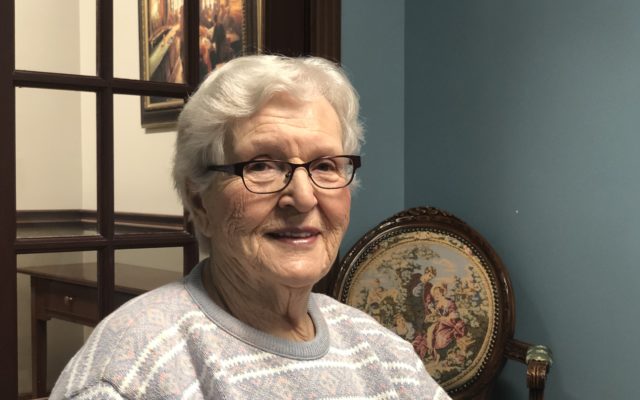 Morgan Mitchell, special to County Faces • January 29, 2020
While she said she was never “blessed” with children of her own, Alex Michaud has dedicated her life to working with children and volunteering well into her 90s.

While she said she was never “blessed” with children of her own, Alex Michaud has dedicated her life to working with children and volunteering well into her 90s, when she became president of the 90s Club at Ridgewood Estates in Madawaska.

The 92-year-old was born in St. David and lived there until she graduated from school. After graduation she moved to Presque Isle, where she worked at what was then the Northern Maine Sanatorium, a facility which primarily served patients with tuberculosis. Following her time at the sanatorium she moved around New England.

Michaud wanted to have children. Six of them, in fact.

“I love kids and I wanted six or maybe more, but I didn’t get any, so that’s why I opened a daycare,” Michaud said.

She ran a daycare in Massachusetts for many years until she moved back to the St. John Valley. During that time, however, Michaud looked after a young girl who was in a difficult family situation. As the little girl grew up, she visited Michaud every day. Now, at 50 years old, the woman, who is a lawyer and not so little anymore, visits Michaud at Ridgewood Estates. She also named her oldest daughter after Michaud.

Michaud did a lot of babysitting. Aside from her nieces and nephews, she looked after a family made up of 23 children.

“I really loved those kids and taking care of them,” she said.

Apart from her love of children, Michaud worked hard to volunteer wherever she could as she got older. When she returned to the Valley in her early 60s, she began volunteering to do aromatherapy at Ridgewood.

“I never just sat there and did nothing, I was very active,” she said.

Her husband, whom she calls her favorite memory of the Valley, moved into Ridgewood a year before she did and passed about a year after they were reunited in the residential facility.

In September 2017, Paula Gendreau the activities assistant at Ridgewood Estates, implemented the 90s Club program. After Gendreau had a conversation with the facility administrator, Jackie Roy, they decided Michaud was perfect for the position of president and nominated her for the job. She has been serving in that capacity ever since.

“Alex is such a big help. She enjoys helping gather info and helps package stuff up,” Gendreau said.

The 90s Club is a group of 29 residents from Ridgewood Estates, in their 90s of course, who perform volunteer work throughout the residence as well as in the local community. The group meets every three months and discuss what event they’d like to do to help someone in the community.

Aside from planning special parties for Ridgewood, the 90s Club packed up 240 pounds of donated clothes to send to Florida for hurricane victims in 2018. When Hurricane Harvey hit in 2017, Michaud helped make tie blankets to ship to Texas.

As the club president, she also helped to spearhead the food drive for the Owls Pantry, a program at the elementary school for students to go pick out food and take it home for supper.

Recently, the 90s Club donated school supplies to the children at Madawaska Elementary School. For Valentine’s Day, Easter and Christmas, the group contacts Northern Maine Medical Center to send cards to children who are in the hospital for those holidays.

“To see the faces of the children and the people we help, and the face that’s on Alex, is what the 90s Club is all about,” Gendreau said.

But Michaud doesn’t just stop at helping humans. The president of the 90s Club has also made dog treats for the pups staying at Corner Cove Kennels.

Michaud can often be found wandering the halls of Ridgewood conversing with everyone she sees. Because of her outgoing personality, Roy decided to ask Alex to help pass out the mail.

Gendreau said she can always count on Michaud to help when it comes to special projects.

“And I enjoy every bit of volunteering,” Michaud added.

As the Maine Turnpike expects 1 million travelers alone over the Labor Day weekend, policymakers are gearing up for a sprint to solve one of the state’s most intractable problems: a long-standing — and growing — transportation funding gap.
Apex Weather END_OF_DOCUMENT_TOKEN_TO_BE_REPLACED

A strong Arctic cold front will push into the region from the northwest tomorrow with a chance for some light snow across the region.
Our Sponsors END_OF_DOCUMENT_TOKEN_TO_BE_REPLACED