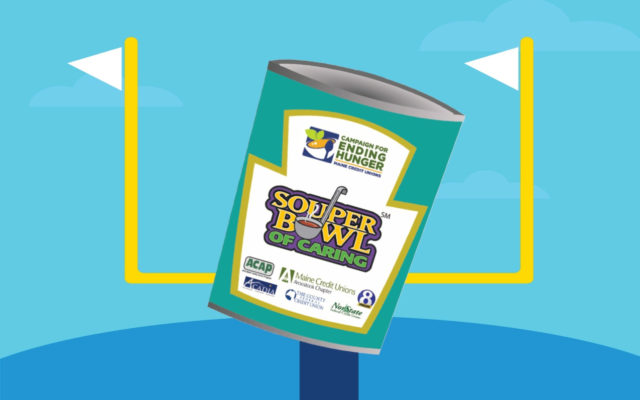 Contributed • January 2, 2020
Members of the Aroostook Chapter of Maine Credit Unions are facing off in the “Souper Bowl of Caring” to help stock local community cupboards and some food pantries throughout region to keep people fed this winter.

PRESQUE ISLE, Maine — Members of the Aroostook Chapter of Maine Credit Unions are facing off in the “Souper Bowl of Caring” to help stock local community cupboards and some food pantries throughout region to keep people fed this winter.

Acadia, NorState and The County Federal Credit Unions are tackling hunger as part of Maine credit unions’ overarching Ending Hunger Campaign by participating in the Souper Bowl, a friendly challenge to collect cans of soup at each of their locations beginning as soon as they open in the new year until Feb. 3.

“The credit union’s mission of ‘people helping people’ is alive and well in Aroostook County. Tackling hunger for our communities is extremely important, as there are many families and individuals in need, and we may never know the extent of how much of a difference even the smallest donation can make in someone’s life,” said The County Federal Credit Union Executive Vice President Dan Bagley.

“To know that you are helping someone in need is rewarding in itself, and as a community, as we all pitch in together, the impact will be felt across the entire County,” he said.

Aroostook County Action Program is coordinating the donation distribution. As many as 10 Community Cupboards throughout The County and some food pantries in communities without a food cupboard, will receive what is collected. Commercial spots will soon begin airing on WAGM-TV.

“Food cupboards are a great alternative when you’re facing hunger and are unable to access traditional food pantries due to issues such as hours of operation, restrictions on numbers of visits in a given time period, or income guidelines,” said ACAP Program Coordinator and Hope & Prosperity Resource Director Heidi Rackliffe. “Soup is a perfect food when someone doesn’t have a functional kitchen, and soup is a complete, nutritious meal in a can.”

The Souper Bowl of Caring began as a grassroots movement in a South Carolina church in 1990 to collect cans of soup during the Big Game. That first year saw almost $6,000 in donations, and has continued to grow into a multimillion-dollar national annual campaign. Last year, participants collected soup in excess of $8 million.

The Souper Bowl of Caring inspired the local credit unions to create their own event. ACAP will report collection totals to the national movement to be included in their 2020 campaign tally, but all soup and monetary donations will remain local.

“A small donation goes a long way to feed an individual in need. The credit union philosophy of ‘people helping people’ still rings strong and true,” sid Duperre. “Donate one or more cans of soup at your local credit union. Your donation will help feed people in your hometown.”

Anyone can drop off cans of soup or make a donation to the soup can drive at their local credit union in 16 locations around The County. Every $1 collected in donations will purchase a can of soup for distribution. All donations will benefit local people. In towns where there are more credit unions than cupboards, branches will be matched with nearby communities that host cupboards.

“Hunger and food insecurity is a problem in The County and I’m pleased that our local credit unions were able to team up to help fight this issue,” said Acadia Federal Credit Union President/CEO David Desjardins. “It’s another way that local institutions with the help of local people are helping to address the issue of hunger in Aroostook County.”

To build momentum and help spread the word, people donating soup are encouraged to take a “selfless selfie” to share on their credit union’s social media pages using the hashtag (#) #CUtacklehunger.

Maine is more than eight months into Medicaid expansion under the federal Affordable Care Act and trends around who is enrolling and where they live are starting to emerge, bucking some expectations and pointing out access challenges.
Apex Weather END_OF_DOCUMENT_TOKEN_TO_BE_REPLACED

The North Atlantic high will break down at the end of the week allowing high pressure from the west to build in with drier conditions.
Campaign Corner END_OF_DOCUMENT_TOKEN_TO_BE_REPLACED

Dale Crafts filed his nomination papers for Feb. 21 with the Secretary of State to officially be placed on the primary ballot on June 9, 2020, for the U.S. House of Representatives 2nd District race.
Our Sponsors END_OF_DOCUMENT_TOKEN_TO_BE_REPLACED