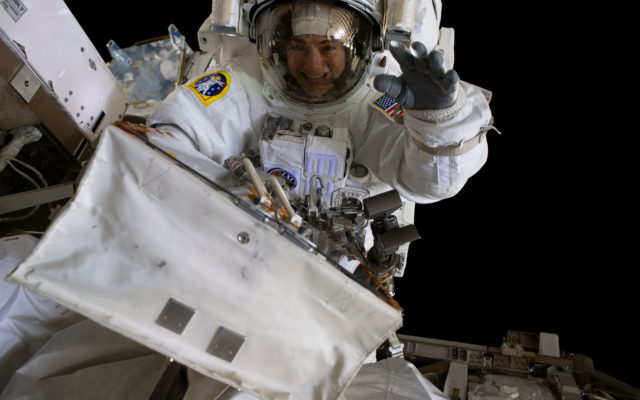 Contributed • December 18, 2019
The Senate on Dec. 11 unanimously passed a resolution congratulating astronauts Dr. Jessica U. Meir and Christina H. Koch for the historic accomplishment of completing the first all-female spacewalk.

WASHINGTON, D.C. — The Senate on Dec. 11 unanimously passed a resolution congratulating astronauts Dr. Jessica U. Meir and Christina H. Koch for the historic accomplishment of completing the first all-female spacewalk.

The bipartisan resolution, led by U.S. Sens. Susan Collins (R-Maine) and Debbie Stabenow (D-Michigan), was cosponsored by all 23 of their female colleagues and also supports the National Aeronautics and Space Administration’s efforts to fully integrate women into the astronaut corps and ensure that one of the next humans to walk on the moon will be a woman.

On Oct. 18, Dr. Meir and Ms. Koch, the 14th and 15th women respectively to conduct a spacewalk, conducted a seven hour and seven minute spacewalk to replace a power controller—the first all-female spacewalk in history.

“Dr. Jessica Meir’s and Christina Koch’s completion of NASA’s first all-female spacewalk marked an incredible moment in our nation’s history and will be venerated for generations to come,” said Sen. Collins. “This bipartisan resolution, supported by all 25 female Senators, recognizes Jessica and Christina for their extraordinary accomplishments.  They continue to inspire students throughout the country to pursue their dreams.”

“Jessica Meir and Christina Koch made history this year when they completed the first all-female spacewalk. This important milestone will leave a lasting impression on our space program and on young women across the country. Jessica and Christina have showed us what the future looks like and I look forward to following their careers and the careers of other women as they continue to make our nation proud,” said Sen. Stabenow.

Meir is a native of Caribou.  She has a degree in biology from Brown University, a master’s in space studies from the International Space University, and a Ph.D. in marine biology from the Scripps Institution of Oceanography.  She is the first woman from Maine — and only the third person from Maine ever — to go on a space flight.

In 2013, Meir and Koch were among the four women and four men selected from 6,100 applications for NASA’s 21st class of astronauts and began training for future space flights.  NASA first began to admit women into its astronaut program in 1978.

Last month, Collins talked with Meir on the phone to congratulate her on completing the first all-women spacewalk.

In October, Meir spoke via a live video with hundreds of Caribou students in grades 3-12 and answered questions. In June, Sens. Collins and Angus King and Rep. Jared Golden sent a letter to NASA in support of Eastern Aroostook RSU 39 and Caribou’s request to participate in this videoconference with Dr. Meir while she was in orbit.

In 2016, both Collins and Meir were among the six inaugural inductees of the Caribou High School Alumni Hall of Fame.

A warm front will lift across the SJV this Wednesday with overrunning snowfall likely over the course of the day, with Fort Kent and vicinity receiving accumulations around 2 to 4 inches.
Our Sponsors END_OF_DOCUMENT_TOKEN_TO_BE_REPLACED