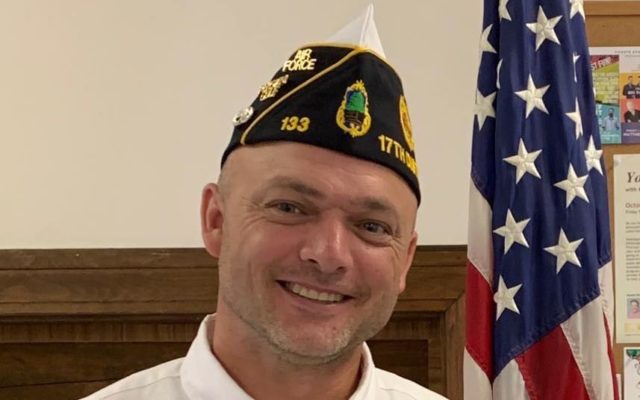 McKenzie, 45, had an unconventional childhood, having grown up in the foster care system in homes in Fort Kent and St. Francis.

“I was raised by the state of Maine as a foster child and had some truly amazing foster parents. They taught me how to respect people and respect myself. They taught me that if I wanted anything in life that I would have to go out and get it myself because nobody was going to give it to me,” McKenzie said.

“I decided to join the Air Force because I wanted to serve my country. I thought as a part of the Air Force that I would get to travel the world, and I did,” he said.

“I do a lot of fundraising for the Legion, participating in parades and memorial events, even talking to veterans that are in need of someone to talk to or help with benefit questions. You’ll always find me trying to help veterans and veteran service organizations as much as I can. It is something that makes me proud to be a part of. The American Legion is a pillar in each and every community,” McKenzie said.

“We should respect veterans because they have sacrificed their lives. their families, and everything they are to protect our country. The freedoms veterans fought for allowed U.S. citizens to sleep safely in their beds each night.”

Most recently, McKenzie organized a Veterans Day flag-raising ceremony at the University of Maine at Fort Kent and helped raise funds for veteran Tammy Landeen of Caribou, a United States Army veteran who has a spinal cord injury and is seeking to join the national Olympic Para-bobsled team.

“When I was a kid in school, every classroom had a flag, we said the Pledge of Allegiance every morning, we didn’t know from the first day why we did that or what the meaning of either was, but we learned as time went on,” McKenzie said. “Nowadays, we don’t have that anymore. So, it is all of our job as adults to teach the young children, adolescents, and even adults what these meanings are. If as veterans, we don’t talk about our experiences, they become forgotten. If they become forgotten and we haven’t taught our youth, then we have all failed. I don’t want to fail.”

McKenzie attends UMFK, where he is a junior studying computer science, and expects to graduate from the program in 2020.

“I plan to get into network/system administration or possibly webpage design. I would like to possibly work for the VA or some veteran-related organization so I can continue my work with veterans,” he said.

McKenzie married his wife, Heather (Belanger) McKenzie of Fort Kent in 2018. The couple are proud parents of a 21 month-old daughter, Lux.

“Heather is such an important part of everything I am and everything I do. She has given up everything to be the best mother and wife any child and husband could ever dream of having. Without her support I wouldn’t be able to do any of it. I want them both to be proud of me, which is a driving force for me personally,” McKenzie said.

“I was always told I wouldn’t amount to much. I have wanted to prove the world wrong my whole life,” McKenzie said. “I want my daughter to grow up knowing that her daddy tried his best to make a difference in this world, that I am part of the solution rather than part of the problem.”

As the Maine Turnpike expects 1 million travelers alone over the Labor Day weekend, policymakers are gearing up for a sprint to solve one of the state’s most intractable problems: a long-standing — and growing — transportation funding gap.
Apex Weather END_OF_DOCUMENT_TOKEN_TO_BE_REPLACED

Mostly cloudy skies will develop after midnight as a warm front moves across the area with some snow flurries possible overnight.
Our Sponsors END_OF_DOCUMENT_TOKEN_TO_BE_REPLACED