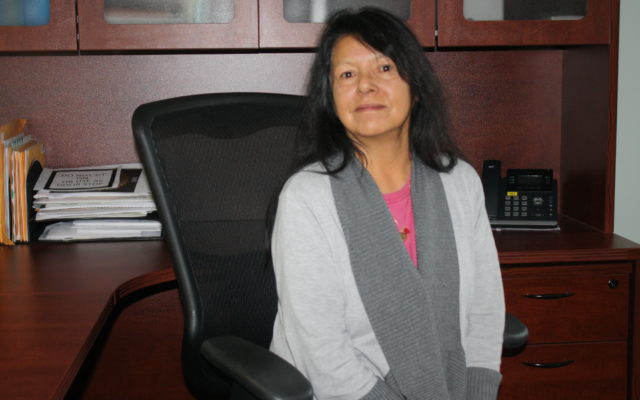 Melissa Lizotte • November 27, 2019
In 1975 Donna Sanipass packed her bags and moved to Sante Fe, New Mexico, after graduating from Presque Isle High School. She had never been to the city, or even to New Mexico, before but felt that after spending most of her childhood in central Aroostook County she needed a change.

In 1975 Donna Sanipass packed her bags and moved to Sante Fe, New Mexico, after graduating from Presque Isle High School. She had never been to the city, or even to New Mexico, before but felt that after spending most of her childhood in central Aroostook County she needed a change.

But Sanipass was also searching for a deeper connection to her Native American heritage.

“I think that when a lot of people grow up, they want to find their identity,” Sanipass said. “I had friends and family, but I needed more of the traditions that I had been missing.”

Sanipass initially studied art for two years at a college in Sante Fe. She then spent several years working various jobs and travelling throughout New Mexico, Arizona, Oklahoma and California.

During her travels Sanipass learned about the traditional customs of Native tribes in those regions and was a guest at numerous ceremonies. She recalled that many tribes at that time did not open ceremonies to non-Native viewers in order to preserve their culture, after decades of witnessing its near destruction due to American colonization. Although she was Native, Sanipass thought of herself as an outsider to those cultures and felt honored to be allowed to watch the ceremonies.

“I would have left if they had asked me to leave because I respected them so much,” Sanipass said. “All of them had different ways of honoring similar types of traditions.”

Though Sanipass did not have as many connections with Micmac people in Aroostook County while growing up, her parents — Mary and Donald Sanipass — introduced her and her siblings to many cultural traditions. Sanipass finished her first birchbark ash basket at age 8 and went on to learn different styles such as potato baskets, fancy baskets, clothes baskets and sweetgrass baskets.

Over the years Sanipass has participated in numerous basket shows and demonstrations in Maine and across the country, continuing the tradition that her parents passed down to her. Throughout their lives Mary and Donald Sanipass, the latter of whom has since passed away, took part in Native basket festivals and sold their work to people from many states as well as European countries.

“For them, basket making was part of their survival. It was how they earned their living in between seasonal work,” Sanipass said.

Sanipass spent the earlier years of her childhood working alongside her parents as blueberry rakers in southern Maine during the summers months and potato harvest workers in Aroostook County during autumn. When she began school the family settled in Chapman and her parents worked for local potato farmers and sold baskets. They sold hundreds of potato baskets to farmers each year before machine harvesters replaced most human pickers.

In Sanipass’s family, basket making is a tradition that multiple generations, including her own sons, have learned from their parents and grandparents.

“All four of my sons know how to get ash wood for making baskets,” Sanipass said. “They spent a lot of time with their grandparents, and those are their favorite memories.”

For Sanipass, reconnecting with her Micmac roots has spanned many years. She returned to Presque Isle in 1999 after living in Albuquerque, New Mexico, nearly a decade after the Aroostook Band of Micmacs gained federal recognition as a tribe.

She has worked for the tribe’s youth department and domestic violence advocacy program and now serves as the project coordinator for the culture and historic preservation office’s Tribal Heritage Grant. The grant has funded recent projects to preserve the stories of Micmac veterans and reintroduce porcupine quill embroidery.

Through researching Micmac history and restoring lost cultural traditions, Sanipass said she has found work that truly speaks to her. Living in the Micmac community again has helped her regain the cultural identity that she was looking to discover all those years ago.

“I’m proud of being a Micmac woman and of how my family passed down their strength to me,” Sanipass said.

Post-tropical cyclone Teddy is expected to cross Nova Scotia today and skirt the western shores of Newfoundland. Maine will experience little moisture from the storm.
Our Sponsors END_OF_DOCUMENT_TOKEN_TO_BE_REPLACED