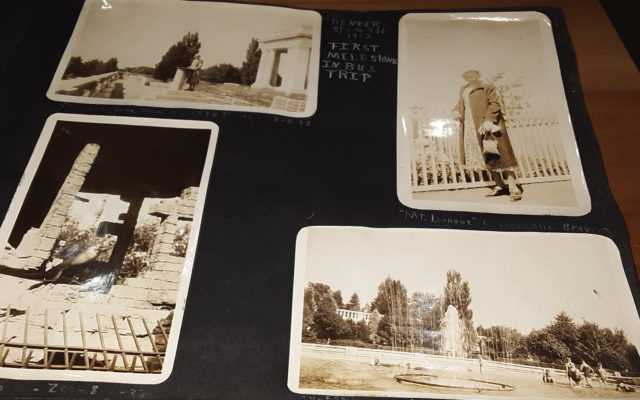 Melissa Lizotte • November 26, 2019
The last thing Kirk Lilley of Presque Isle expected to come across was a 1930s-era photo album that provides few clues about its previous owner.

PRESQUE ISLE, Maine — The last thing Kirk Lilley of Presque Isle expected to come across was a 1930s-era photo album that provides few clues about its previous owner.

This past summer a friend of Lilley’s moved out of their home on Delmont Street in Presque Isle. The friend had found an antique photo album, full of shots from the early 1930s and 1940s, in the adjacent barn, but never inquired about how the album might have gotten there.

When the new property owners moved in, they brought the album to Lilley in hopes that he might find someone who knows about the people in the photographs. 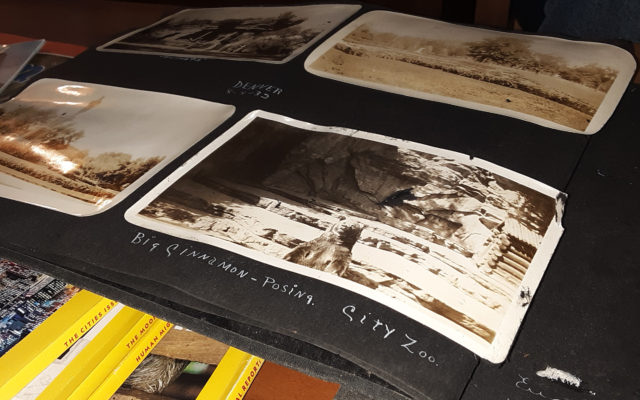 A trip to the city zoo in Denver, Colorado (bottom right) is one of many photographs in a historic and personal album that Kirk Lilley of Presque Isle recently came across. (Staff photo/Melissa Lizotte)

“There aren’t a lot of photographs, but it looks like the owner took a cross-country trip to Denver [Colorado],” Lilley said.

Most of the photographs are dated in August 1932 and feature handwritten descriptions of peoples’ names and locations. One large group photo includes names such as Mrs. Lanning, Mrs. Mackon, Mrs. Philip, Mrs. Meyyill and Mrs. Reisingar. The ladies are standing beneath a large tree in August 1932. 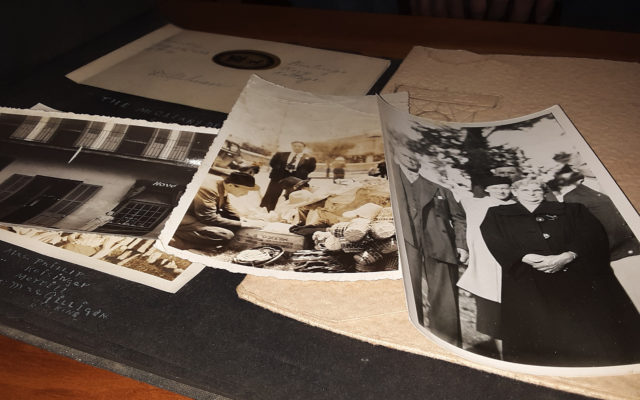 The photograph on the right, from an album that Kirk Lilley of Presque Isle recently was given, features men and women apparently from Houlton, Maine, and another (middle) seems to have been taken in Mexico in 1940.  Lilley has been in search of someone who might know of the album’s origins. (Staff photo/Melissa Lizotte)

A section of the album covers the photographer’s adventures from Aug. 4 to 16, 1932, with the caption “First Milestone in Bus Trip,” implying that they were traveling on a cross-country bus. Photographs capture a bear named “Big Cinnamon” standing tall at the Denver Zoo, a large public swimming pool and a place called “Mount Lookout.”

Many of the photographs show a possibly middle-aged woman posing solo for the camera. Her frequent appearances made Lilley wonder if she is the photographer, though the album gives no official indication. The trip occurred during the height of the Great Depression, meaning that the photographer was likely wealthy enough to travel for pleasure. The album does not clarify where the photographer was from or how long she traveled during her 1932 cross-country trip.

In one photograph the woman holds snow in her right hand, with a closed-mouth smile on her face. The caption below says, “Of course we have snow in August.” 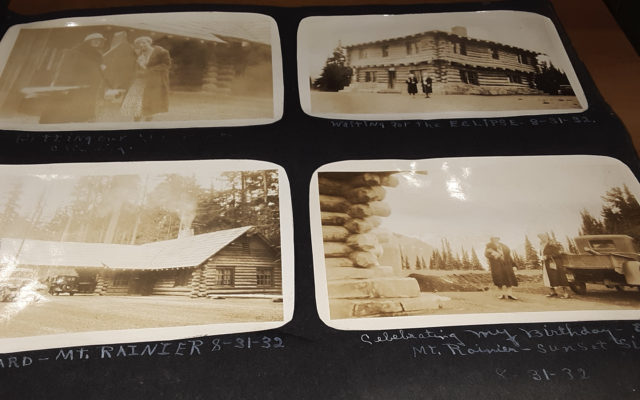 Photographs taken on Aug. 31, 1932 near Mount Rainier, an active volcano in Washington State, are part of a personal album that Kirk Lilley of Presque Isle recently was given. Lilley is on a mission to find someone who might know who the people in the photos were. (Staff photo/Melissa Lizotte)

“This person must have been very adventurous,” Lilley said. “The fact that they took a bus trip at this point in time is fascinating.”

Denver was not the only stop on the photographer’s journey. They labeled one photograph, “Celebrating My Birthday, August 31, 1932, Mt. Rainier.” Mount Rainier is an active volcano in Washington State that stands 14,410 feet above sea level and spans five major rivers. A 1940 photograph indicates a visit to Mexico.

Several pages of the album feature photographs that are unattached to the album’s black pages. One photograph that stood out to Lilley is dated September 27, 1949, and is labeled “Houlton, Maine.” Three of the five people appear to be senior citizens while the other two — a man and a woman — appear much younger. The names on the back of the photograph include Cecil Puleyeur and Flora Meritt Puleyeur.

Lilley said he showed the album to an acquaintance from Houlton whose name matches one in the photograph, but they did not recognize the people or their names. 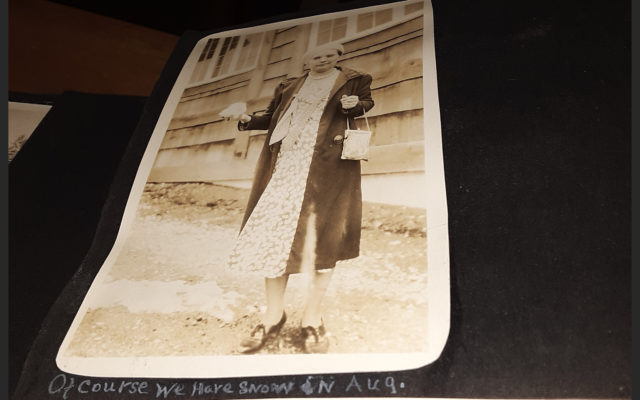 One photo in an album that Kirk Lilley of Presque Isle recently came across features a woman holding snow, with the caption “Of course we have snow in August.” (Staff photo/Melissa Lizotte)

Thus far Lilley has had no luck finding someone who might know of the album’s origins. If he does not find anyone related to the original owner, he has thought about donating the album to the Presque Isle Historical Society.

Regardless of where the album ends up, Lilley is hopeful that the photographs will tell a historical and/or personal story for whoever gets to shift through its worn pages.

“If someone told me they had a photo album that once belonged to my grandparents, I would want to have it,” Lilley said.

As the Maine Turnpike expects 1 million travelers alone over the Labor Day weekend, policymakers are gearing up for a sprint to solve one of the state’s most intractable problems: a long-standing — and growing — transportation funding gap.
Apex Weather END_OF_DOCUMENT_TOKEN_TO_BE_REPLACED

Mostly cloudy skies will develop after midnight as a warm front moves across the area with some snow flurries possible overnight.
Our Sponsors END_OF_DOCUMENT_TOKEN_TO_BE_REPLACED