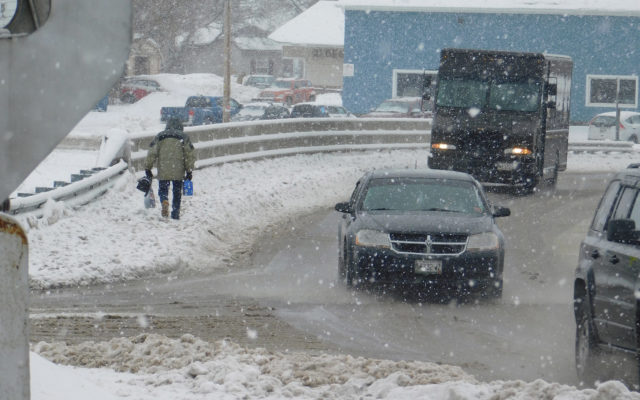 County residents should brace themselves for hazardous winter weather today as snowfall and other precipitation moves through Aroostook County.

According to Todd Foisy, a meteorologist with the National Weather Service in Caribou, The County can expect another two inches of snowfall throughout Tuesday morning into the evening.

The hazardous conditions could also affect the evening commute, the NWS said on its website.

Accidents have already been reported around The County due to the worsening storm. Since Monday night, there have been at least four car accidents and police continue to urge people to avoid driving if possible.

ASCO responded to a car rollover in Frenchville and another incident in Cyr Plantation, in which one car veered off the road and ran into a mailbox.

Another car slid into a ditch around 5:30 p.m. on Waddell Road in Mapleton, said Maine State Police Sgt. Josh Haines. He said the incident caused no damage or injuries.

A man driving a tractor trailer lost control of his vehicle while driving on Route 11 in T7 R5 Wells on Monday night, according to the ASCO. The tractor trailer, which was loaded with potatoes at the time of the crash, flipped onto its side off the roadway and broke a utility pole. Alan Jackson, 42, of Reynoldsburg, Ohio, suffered minor injuries in the crash, as did his passenger.

Both were transported to AR Gould Hospital in Presque Isle after the incident.

The Maine State Police urged residents to stay home on Monday evening until road conditions improved. The agency posted to its Facebook page that troopers were responding to three separate semi truck crashes at mile 256 on I-95 during the night.

“Fortunately, no one was seriously injured. Roads are ice covered and continue to deteriorate,” police said.

The Aroostook County Sheriff’s Office also reported an incident on Monday night when several tractor-trailer trucks were stuck on the hill near Jewell’s Hill in Monticello.

“Treacherous travel conditions currently exist in The County south of Bridgewater. Freezing rain has created a layer of ice on the roadways. Please use caution if you need to be out,” the organization said.

Ice is no longer a major concern, said Foisy, as the freezing rain has turned into snow. Residents can expect snowfall to end around 6 p.m., Foisy added.

“All of the ice is done thankfully. The freezing rain has turned to all snow here in Aroostook County … Treated roads are okay, but I imagine a lot of the side roads are pretty treacherous,” he said.

Some schools in the area were delayed Tuesday morning due to the conditions.

Presque Isle High School had a two-hour delay and all pre-K and kindergarten morning classes were canceled. Schools in RSU 29 including Houlton, Littleton and Monticello were also delayed by two hours this morning.

The University of Maine at Presque Isle opened at its regular time but closed its Houlton Center until 10 a.m. According to Rachel Rice, the director of marketing and communications for UMPI, the school will decide whether to cancel afternoon classes later depending on weather as the day goes on.

This story may be updated.

A warm front will approach the Valley today and cross the region this evening.
Campaign Corner END_OF_DOCUMENT_TOKEN_TO_BE_REPLACED

Dale Crafts filed his nomination papers for Feb. 21 with the Secretary of State to officially be placed on the primary ballot on June 9, 2020, for the U.S. House of Representatives 2nd District race.
Our Sponsors END_OF_DOCUMENT_TOKEN_TO_BE_REPLACED