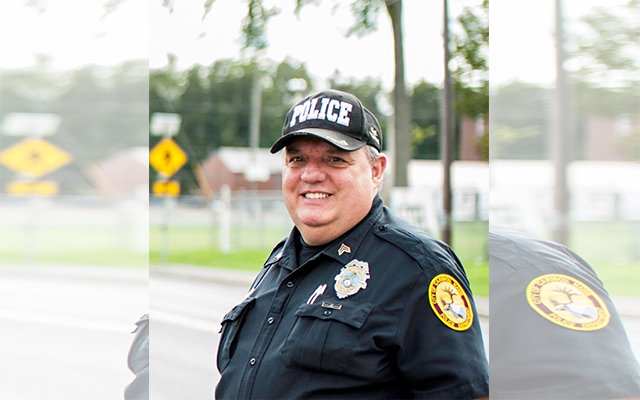 Vincent was born in January 1960 in Columbus, Ohio, a city much bigger than Caribou in terms of population.

“There’s one high school in Caribou, but when I grew up in Columbus there were 12,” he said.

Vincent moved to northern Maine at 17 years old and stayed at Loring Air Force Base in Limestone.

“My mother had passed away when I was younger,” he said, “and I had family stationed at the base at the time so I came to live with them. They’ve since moved on, but I’ve stayed here.”

In 1981, Vincent began working as a reserve officer with the Caribou Police Department, and joined as a full-time officer in 1985. He was also married in February of that year. Divorced in 2000, he has three children, including a daughter and grandson in New Hampshire.

Vincent said the people and community are what kept him in Caribou, along with his lifelong dream of becoming a police officer.

The department has seen countless changes since he began. Department of Motor Vehicle records, for example, were stored on physical microfiche cards which would display local driver information. Those details are now available on the internet, giving officers a more up-to-date view of driving records.

Officers did not wear bulletproof vests in the mid-1980s, and they also carried revolver pistols. Vincent said they now carry 40-caliber semi-automatic pistols. Despite the improvements, however, the job is still just as dangerous.

Vincent recalled hearing the “old guys” reminisce about how dispatch would turn on a light near what used to be the JC Penney building, indicating that officers on patrol had to return to the station.

He said it felt like this transition occurred overnight, adding that when he was first hired, Michael Gahagan was a sergeant. And by the time Gahagan was promoted to chief, his current position, Vincent had also become a sergeant.

“He’s pretty much been my boss forever,” Vincent said with a laugh, adding that Gahagan would often play pranks or practical jokes at the station throughout his career.

Vincent recalled one winter night during a rough storm with over a foot of snow on the ground, during which Gahagan told him to go to respond to an armed robbery at a local business.

“I figured he was pranking me,” Vincent said, “but he said ‘No, I’m serious,’ and it ended up being a real armed robbery.”

On the subject of working in the frigid county winters, Vincent said conditions are “a lot better now than they used to be.”

“We used to have rear-wheel-drive cars,” he said. “We’d get snow tires if we were lucky. It was terrible, and we would often take our own vehicles if we had to respond to a call somewhere where we knew we were going to get stuck.”

After 35 years with the department, he said he decided to retire because “it was time” to leave, as he served for 10 years beyond the point when officers are able to retire. He said he’ll miss working with everyone in the community, along with the constant contact and conversations with other officers, chiefs, and officials throughout the state.

“I enjoy helping people,” he said, “and whenever I would get discouraged or wonder why I got into this career, I’d remind myself that I did it because I enjoy working with the people here. The city employees in Caribou, they care about their jobs; they care about what they do.”

Though he served the department for well over a quarter of a century, Vincent said it all felt much shorter.

Only one member of Maine’s congressional delegation had come out in favor of impeaching President Donald Trump ahead of House Speaker Nancy Pelosi’s Tuesday announcement that the Democratic-led House of Representatives would begin an impeachment inquiry.
Apex Weather END_OF_DOCUMENT_TOKEN_TO_BE_REPLACED

Dale Crafts filed his nomination papers for Feb. 21 with the Secretary of State to officially be placed on the primary ballot on June 9, 2020, for the U.S. House of Representatives 2nd District race.
Our Sponsors END_OF_DOCUMENT_TOKEN_TO_BE_REPLACED