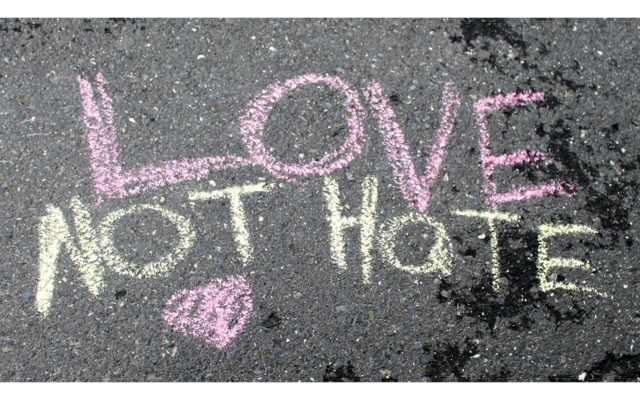 Jen Lynds, BDN Staff • October 26, 2019
Educators at the Hope and Justice Project have been hosting events throughout Aroostook County during October to raise awareness about domestic violence, honor the survivors, and mourn those who have been lost.

PRESQUE ISLE, Maine — Educators at the Hope and Justice Project have been hosting events throughout Aroostook County during October to raise awareness about domestic violence, honor the survivors, and mourn those who have been lost.

There have been vigils and walks in Houlton, Presque Isle, and Fort Kent, as well as “Rock it Up” Madawaska and “chalk it up” events held for middle school students in order to educate the public about abuse and violence.

Tammy Albert, director of education, prevention, and training at the Hope and Justice Project in Presque Isle, said the organization works to raise awareness about domestic violence, dispel myths and promote healthy relationships, and also provides training around the issue.

October is Domestic Violence Awareness Month, and the non-profit organization has been out in force to bring more attention to both the crime and its aftermath.

The Hope and Justice Project offers legal advocacy to support victims in courtrooms in Houlton, Presque Isle, Caribou, Madawaska and Fort Kent. They offer prevention education, training and consultation, along with emergency shelters and transitional housing and services.

She said Wednesday that as the month comes to a close, officials at the organization continue to look at their present and ongoing needs.

“There are so many new programs that we would like to start that we feel would benefit the community,” she said. “Those ideas are always coming up. But it takes money to start those, of course, so monetary assistance is always going to be a need.”

The Hope and Justice Project gets its funding from a variety of federal and state sources as well as grants and donations. They hold several fundraisers a year to garner support, and also apply for grants to finance additional programs.

Stephen McCausland, spokesman for the Maine Department of Public Safety, said Wednesday that domestic violence assaults decreased 11.5 percent in 2018, with 3,699 incidents reported in

Albert said that she was happy to hear the news, attributing it to the hard work of domestic violence educators, volunteers and agencies throughout the state.

Still, she said, there was a need for more housing for those affected by domestic violence. Currently, the agency has three shelters and two transitional housing units that they maintain.

“They are open to anyone who has been victimized by domestic violence,” she said. “We need more housing and more staffing for them.”

She also said that the agency would like to offer domestic violence victims more access to healthcare so that they don’t have to worry about the cost of going to the hospital for treatment after an assault.

“We’ve done some great work, but we still have more work we’d like to do,” Albert said Wednesday.

A cold front will cross the region today associated with the upper trough and low which will absorb the remnants of Isaias in Canada.
Our Sponsors END_OF_DOCUMENT_TOKEN_TO_BE_REPLACED